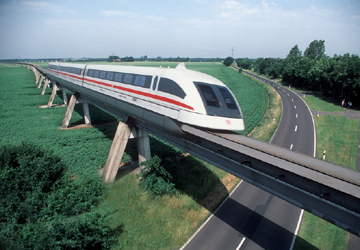 I-35 is usually packed for most of the 185 miles, and what used to take three or four hours now can take five or six. Flying down can take almost as long, when you figure in airline security delays, more flight delays, and the time it takes getting into and out of crowded airports. But what if it took 45 minutes to travel from the Metroplex to Austin by train or an hour to make a trip to Houston? Advocates of high-speed rail lines are floating these ideas once again in Texas.

No plans have made it past the wish-list phase yet, but the linking of Texas urban centers with 200-mph trains is, you might say, developing wheels. And while most mass transit projects of this magnitude come from federal or state planning, this project is gaining ground with the support of local governments.

The “T-bone” project is Texas’ latest flirtation with high-speed rail. Put forward by the Texas High Speed Rail & Transportation Corp. (THSRTC), a nonprofit group that has the backing of Tarrant, Dallas, and Harris counties, the T-bone would consist of 440 miles of rail linking Fort Worth and Dallas with San Antonio and Houston. The name comes from the map of the proposal: The main line would run down the I-35 corridor from Dallas/Fort Worth International Airport to San Antonio, with the line to Houston branching off near Fort Hood, north of Austin. 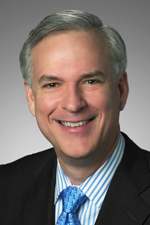 Tarrant County Commissioner Gary Fickes has been elected secretary for THSRTC, and the county is spending $25,000 per year to help fund the nonprofit. Fickes recently had liver transplant surgery and was unavailable for comment for this story, but in the December THSRTC newsletter, he wrote about airport traffic congestion that the project could help alleviate. “A high-speed train would eliminate a lot of stress and the hassle that’s associated with the current pre-boarding system now in place at our airports,” Fickes wrote. “I believe that high-speed rail is extremely bright for Texans. I have personally not encountered any negative reaction to this concept from anyone I have talked with.”

In the past, the negative reaction to such proposals came from the airlines. In the late 1980s and early 1990s, Texas worked with European companies to help develop the idea of the “Texas Triangle” – rail lines that would link the Metroplex, San Antonio, and Houston. But lobbying by American and Southwest airlines helped kill the project because the airlines thought high-speed rail would cut into their short-hop Texas business. This time around, however, T-bone supporters are courting the airlines’ support. American and Continental airlines have members on the THSRTC board and are monitoring the plan. The reason airlines are at least wiling to consider it now, according to industry sources, is that high fuel costs have made short-hop flights less profitable, and the airlines might want to link DFW to Austin passengers by train rather than by an airplane.

“The Texas High Speed Rail and Transportation idea is something that American Airlines has been and is still studying and evaluating,” American spokesman Tim Wagner said. “We have not yet decided if we support the proposed system. Regardless, though, we want to be involved in the process.” “Things have changed in so many ways since the Texas Triangle was killed,” said former Harris County Judge Robert Eckels, chairman of THSRTC. “I was in the legislature then, and everything was lobby-driven, and they made a bunch of money and no one else did. But there is a new political alignment because people like the idea of a train. And that’s why we have gone from bottom up, instead of top down. Local communities are looking to solve complex transportation problems, and they are looking for answers.”

The problems – and answers – are indeed complex. Eckels, Fickes, and other board members traveled to Spain last fall, where they met with representatives of two private companies for preliminary discussions of the T-bone project. A public-private partnership is almost a must to make it happen, Eckels said. THSRTC is pushing for a federal or state-funded study to assess building costs and potential ridership. State and federal involvement could be extremely tricky. Both Texas and the feds have their own plans for high-speed rail, though neither has been approved or is on any kind of fast track. And both have some glaring planning problems.

The Texas Department of Transportation is now holding hearings on its Trans- Texas Corridor highway system, which would move truck and rail traffic out of urban areas onto huge new multi-modal highways. While most of the mounting opposition to the TTC has focused on the toll road portion of the proposal, the TTC also would include freight and passenger lines in the roadway median. Preliminary plans call for the passenger rail line – like the toll roads – to be built and run by private companies. But some transportation experts see the idea of putting passenger lines outside of major urban areas as counterproductive, if not ludicrous. “Passenger rail needs to go into urban areas,” said Bill Barker, a San Antonio transportation consultant who has opposed the TTC. Barker also said construction engineering for high-speed rail is much different than for highways, in particular the need to eliminate hills and smooth out turns. Building the whole TTC “will be much more expensive if there is a high-speed rail requirement,” he said.

While TTC is gathering opposition, it also has strong support from Texas Gov. Rick Perry and the state transportation agency. The federal plan, on the other hand, is mostly gathering mothballs. The U.S. Department of Transportation has identified potential high-speed rail “corridors” throughout the U.S., including one that would run from San Antonio to DFW Airport. As it moves north, the line would branch, with one portion going north to Oklahoma and another heading into east Texas and Arkansas. U.S. Sen. Kay Bailey Hutchinson of Texas recently won approval of a $455,000 grant to study the feasibility of the East Texas line. But the federal corridor projects include no links between DFW and Houston. The Houston line in the federal plan would go east into New Orleans. “Any high-speed rail plan in Texas has to link up Dallas-Fort Worth and Houston,” said Dallas County Commissioner Maurine Dickey, who is vice chairman of the THSRTC board. “You can’t have a rail plan that doesn’t link the two biggest markets. When I look at the federal and state plans, I see they do not link up the major airports and urban centers. Ours is the best route and the best plan.”

What would this “best plan” cost? It all depends on how fast the trains go. New technology called “magnetic levitating” uses electromagnetism for power, and the floating trains can run at more than 250 mph. These trains cannot run on existing tracks and cost $40 million to $60 million per mile to build. A train that uses more traditional technology to move along at 125 mph can run on upgraded existing tracks and costs about $14 million per mile, according to the Texas Transportation Institute. The speed of the train will affect ridership, because that will determine how much more efficient the rail trip would be than going by plane or car. “What we really need to do is to get market studies done and compare the differences in technology and costs,” Eckels said. “That will allow private investors and the government the opportunity to see if this is an investment that makes sense to them.”

Dickey said the group is lobbying the U.S. Department of Defense to do an initial study, since the train line would link to Fort Hood. “If there is a homeland security emergency, we would be able to use the high-speed rail to move troops and equipment to the port of Houston very quickly,” she said. In a 2002 letter, Fort Hood garrison commander Col. William H. Parry III wrote that the high-speed rail line would “not only enhance our current deployment capacity, but will no doubt provide a catalyst for Fort Hood to become even stronger and more capable power projection platform for our country.”
Military support is good for PR for the T-bone, but eventually the local, state, and federal governments will have to decide whether the costs are worth the benefits for the traveling public.

Many see those attitudes changing. “I think the studies done on how many people might use high-speed rail between major cities in Texas is giving the issue a little momentum,” said Chad Edwards, principal transportation planner for the North Central Texas Council of Governments. “With gas prices going up, mass- transit options in Texas are modes of transport that are slowly catching on. What is different about [the T-bone] is that it has a grassroots movement. These projects have a better chance of getting done if there is real local support.” So could anything happen in the near future? “I knew you might ask that,” Edwards said, laughing. “There has always been a lot of talk about this, but nothing ever gets done. Maybe in 15 or 20 years, if everything goes right.”