Influenced almost equally by mystic poets and American rock and psychedelic music, Haale’s full-length debut, No Ceiling, isn’t quite inner-directed “trance” music, but it is akin to that soporific (or, if you prefer, calming) sub-genre. 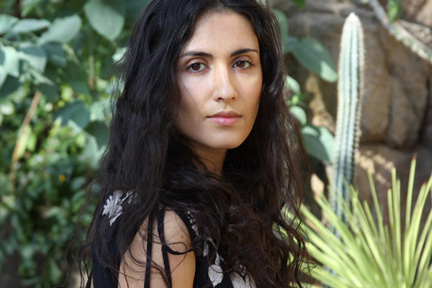 On the songs here, authored mostly by her, the downtown New Yorker of Iranian descent manages to make the mélange work. Singing mostly in English and accompanied by electric and acoustic guitars, bass, persistent percussion that never gets in the way, and occasional strings and bass clarinet, Haale often deals with, in one way or another, nature’s pull on the soul.

The title song, a simple statement about flying in peace, is an interesting but odd pairing of her trance voice with medium-tempo power chords, turning it into its own “power trance” sub-sub-genre. In “Middle of Fire,” with its ethereal, vaguely Middle-Eastern beginning coupled with her poetic imagery and slow dramatic voice, she tells us, “We need the feel of the sun, the touch of skin, the beat of the drum.” In “All These Miles,” she sings of giving our rooms to the crows and selling our beds to the wolves and of feeling the water of life raining down. In “Off-Duty Fortune Teller,” the title character’s soul “is in a silent meadow waiting for the rest of me.”

Haale’s lyrics are poetic and schooled in the direct simplicity of the Persian mystics. Her upcoming gigs, here at McDavid Studios and in Austin at SXSW, are sure to be engrossing, dramatic experiences for anyone patient enough to listen and confident enough to deal with the sense of human isolation in the natural world. – Tom Geddie

No Ceiling
(Haale/Channel A Music)