Hollywood is in a no-win situation when it comes to Iraq. (So’s the White House, but that’s another story.) 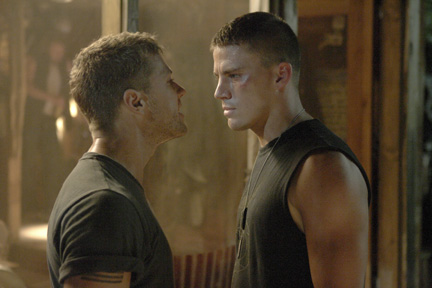 If they try to make movies about the war, they’re sticking their collective nose into politics where it doesn’t belong. If they ignore it, they’re cowards for shying away from such an important issue. Lately, they’ve opted for the former course, giving us the simplistic Rendition, the frustratingly undramatic In the Valley of Elah, the talky chamber piece Lions for Lambs, the satiric musical American Dreamz, the glum bereavement drama Grace Is Gone, and the boilerplate Home of the Brave. Audiences have responded by staying away in droves and appear to be neglecting Stop-Loss in the same way, though it’s easily the best of these movies, deeply flawed as it is.

Ryan Phillippe stars as Staff Sgt. Brandon King, a decorated Army hero who has run more than 100 combat missions in Iraq and receives a hero’s welcome along with his best friend, Sgt. Steve Shriver (Channing Tatum), when they return to their hometown of Brazos, Texas. On the day that Brandon’s tour of duty is supposed to end, however, he’s rudely surprised to find that he’s been “stop-lossed,” ordered to be shipped back to Iraq to make up for the shortage of soldiers needed – in lieu of a draft that the current administration won’t institute – to fight the insurgency. Angry and disappointed with the Army, Brandon goes on the lam with Steve’s fiancée, Michele (Abbie Cornish), who suddenly becomes afraid of Steve after his first day back, when he gives her a black eye and then spends the night digging a foxhole in the front yard. While Michele drives him around the South, Brandon tries to figure out whether he wants to cross the border and never see America again or return to Iraq and possibly be killed on his enforced second tour.

This is only the second film by director/co-writer Kimberly Peirce, who created a sensation in 1999 with her brutal and breathtakingly beautiful debut, Boys Don’t Cry, and then saw a bunch of planned Hollywood projects fall through. This material plays to many of her immense strengths. She has a keen eye for the atmosphere of small-town America and quietly conveys the attachment Brandon feels for his hometown and his parents’ ranch. She has a strong stomach for violence and a tightly controlled visual style, which makes the Iraqi combat sequence near the beginning harrowing and gnarly. (Female directors aren’t typically known for hard-edged action scenes. Peirce does it as well as any man.) She has a terrific ear for music and makes superb use of Drowning Pool’s “Bodies,” with its repeated chorus of “Let the bodies hit the floor.” And she has an unerring sense of the ways in which straight guys relate to one another. The macho camaraderie among the soldiers always rings true, and the very last shot of the film, with Brandon giving Steve a friendly jostle with his shoulder, speaks volumes without a single word.

The thing is, if you look closely at the DELETE Peirce co-wrote with Mark Richard, it’s every bit as boilerplate as the one for Home of the Brave. Her direction makes Stop-Loss a much stronger film, but the movie tells us nothing new about soldiers who can’t adjust to civilian life. Steve’s post-traumatic stress symptoms mysteriously disappear from the film in favor of a storyline about a corporal (Joseph Gordon-Levitt) who comes home an alcoholic, suicidal basket case. Even Brandon has an unsettling break with reality when he gives three muggers the scare of their lives in a back alley. The subplots (including Michele’s troubled relationship with Steve) play out exactly the way you might imagine, and the film’s attempts to be specific about the current war don’t offer any fresh insight.

Great acting might have put all this over anyway, but the performances here fall short. Phillippe is alert enough to recognize what he needs to do and then do it. If the scene requires him to crack, he cries beautifully. If the scene requires him to lay down the law with the soldiers under his command, he squares his shoulders and puts steel in his voice. Despite all that, his fundamental inexpressiveness defeats him. You never believe him as a guy who’s at the end of his rope, who’s seen so much blood that he can’t take any more. The urgency is missing from him and from the movie. The same goes for Tatum, and even Gordon-Levitt is off his game. (He did self-destructiveness much more vividly in Mysterious Skin.) The only actor who really pops is Cornish, an Australian actress with a pitch-perfect Texas accent who locates her character’s inner resolve.

This movie isn’t lefty anti-war propaganda, because Peirce (perhaps too responsibly) presents every possible perspective on Brandon’s plight, so that what emerges is an ethical miasma – Brandon really has no good choices left. The grayness and ambiguity are good; they lift Stop-Loss above most socially conscious Hollywood flicks, with their easy heroes and villains. Yet the movie could have done so much with a dose of vituperation at a system that forces these situations on so many men and women in military service. Admirable as this film is, it stops short of greatness.