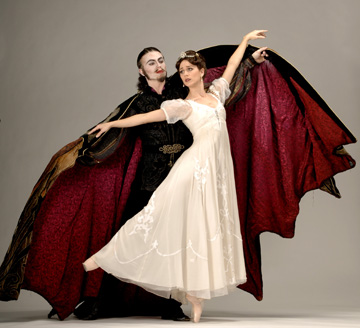 The main difference between then and now is the quality of dancers the company has developed. A revival of the evening-length spookfest lit up, or perhaps we should say, darkened the Dallas Music Hall stage for a few days two weeks ago, and it will wrap up the company’s season this weekend at Bass Performance Hall.

Newcomer Letitia Oliveira and veteran Andre Silva, who starred as the young lovers Svetlana and Frederick in Dallas, are major-league players. Oliveira performs with incredible balance and delicate footwork, and Silva, in addition to showing amazing speed, can execute high-powered jumps. Equally impressive are the husband-and-wife team of the ethereal Julie Gumbinner and the strapping Lucas Priolo, who starred as the lovers on a different night. (Their Dallas performance marked Gumbinner’s return from maternity leave.)

Dr k, but there’s enough balletic pizzazz to fill an evening, and the production is stunning. The vampire’s eerie lair is a gothic pile with a vaulted ceiling and murky draperies, and the town square is a medieval jewel. Dracula himself sports about 40 pounds of costume, mostly wings, making him look like an Amazonian moth. In the title role, Carl Coomer was wonderfully menacing and lustful (especially in an eye-opening rape scene) and had a touch of madness about him. Must-see talent Enrica Guana Tseng danced the ravaged maiden with operatic intensity.

Over the past few years, the trick for TBT has been to maintain a Dallas presence without losing any footing in Fort Worth, where its original support and biggest audience lies. The company’s choice of theaters in Dallas is limited to either the elegant Majestic Theater, with its meager stage and minuscule orchestra pit, or the cavernous old Music Hall. Considering TBT’s small Dallas audiences, the company typically dismisses the hall as too expensive (though The Nutcracker is always well worth the expenditure). Mounting Dracula in the Music Hall pointed up the problem. Even with the balcony closed, the lower level looked half-full. However, TBT will be shifting its focus eastward soon. The company will be a principal tenant in the Winspear Opera House, a world-class venue scheduled to open in Dallas next year. For a company of TBT’s caliber, the Winspear should be ideal. Until then, TBT will continue performing a majority of its repertoire in the Majestic.

In September, TBT will use the Majestic for a season-opening gala, a fund-raiser to spark local interest and hopefully bring in big bucks. The program is still up in the air but will include several showstoppers. A month later, at Bass Hall, the company will stage Stevenson’s inspired anti-war interpretation of the Mozart Requiem, a piece that premiered at the Majestic last year with canned music. The Fort Worth version will feature a full orchestra, chorus, and vocal soloists. Both cities will get to see revivals of Nutcracker, Swan Lake, and Cleopatra. Squeezing Stevenson’s opulent Swan Lake onto the Majestic’s postage stamp-sized stage will be a feat in itself.

The challenge of developing a company to serve all of North Texas was part of the reason Stevenson came here. In erecting the Winspear, the City of Dallas has done its part. Now it’s up to the donors and ticket-buyers.