Admittedly, the four members of Soulever Lift realize they’re just another local band following every possible avenue to achieve some sort of success in the independent music market. 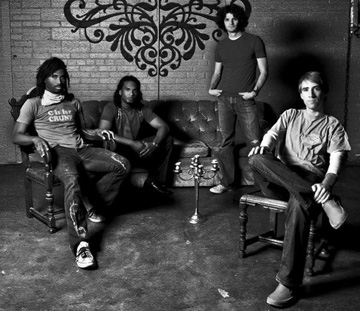 The Fort Worthians all grew up listening to and playing music – they are no strangers to the craft. Now all college graduates loaded with business and musical skills, the guys in Soulever Lift are putting one collective foot in front of the other with their eponymous debut album.

Guitarist Mark Lettieri and singer Yendor Reese met at Texas Christian University, where both were members of the gospel choir. Reese, having developed his singing abilities as a child in church, was a vocal performance major for several years. Lettieri, who relocated here from Menlo Park, Calif., was a business student who assumed the role of the gospel group’s organizer. When the complications of coordinating schedules proved too difficult, Lettieri and Reese left the choir to form their own band, which, Lettieri said, simplified things exponentially.

As Red Tape, the duo plied its trade at Schooner’s, a now-defunct dive near TCU on University Drive. Drummer John Wesley and bassist Cole Davis joined not long after, prompting – along with the existence of a California band called Red Tape – a name change. Enter: Soulever Lift. (Though the name has strong spiritual connotations, Lettieri pilfered it from the back of a tissue box.) The name definitely fits the band’s vision: “uplifting thoughts,” Reese said.

Rather than promoting personal agendas or grinding metaphorical axes, Soulever Lift’s songs are focused on capturing life’s everyday moments. All four members are practicing Christians but do not proselytize.  “We are a band of Christians, not a Christian band. We’re all semi-based on church music,” Lettieri said, but the band members “try to blend that with a type of rock with a classic appeal and a modern sensibility.”

Most bands strive to be unique, and by playing to their various skill sets, the Soulever Lift musicians acommplish that: They turn out soul- and R&B-inflected grooves fueled by rock ‘n’ roll energy. Lettieri said listeners have compared his band to greats as diverse as Yes, Jamiroquai, Steely Dan, and King’s X. The guitarist, who also works regularly as a freelance session musician, arranges most of the music. His well-thought-out axe parts are what give most of the songs their weird edges.

The band has been playing out a lot recently and has almost outgrown its CD, recorded at a friend’s studio in the back of a church. The result is rough, but considering that the songs’ hearts are strong, it is still something about which the band can be justifiably proud. “We’re cool with making music we like and our friends like,” Lettieri said. “There is a middle class of musicians. You don’t have to be a rock star or be poor.”