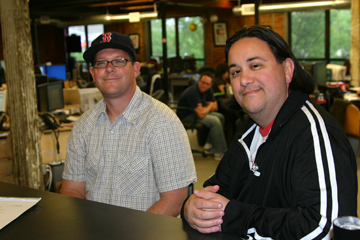 The company that touts itself as the “future of marketing” is headquartered on Magnolia Avenue in the historic South Side and works with companies nationwide, including the nonprofit Fort Worth South Inc. Starr Tincup’s lofty award didn’t impress some local writers, editors, and designers who recall being stiffed for money in 2005 and 2006 while working at Jet Powered Group, a marketing firm that was a precursor to Starr Tincup, and owned by the same duo, Brett Starr and William Tincup. “I can’t believe they’re still in business,” Fort Worth-based web developer Todd Harris said.

Jet Powered, which was headquartered in the Chase Bank Building at Sundance Square back then, stiffed numerous employees for amounts ranging from a couple hundred bucks to thousands of dollars. Those victims responded by creating an online message board about the company and its practices. (Note to corporate America: It’s unwise to piss off a bunch of writers and computer designers.) Those angry posts are still retrievable with a quick Google search. “I’d like to punch William Tincup’s … face,” wrote a poster using the name Makes Me Sick. The writer said Starr “needs some major ass-whopping.”

Some posts were even less rational, with much venom directed specifically at the two guys now hailed as Southside marketing darlings. Tracking down victims willing to go on the record wasn’t difficult. Two currently work at Fort Worth Weekly. “They still owe me $250,” staff writer Dan McGraw said, recalling how he wrote copy for Jet Powered in 2005 and received only half his promised pay. Copy editor Margaret Allyson said she was owed a similar amount but had long since given up trying to collect. She kept her unpaid invoice in a computer folder for two years, but she eventually deleted it.  “Whenever I would see that ‘Jet Powered’ folder it would make me mad, and so I deleted it for emotional good health,” she said. “I didn’t want to be reminded of something that pissed me off.”

Local freelance designer Robert Morrow has had to file lawsuits in small claims court only twice in 15 years to get paid, he said, including two years ago when Jet Powered offered him plenty of excuses but little money after he worked for them. He estimated about 30 other co-workers were shorted, he said. “That’s why that web site started, because all these freelancers were getting screwed out of their money,” he said. “Some people just gave up.” Morrow was paid only after he sued. “They were served papers, and then the check came,” he said. “That seemed to be the only way people were getting paid. Until that point you would get a huge runaround.” He wasn’t surprised to hear Starr and Tincup had reorganized and changed the company’s name.

“In the freelance community in the D/FW area, we essentially spread the word and said, ‘Do not do work for Jet Powered Group,’ ” he said. Harris, too, said he received his $2,000 in pay only after plopping down a filing fee in small claims court. He hadn’t thought about the company for a while, he said. Then, earlier this month, he heard they were now working with Fort Worth South, an influential group devoted to revitalizing the Near South Side and whose board members include business elite and city leaders. “Knowing some of the people who are on the board, [Starr Tincup] needs to watch themselves because they are dealing with some heavy hitters on the Fort Worth scene,” he said.

And so … a funny thing happened while researching this story. Word got back to Starr and Tincup that the Weekly was questioning former workers, and they proactively sent e-mails requesting a meeting. Then, with a tape recorder rolling and a camera clicking, they sat down and admitted that Jet Powered had been poorly managed and was a financial bust.  “We didn’t have strong financial accounting,” Starr said. “Our business model was flawed beyond belief,” Tincup said. Disorganization led to unpaid bills and growing debt, disgruntled workers, a slide in service, and lost clients, and “we faced a perfect storm,” Starr said.

They cast blame on a third owner who has since departed the company, but Starr and Tincup also accepted responsibility. They apologized for how the business went awry but lauded themselves for solving their problems, avoiding bankruptcy, reorganizing, building a new list of clients, and hiring a full-time staff rather than relying solely on freelancers. They said most of their debts are paid, including all their outstanding invoices to freelancers. However, several people were still owed money at the time of the interview. Tincup said Jet Powered’s shoddy accounting meant that records don’t show all who went unpaid, and that he hopes this article will let everyone know that the company is intent on squaring its debts. “We’ll pay any debt we’ve ever incurred,” Tincup promised, adding that he would work on an honor system and even cut checks to freelancers whose invoices had been lost.

“We care about Fort Worth, and we care about the subcontracting community,” he said. “We were never bad guys – we were young and ambitious and trying to make a business work” with a flawed model, he said. “Young” might be an exaggeration, since both were in their 30s at the time and, according to one of their fulltime staffers back then, very intelligent. “In six months working there I learned a whole lot about marketing,” former marketing consultant Stephanie Fanning said. She recruited some of the freelancers and then felt awful when they weren’t paid on time, or at all. “It was an uncomfortable and unpleasant situation to get them checks.” For that and personal reasons, she resigned. “They had to pay me back in installments for some expenses, but they did settle up before I left,” she said. “It was a headache.”

Starr and Tincup approached Fort Worth South about a year ago, shortly after moving to Magnolia Avenue, and asked about helping with the nonprofit’s marketing. “We were trying to launch a promotion campaign,” Fort Worth South president Paul Paine said. Starr Tincup was one of three companies that submitted a bid to establish a logo, redo a website, and perform other services. Starr Tincup’s bid was accepted in part because the company owners are doing some of the work for free to establish themselves as good guys willing to help the community. Paine said he had no idea about Jet Powered’s previous financial woes or its poor reputation among local writers and designers. But he has no complaints about the work Starr Tincup has done for Fort Worth South so far. “They’ve been great,” he said.

As for meeting its promise to pay off debts to freelancers, the company’s results are mixed. Starr Tincup hand-delivered a check to McGraw three days after he sent them a three-year-old unpaid invoice for $250. Allyson called Starr Tincup on April 18 and April 21, leaving messages both times. At press time, no one had called her back.