There’s a scene early in Baby Mama where two women – a white-trashy vamp and an upscale VP – watch a dad play baseball with his son on America’s Funniest Home Videos. 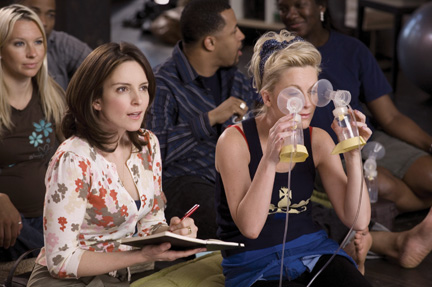 The exec, Kate (Tina Fey), says the kid will hit the dad in the balls, and when he does, the vixen, Angie (Amy Poehler), is astonished at Kate’s prescience but still laughs.The scene may make you wonder if writer-director Michael McCullers, who wrote the Austin Powers series, is either very self-aware or very naive. Baby Mama is about as formulaic and predictable as a buddy-comedy can be, but, as Angie says, some of the jokes are funny even if you see them coming.

Thirtysomething Kate put off having a family to pursue a career but now has the baby itch. Fertility treatments aren’t working, she’s put off by having to wait years to adopt, and men aren’t exactly banging down her door. At her wit’s end, she goes to an agency run by Mrs. Bicknell (Sigourney Weaver) that hires out surrogate mothers. Kate meets and likes the lower-class Angie, who agrees to carry Kate’s baby. But after Angie dumps her boyfriend Carl (Dax Shepard) and moves in with Kate, their personalities clash. Kate reaches the unsettling realization that getting the baby to term may be harder than she thought.

From the beginning it’s hard to believe that a seemingly successful and intelligent woman like Kate wouldn’t immediately notice that she might not get along with someone as unsuccessful and ignorant as Angie. They have almost nothing in common. The movie also needlessly complicates itself, from Kate’s mission to open an organic-food store for her New-Age-y boss (Steve Martin) to a plot twist halfway through. Another thread that’s abruptly introduced – about Kate and the daughter of a potential suitor, Rob (Greg Kinnear) – is just as abruptly dropped. Instead of adding depth, the subplots merely detract from what should be the meat of the movie: Kate and Angie’s relationship. And then there’s the annoyingly upbeat singer-songwriter hash blaring throughout.

As for the jokes, when they’re not met with audience silence, they’re veering wildly from sitcom-saccharine to Will Ferrell-wildness. Kate and Angie will be “comedically” bonding on SingStar Karaoke one moment, and, the next, Angie is peeing in the sink because she can’t open the child-proof toilet. Also, every buddy-comedy cliché gets trotted out. Roommate sleeping on the other’s bed? Check. Repeated jokes about Kate’s uterus that weren’t funny the first time? Check. Emotional gay couple? Check. And then the movie piles on more absurdities, like the Lamaze-class instructor with an Elmer Fudd accent.

However, there are some bright spots. Fey and Poehler have a great rapport, probably due to their years together on SNL, even though Fey is slightly awkward as an actress. They’re both clearly having fun, and they both look great. Most of the supporting performances are good, especially Shepard as Angie’s lowlife yet painfully human boyfriend and Kinnear’s humble Rob. Martin and Weaver, though, flounder a little.

For lovers of cute movies, Baby Mama will do. For movie lovers, there’s much better fare (ahem, Forgetting Sarah Marshall) out there.