Home Arts Books Nuts
SHARE
Facebook
Twitter
If the phrase “West Texas feminist” causes your eyebrows to raise, It’s A Jungle Out There isn’t your kind of book. 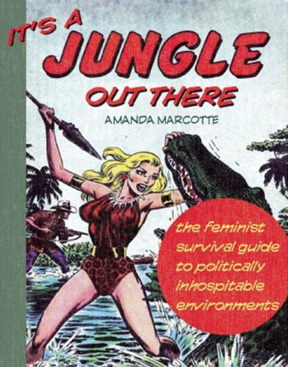 Don’t be misled by its cutesy adventure-comic picture cover of a big-breasted Amazon poised to spear a crocodile. Amanda Marcotte, who hails from West Texas and currently lives in Austin, is, among other things, editor and writer of several liberal and feminist blogs, including Pandagon and Offsprung. Marcotte says that anybody with a feminist perspective has to “survive quite a bit of [sexist] bullshit” in the blogosphere. It’s A Jungle Out There is her series of brief essays on sexism, both in the blogosphere and the real world. Employing humor and sarcasm as steely weapons, Marcotte shares thoughts on how to identify sexism in its varied forms, how to resist it, and how to fight against it.

A feminist blogger in Cowtown – heck, a feminist blogger anywhere in Texas – might fly under the radar. However, Marcotte incurred her 15 minutes of fame last year when the now-defunct John Edwards campaign hired her away from her job as a financial-aid counselor at the University of Texas to be his on-the-trail blogger. Because she was working for a politician, she writes, the conservative blogosphere ran a campaign to discredit her for her outspoken “pro-woman, pro-gay views.”

At first Marcotte describes the effort as “some right-wing bloggers throwing shit against the wall,” trying to elevate her personal blog comments into a mainstream media scandal. No one noticed until Bill Donohue, president of the Catholic League for Religious and Civil Rights, assembled Marcotte’s out-of-context bits into the position statement that Edwards was in league with an “anti-Catholic trash-talking bigot.”

The fallout caused her resignation from the campaign. Given the amount of violent, hateful e-mail messages Marcotte received, a lesser woman might have simply retired from the blogosphere. Instead, she fought back, and she describes her survival strategy in detail in It’s A Jungle Out There.” Channeling Molly Ivins as much as Gloria Steinem, Marcotte sets out to refute any possible excuse an honest woman would have for allowing herself to believe that we live in a world where women are valued for more than just their ability to reproduce and are paid just as much as men for doing the same job.

Apparently, a group of Americans (mostly men but some women) believe that, sometime in the 1960s, women achieved full equality. If women are completely equal in America, then feminists must just be “out to get men.” It’s a similar mindset to that of folks who believe that passage of the Civil Rights Act actually ensured racial equality. Marcotte introduces readers to a host of interesting characters such as the so-called “Feminists for Life,” who believe that repealing Roe vs. Wade is “somehow feminist.”

She also discusses Robert White, former president of Concerned Women for America, who argued three years ago that the Girl Scouts (a fairly conservative organization) are a feminist organization promoting abortions and “lesbianism.”
Even the otherwise lefty People for the Ethical Treatment of Animals doesn’t escape Marcotte’s keen eye. She links PETA to the anti-choice Operation Rescue, singling them both out for their “strong, irrational loathing for science.”

Finally, she takes on the Quiverfull movement, a group of evangelical Protestants who do not believe in birth control, not even the natural family-planning methods approved by the Catholic Church. These white Christians believe that their kind should bear as many “little warriors” as possible. Not surprisingly, members call their children “weapons for God’s victory.” Victory over what, you might ask. Pretty much anything non-white and non-Christian.

Marcotte also attempts to debunk some myths about feminists, including the one that feminists think there’s no difference between men and women: “Very much untrue. Feminists in fact are … trying to get Congress, the Supreme Court, and the nation at large to understand … that uteruses exist in only female bodies and therefore women should be the decision-makers on how said uteruses are used.”

Or the myth that feminists hate children: “Only people who have lost touch with reality could think that it’s child-hating to demand a world where every child born is wanted … and where society cares about what happens to children after they’re born.”  And the problem that a feminist might have in selecting appropriate footwear is addressed, tongue firmly in cheek, in the chapter “The Perils of Dressing While Feminist.” Birkenstocks are admittedly comfy, but they “repulse sexual attractiveness.” High heels? “Bad feminist!”

Finally, Marcotte describes the men who are threatened by her – or by any woman with an opinion. They often cloak their sexist and/or racist hostilities behind the veil of Christianity and make overtly violent threats from the privacy and relative anonymity of their computers, she writes. Many of them tell her that she should just “shut up and blow” someone or offer to put their penises where they don’t belong.

Certainly, not every Christian who disagrees with Marcotte would threaten her with sodomy. However, it’s important for people of faith, and everyone else, to realize that, while threatening someone with whom you disagree is fundamentally un-American, it’s a regular occurrence in the blogosphere.  She also limns the potential consequences for people who speak up – if you do, she argues, you’d better be ready to be treated like a little critter from one of those whack-a-mole arcade games.

The language in It’s A Jungle Out There is not for the easily offended. The book is bitingly funny, which may surprise people who believe that, as a group, feminists are unfunny. But it’s only funny because Marcotte is probably right. She has a message for everyone about what’s out there for us – including losing any of the gains made over the past four decades – if we stay quiet.