Chances are that most folks know of Darth Vato as that crazy-ass party band that plays TCU a lot. 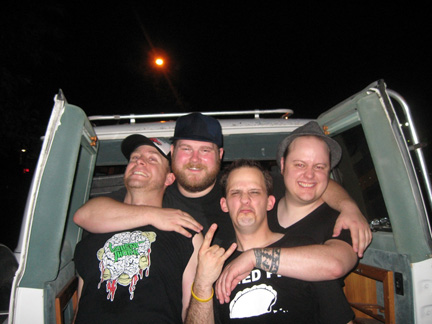 Yes, the trio frequently haunts the clubs by Texas Christian University, and, yes, DV shows are uniformly raucous and, on the Fun-O-Meter, right up there with bottomless margaritas and coed naked Twister. The self-proclaimed “back-stabbing pinche gringos” purvey a brand of blue-eyed, SoCal reggae that at its hands-up-in-the-air-now-do-the-pogo best defies the listener’s booty to remain stationary.

Because of or despite themselves, the DV guys have an image as that of a beer-soaked good time, which inherently contradicts the presence of musical depth and that may contradict the presence of theirs – but at your own peril. Beneath the luster of the choppy riffs and head-bobbing beats is a complex engine whose designers know a thing or two (or 12) about technique and that runs on gallons of passion, Lone Star beer, and good ol’ fashioned elbow grease. Rhythms that hiccup and pivot seamlessly, extended periods of zonked dub, lyrics that actually have something to say – you don’t achieve that kind of mastery by just hanging out and goofing off. (Only in the screwed-up world of independent rock ‘n’ roll could three guys who turn the party out be considered anti-indie/mainstream-y.)

And you’d be hard-pressed to find a local rock outfit as prolific and successful. Darth Vato has been together for six years, a veritable eternity for any local band anywhere, and the band has played a zillion shows all over the country, has an enviable national following, and has dropped four records (two EPs, two LPs), including the recently released Oh No … We’re Doing Great! Recorded over the course of about three months by Jordan Richardson (Oliver Future drummer) and Josh Robinson at Skyline Studios in Dallas, Oh No was mixed by Adam Lasus (Clap Your Hands Say Yeah, Clem Snide, Oliver Future) and mastered by Gary Long at Dallas’ Nomad Studios. Evidently, jumping on the DV Bandwagon is as easy as seeing it swervin’ toward you.

Maybe geography is partly why DV isn’t taken as seriously as lesser, dour bands here. The vatos take their cue from such staunchly non-Texas and West- and East-Coastal-bred acts as Sublime, Pepper, and Bad Brains, hearkening back to a rock lineage whose roots here are comparatively shallow. Still, punk attitude is punk attitude, and no matter where you’re from, Oh No … We’re Doing Great! is a masterstroke writ in sly lyrical left hooks and casual rebellion. (DV will join your revolution – right after a nice, long siesta.)

As with the band’s previous records – Aloha Chingaso, Havoc, and Seven Seas – Oh No sees hearts breaking, pasts haunting, immediate futures inducing cringes, self-anesthetization occurring frequently, and Mr. Death in all of his myriad guises dropping in occasionally just to check up on things. The musicianship has only gotten stronger, no little thanks to artistic evolution and expert co-producers Richardson and Robinson. “War on the West Side,” which originally came out on Seven Seas (2005) and is arguably the band’s signature tune, gets updated on Oh No. The result isn’t any less fist-pumping, just a little different.

Vocalist Kerry Dean’s voice still has its tastefully piercing, Offspring-y bite but is muted and echoes itself. His guitar also is way crunchier, deferring to Black Sabbath over anything non-stoner-rockish, punkish, or thrashy. With Oh No’s version of “War on the West Side,” the band clearly has found a way to convey anthemic rock and reggae, as Dean’s guitar and Eric Dodson’s stickwork rhythmically pound in stereo beneath bassist Steve Steward’s bluesy Flea-ish runs. True to the vatos’ blue-collar ethos – and respect for their forebears’ anti-establishment hearts – the song is bitter, its angst aimed specifically Fort Worth’s moneyed Westsiders, though the sentiment, naturally, applies to blue-bloods everywhere: “Privilege and nepotism / Ever widening the schism / Between have and have-nots / We’re gonna burn your fucking tower down!”

In addition to punk proclivities, Darth Vato has always had a, um, soft spot for heavy metal – Dodson is an avowed hair-metalhead and typically performs in his favorite vintage Poison concert T, and Steward broadcasts his love for Sabbath and other ancient stoner-rockers everywhere, including on “D’reetos” (or “Doritos”), in which he writes “Drop the needle / Paranoid side two / You’ll load the bong better / With a ‘Hand of Doom'” (Sabbath’s nigh laughable anti-heroin song, no less).

Though definitive, “War on the West Side” isn’t Oh No’s only ska-reggae-punk-metal homerun. “Had Your Chance” is a dirge, all stomping beats and barre chords, with a huge hook, while “In With The Brew” has a hair-metallic intro that would make Iron Maiden cramp up, and “Dealbreaker” goes from Slayer to King Tubby and back pretty seamlessly. Mostly written by either Dean or Steward or all three, all of the tracks here also prove to be more than valentines to Bacchus.

They’re also pointed reflections of working-class life, their mission statements manifest equally in the decidedly gritty music and the lyrics. The relationship number “In With The Brew” plays on that old adage – and fallback plan – near and dear to a lot of us: “‘Cause it’s out with the old / In with the brew / Tried to do it right / What’s that mean to you?” Outside of the boudoir, a hard rain’s a-gonna fall, thus spaketh “Dealbreaker,” a plea for common sense in stupid times: “The curse of our humanity/ Is the reality that we create / People judging other people / Like God’s own magistrate.”

The humor – and there’s lots of it here – is smart rather than cheap and more amusing than what most admittedly sybaritic outfits can crap out. On the rapid-fire jaunt “(Oh, Great, It’s a Bunch of) Amateurs,” the hilarious lyrics are basically spit out in one long breath: “Watch me, I can walk a line, don’t take my keys, I can drive just fine, I’m only going to the liquor store, I’ve driven drunk a million times before.” “D’reetos” is perhaps the cheekiest Oh No tune, with the coy pop-cult references coming on strong and going down easy, i.e.: “You coulda got baked / With the girl next door / A hippie named Craig / And his ferret named Thor / But they listen to Phish / And you harbor no wish / To choke on incense tonight.”

There also are doses of some serious orchestral maneuvers. The gorgeous instrumental “Madness” (alluding to the legendary ska band, perchance?) floats a muted trumpet through the back entrance of that proverbial jazz club in the sky, and Dick-Dale surf riffage rat-a-tat-tats in choice places.

To help round out the DV sound, the trio recently added a rhythm guitarist, former Voigt ax-man Joshua Loewen, who is geeked to accompany the band on a forthcoming tour, traveling by van, Steward’s liner The S.S. Erin Gray. The 25th century for ska-punk-metal is now.

Editor’s note: Loewen and Steward write for the Weekly on a freelance basis.