Last Saturday night at Bass Performance Hall, during the final scene of Fort Worth Opera’s production of Of Mice and Men, I got a little misty-eyed. 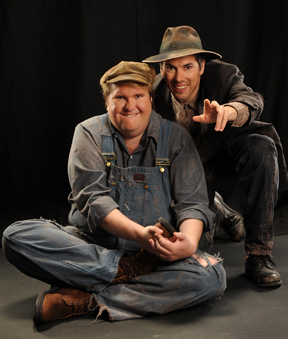 I wasn’t sure why. Up until then, FWO’s take on composer Carlisle Floyd’s adaptation of the literary classic had me feeling Dust-Bowl empty. The two main characters – the plainspoken, noble George Milton (Phillip Addis) and his charge, the man-child Lennie Small (Anthony Dean Griffey) – seemed to have developed only modest chemistry as migrant farm workers in Depression-era California. Floyd’s score struck me as elusive, and his libretto appeared to skimp on subtleties, preferring instead to deal in archetypes and allegory. Yet by the time the ending came around, I was choking back tears.

I kind of understand why now. Like everyone else on earth, I was assigned to read John Steinbeck’s slim 1937 novel in high school (and actually did, to my – and my English teachers’ – gaping amazement). The universality of his picaresque character-drama intrinsically appealed to me, testosterone-addled, prone to daydreaming, and consumed by anti-establishment thought as I was. George represented unwavering courage and hope, and Lennie was the wild, untapped power of the common man. The hateful boss with whom George and Lennie find work, Curley, was The Man, and his new, nameless Charybdis of a bride manifested the perils of hedonism, with the other ranch hands serving as a Greek chorus of sorts. I also bought into the underlying theme of the struggle that, while private, just as often plays out publicly: the need to carve out your place in the world while taking care not to vandalize the firmament into which you are carving.

But the end of the book didn’t set off any waterworks, though I grasped its resonance and wished things had turned out differently for virtuous George and his dim but lovable pal. I cried at the end of FWO’s Of Mice and Men because Floyd evidently had managed to expertly condense a few hundred pages’ worth of slowly accumulating emotional heft into barely two hours. I guess all of that heavy melodrama in one sitting was just too much for my puny heartstrings.

The curtain rose on a set that was simple and surprisingly transporting. In the upper-right-hand corner of a milky midnight backdrop, a foggy, gibbous moon shone down on a clearing in the woods: a sparse arrangement of some rocks and a tree, a farm fence atop a rolling hill on semi-concealed scaffolding, and bare, tawny stage. A police siren wailed, sending out George and Lennie, scuttling and looking for a place to hide. Once again, the confused hulk had gotten his hands on something soft, something that he could “stroke” and “pet” – a young girl’s dress, in this case – and wouldn’t let go. The heat eventually dissipated. George, as you could tell he’d done many times before, considered his options, standing upright and singing, “My life would be so simple by myself.” “Just give me the word,” Lennie sang in reply, no doubt upholding his recurring part in their ritual, “and I’ll strike out alone.” But George reminded Lennie, “I promised your aunt I’d look after you.”

Plus, the men needed each other. Lennie, without supervision, was incapable of anything resembling a normal life, and George simply wanted something – or somebody – to call his own, as all of the characters in both the opera and book do, a natural byproduct of the have-not times. Most of the opera took place in a bunkhouse, ostensibly part of Curley’s ranch and the place to which George and Lennie arrived unforgivably late for work. Inside, the action bounced all around, from Curley (Matt Morgan) and his “tart” (Brandi Icard), to the other ranch hands, led by the pathetic old Candy (the booming Stephen West) and Slim (Steven Mumbert), and to George and Lennie and everyone else in between. The pacing was rat-a-tat-tat and the interaction among the ensemble pretty fluid.

Richard Kagey’s direction overall, though, could have been better. Ranch hand Carlson (Adam Sattley) and the ballad singer (Scott Scully) were nearly identical in appearance and should have been separated more effectively. At one point, almost as soon as one of them left the bunkhouse to put Candy’s beloved dog (an adorable mutt) out of its misery, the other walked in, wondering why everyone looked so glum. (“You just went out and shot Candy’s damn dog!” I wanted to yell.) And during the electric final scene, as George was pointing a pistol at the back of daydreaming Lennie’s head and shaking from grief, and with the sound of Curley’s mob growing louder in the distance, a gunshot sounded – right as Addis threw his gun down (to convey George’s disgust), leading me to wonder falsely whether one of the men in Curley’s lynch-mob had shot George in the back.

As the main characters, Addis and Griffey, too, would have been more elegantly served by less stilted stage direction. There were moments when the characters should have been consoling each other physically but didn’t, plainly out of fear of distracting each other from the physical chore of singing opera. A less conventional approach to blocking might have helped give their relationship the kind of visceral impact that such a visceral saga demands. Griffey was everything he’s cracked up to be. The recent star of the Metropolitan Opera’s Peter Grimes, the fortysomething American tenor is considered the definitive Lennie. His performance here was beyond measure: twirling his hands excitedly, collecting his breath nervously before speaking, grinning giddily, looking small, looking larger than life, and filling Bass Hall with unadulterated vocalismo. His readings were almost consistently honest to his character’s mercurial moods.

High honors also go to Addis. A thin, young, dark-complexioned man with an angular face, the young Canadian baritone had an uber-masculine, authoritative voice, though his proclivity for delivering nearly every line straightforwardly sometimes contradicted George’s roller-coastering frustrations. As Candy, veteran bass West was an incredibly charismatic presence, even when shuffling around the bunkhouse mute after his dog had been shot, and even as he faced the audience, dipped his chin, and declaimed Candy’s nonexistence and, by proxy, the nonexistence of ranch hands everywhere. Morgan played Curley as a ’30s frat boy overwhelmed by power he couldn’t understand, and, as Curley’s wife, soprano Icard nailed every high note and did a lot of coloratura but seemed to sing around the lyrics rather than inhabit them.

Leading the Fort Worth Symphony in the pit, conductor Joe Illick did his best with Floyd’s unobtrusive, workmanlike score, originally written in 1970 and finalized about five years later. Quietly, and quite unexpectedly, Floyd’s Of Mice and Men has become part of the American repertoire. After debuting in Seattle, the opera was put on in Houston, Washington, and several other major houses before lying dormant for years: Its value has only recently been rediscovered, not as spellbinding opera but as an inexpensive undertaking with name recognition, serviceable and non-elitist music, and a concise, swell yarn.

The last musical word on Of Mice and Men is Aaron Copland’s neo-Romantic score that accompanied the novel’s 1940 film treatment. At Bass Hall last weekend, I wished for more ringing, Copland-esque open sevenths, bold notes as wide as the Californian plains and as big as George’s and Lennie’s hearts. I also intended to walk out of the theater dry-eyed. But such are the best-laid plans of … oh, you know. -Anthony Mariani