Home Music Music Feature Spacey
SHARE
Facebook
Twitter
Most musicians go through little rituals when songwriting, and most of them can’t explain the madness to their methods. 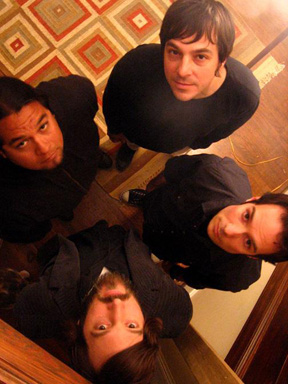 Ditto for Chris Plavidal, the 35-year-old frontman for the Fort Worth-Denton art-rock garage outfit Stumptone. For whatever reason, Plavidal must have white noise on when he’s penning tunes – short-wave radio, static, an iPod loaded with sounds of the city or nature, you name it. “That ambient element always has to be there,” he said. “I can’t say that it always affects the final song, but it always factors into the process.”

Stumptone fans won’t be surprised to hear this. The band recently cut Gravity Suddenly Released, its sophomore effort, on Denton’s Works Progress label. Like the band’s eponymous debut album from 1998, Gravity merges all kinds of dichotomies: slick with a serrated edge, punk fire doused with cool jazziness, the ghostly echoes of sampled voices and mysterious noises rolling through an atmosphere of reverb-riddled dive-club speakers. Listening to it all, you can imagine Plavidal, armed with only his acoustic guitar, struggling to fight off sonic alien invasions and find some creative harmony.

Several thousand North Texas bands have come and gone between Stumptone’s two albums. Plavidal and company’s long hiatus can be chalked up to the usual roadblocks: demanding day jobs, family responsibilities (including twins for Plavidal and his wife), a penchant for perfectionism, and the arduous process of shopping a product around to national indie labels. But his band never went away, Plavidal said. They just expanded in size, took little breaks between live gigs and recording sessions, and grew more determined “to deliver the ideas behind our sound in a more refined way.”

Plavidal was born in New Orleans and raised in Houston. He started taking trumpet lessons in grade school. Music would always be a powerful part of his life, he knew, but early on, he got the idea that he would never make a living at it. “I had music teachers who were brilliant, who could play anything,” he said. “If they’d wanted to, they could’ve been symphony maestros. And I would think, ‘Why are they giving this fifth-grader private lessons in Houston?’ “

He would later come to appreciate the solid creative foundation that his generous tutors had provided. For one thing, they shaped Plavidal’s philosophy of musical appreciation without artificial borders. “I’ve always liked [particular] music because it was good music, original music, not because it fit a label,” he said. When he was a teenager, some combination of Prince, The Dead Kennedys, and The Flaming Lips prompted him to learn guitar.

Plavidal moved to Fort Worth to attend Texas Christian University, where he earned a bachelor’s degree in English with a minor in photography, intending to go into commercial art (which he has). He formed a band and occasionally played clubs around town. His musical instincts didn’t really start to spark, however, until he moved to Denton in 1996 and started at the University of North Texas, with an eye toward a graduate degree in Native American studies. “There was so much music going on under the surface, it was unbelievable,” he said. Drummer Mike Throneberry drew Plavidal in and introduced the youngster to myriad local instrumentalists, songwriters, and singers. Plavidal and Throneberry began to play as a two-piece with a revolving series of guest collaborators.

That Native American studies degree never materialized, but a strong and continuing tie to the Denton scene was forged. Plavidal and Throneberry recorded Stumptone’s first CD in fits and starts, using a four-track recorder and a cast of local contributors. Plavidal also took a year-long “adventure” visit to New York City, where he made two important discoveries: “New York is a great city, an inspiring city” and “New York is a horrible place to be when you’re broke.”

Compared to Gravity Suddenly Released, the band’s first album is rougher, louder, looser – and never professionally mastered. Still, it earned raves from local scribes for the way Plavidal merged pop sensibilities with ear-splitting excess. He said, “We’ve always thought loud volume provides a special kind of catharsis.” Stumptone began to accumulate regular members, mainly for help with rounding out the band’s sound in a live setting. Pete Salisbury joined as bassist/guitarist/vocalist, and Frank Cervantes came along as a third guitarist. Everybody had outside musical projects – Cervantes also played with sub oslo, Salisbury gigged with The Baptist Generals and Mandarin, and Throneberry with The Marked Men.

But they managed to convene in the spring of 2005 in Argyle at engineer/producer Dave Willingham’s Echo Lab, where they began laying down tracks that would eventually evolve into Gravity. Willingham and the band co-produced the album at The Echo Lab, the legendary Denton studio co-owned by Willingham and Matt Pence, the drummer for Centro-matic and an independent producer.  All of the basic tracks for Gravity Suddenly Released had been laid down by January 2006 but weren’t mastered until some time later. He and his bandmates love to tweak, Plavidal said, especially where their signature usages of ambient noise samples are concerned. Even as Plavidal, Throneberry, and company were shopping the album around to various national indie labels, they continued refining. Eventually, Willingham and a couple of friends decided to revive a label of Willingham’s that had gone dormant – Works Progress – and release the thing themselves. Gravity Suddenly Released came out as both a CD and a vinyl LP packaged together.

“We’re all vinyl freaks, and we collect records,” Plavidal said. “We decided it would be a more complete physical piece of art – something you could hold in your hands and appreciate – if we issued vinyl LP versions, too.” With the new album out there and an upcoming slew of area shows scheduled, Plavidal wants fans to know one thing: There will not be another 10-year wait for Stumptone’s third CD. In fact, they’re planning to reconvene at Argyle later this year to begin recording. The Stumptone fellows want to expand their audience across as many state, national, and international lines as possible, but in the grand scheme, Plavidal said, he feels like he’s living the life he always wanted.

“We’re very happy with what we’re doing,” he said. “We just want to keep doing it. I consider all these guys my best friends.” No one’s opposed to commercial success – whatever form that might take – but “none of us are in a position now to suddenly stop and do a big tour. It feels great just to concentrate on making music.”