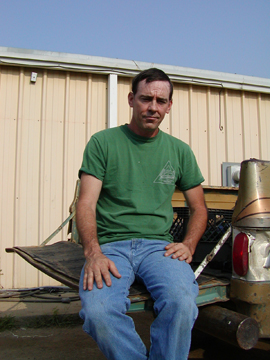 Unfortunately for him and the other residents and business owners on and around East 1st Street, the presence of hazardous waste on the roads has become an all-too-familiar sight. So too has the smell of noxious fumes that hang over the Eastside neighborhood like an acrid cloud on some days.

But Cole’s bad memories go deeper than just the variety of environmental hazards that he and his family have had to endure as a result of living and working next to Five Star Custom Foods, a meat- and food-processing plant. He has also had to deal with a seemingly never-ending procession of legal battles; threats to him, his family, and his pets; police raids; jail time; and what he calls constant harassment from the company. So when he saw the grease on the road, he assumed Five Star was up to its old tricks, illegally dumping its waste into the sewers.

“There was hazardous waste for two blocks; it wasn’t only an environmental hazard, but it was a hazard to anyone driving by because it was so slick, ” said the 50-year-old father of three, talking in his cluttered shop with airplane models hanging from the rafters.  The food plant, under a variety of owners, has had a long and troublesome history of polluting the air and sewers. Throughout the 1980s the city issued dozens of violation notices to the plant, owned then by a company named Standard Meat, for dumping oil and grease from animal carcasses into the sewer systems.

In the 1990s, the state took action against the company, levying a $6,000 fine after neighbors complained about the stench. A Fort Worth Weekly investigation (“Powerless = Polluted,” Sept. 12, 2002) found that the most recent owners of the plant, Bobby Cox Companies in Fort Worth, carried on the tradition of illegal dumping and air pollution. The Texas Commission on Environmental Quality has levied multiple fines and doled out numerous citations over the years, but none since 2004. The federal Environmental Protection Agency hasn’t investigated the plant in four years but did give the company a violation notice last November for failure to file ammonia in its toxic-release inventory report, used to inform nearby residents of the type of chemicals the company has on its premises.

The city couldn’t find any record of a hazardous-materials team being deployed to that area until the Weekly provided a photograph taken by Cole. The picture shows the team in front of the East 1st Street building, watching a Five Star employee cleaning up grease.  According to Kent Worley, public information officer for the Fort Worth Fire Department, the crew responded to a report of a truck that had spilled grease in the road, and when they arrived, they found that Five Star employees were already cleaning the mess. Their records show that the team was there only about half an hour and took no action regarding the spill.

Mary Gugliuzza, public education coordinator for the Fort Worth Water Department, said that the company hasn’t had any violations for three years and that the sewer lines in that area are inspected twice a year.  But several of Five Star’s neighbors said that they still routinely smell foul, acrid odors coming from Five Star’s plant. Norma Gonzales, who lives across the street from them, said that she and her family notice the stench at least once a month.  “I see smoke over there all the time,” she said. “Sometimes it smells really bad.”

Five Star officials did not return phone calls to the Weekly. The company has made numerous attempts to clean up, as did previous owners. Five Star, for instance, has spent more than $500,000 in the last eight years in an effort to bring its plant into line with regional environmental standards, according to their records. However, Cole and other residents say the company’s attempts have been merely stopgap solutions and that each time, after the public spotlight is turned off, the smell of burning hydrogen sulfide and animal waste in the sewers comes creeping back. The smell “will die down for a few months, but it comes back every time,” he said.

He believes that the reason that Five Star hasn’t had any violations lately with any of the four agencies that monitor it (TCEQ, the Texas Department of Health, and Fort Worth’s water and environmental management departments) is that no one will make complaints against the company after seeing what happened to him.  Cole’s odyssey of dealing with his noxious neighbor started when the toilet and drains in his shop backed up in 2002. The smell, he said, was like rotten eggs, so unbearable that he had to close his business for a time. As a result of his complaint, inspectors found potentially lethal levels of hydrogen sulfide being created by bacteria in Five Star’s grease pit.

For his whistle-blowing efforts (and for being the only person whose picture and name appeared with the Weekly’s story) he says, Five Star has been trying to silence him ever since.  In 2002, when Cole showed a manager at Five Star a petition with 250 signatures asking the company to clean up, he said the manager threatened to turn him and his three dogs into sausage if he ever “screwed” with them again. Several days later, one of Cole’s dogs disappeared, leaving a swath of fur on the fence between his property and Five Star’s, he said.

Then there was the water main on Five Star’s property that spewed high-pressure water into his backyard continuously for four days, stripping the paint off several of the automobiles that Cole keeps there. He said it took multiple phone calls to the police and the water department to get anything done about it. Eventually, the police came and turned the main off. Cole never sought damages from the incident, he said, because of the legal problems he was facing due to allegations brought against him by Five Star.

Ten days after presenting his neighbors with the petition, he was arrested and accused of tampering with a tank of anhydrous ammonia, a chemical used as a commercial coolant and also to make methamphetamines. A Five Star employee identified Cole from his picture in the Weekly and said he had seen him on a security monitor. Cole spent six nights in jail and said the police told his wife, Sonia, that they had no record of his arrest – though she had seen him being taken away in handcuffs. Eventually, he was released on a $30,000 bond and told to stay within city limits.

Unable to return to his home in the town of Blum, south of Cleburne, he moved his wife and three teenage kids into his shop, despite the fact that an EPA agent told them that prolonged exposure to the tainted air was very dangerous.
“We couldn’t go back to our life,” said Cole. “Could you imagine having to raise high school-aged kids in this kind of an environment?” Four years and $10,000 in legal fees and bail money later, the case against him was dropped. He said he was summoned to court more than a dozen times in five years. Prosecutors presented several plea bargains to Cole, offering him a chance to stay out of jail in exchange for a guilty plea. He refused every time.

Six years after his original complaint to the city, Cole is still playing David to Five Star’s Goliath. And despite all that he has been through, he still relishes the role. “I’m going to stand my ground,” he said.