Back in the summer of 1984, Beverly Hills Cop and Ghostbusters ruled the box offices as big-ticket action thrillers headlined by comedians. 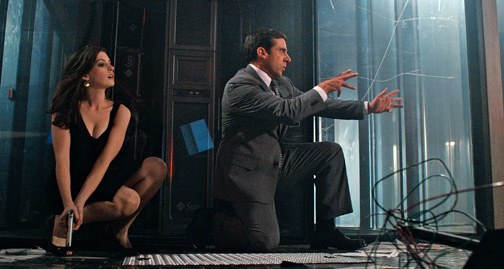 Hollywood has been trying to recapture the formula ever since. It’s easy to see why – movies that give you an adrenaline rush and tickle your funny bone equally well are entertaining like few other things in this world. Yet for each one that succeeds (see: Hot Fuzz), many more of them fail (don’t see: Witless Protection), often because filmmakers think they can just stick a gun in a comic’s hand and expect hijinks to ensue. The direction behind the camera is as important as the comedic talent in front, and most action filmmakers can’t loosen up enough to be funny, while most comedy directors don’t have the chops to do convincing action.

The agreeably clunky movie version of Get Smart, based on the spoofy 1960s TV sitcom, is helmed by Peter Segal, the veteran of three previous Adam Sandler comedies and the third Naked Gun film. He seizes on the opportunities provided by the big screen, filling the movie with explosions, gunfights, sequences with stuntpeople hanging out of cars and airplanes, and all manner of other stuff that the TV show could never have accomplished. This is the right idea. The more a movie like this looks and feels like a real Hollywood action thriller, the funnier it is. (It’s paradoxical yet true.) Segal’s no Michael Mann in terms of editing – the movie would be truly awesome if he were – but he’s as good with his execution as many lifelong action directors, and his zeal for the job is ingratiating.

An even bigger trump card for the movie is Steve Carell, who is tailor-made to portray the blundering secret agent Maxwell Smart. Carell has the same blinkered squareness as the role’s originator, the late Don Adams, but he also has a soft charisma that Adams didn’t possess. Whereas the show’s Smart was more of a straightforward buffoon, the character in the movie starts out as a frustrated desk jockey who submits ridiculously detailed analysis reports of spy chatter. (“Bear with me, gentlemen. The next 100 pages might be somewhat dry.”) He shortly becomes a knowledgeable and resourceful – though highly accident-prone – field agent for the shadowy national security bureau called Control. The star plays the part with an air of studied pompousness that’s repeatedly punctured when Smart gets caught in an elevator or shoots himself with a miniature crossbow. Many of the movie’s laughs come from Carell’s tiny changes of expression as he quietly absorbs the latest, usually self-inflicted affront to his dignity. This layered version of Maxwell Smart is a nifty comic creation, and Carell’s understatement carries it off beautifully.

Smart finally snags the promotion he craves after most of Control’s agents are compromised by a mole and liquidated. The Chief (Alan Arkin) pairs him up with the disdainful and far more experienced Agent 99 (Anne Hathaway) to take down Siegfried (Terence Stamp), the head of a supervillainous organization called KAOS that’s planning a nuclear attack on L.A. It’s up to Control to thwart Siegfried, because all the other government officials (including a Bush-like U.S. president played by James Caan) are even more incompetent than Maxwell Smart – there’s a sign of the times for you.

Curiously, the movie tends to fall flat during its big comic set pieces such as Smart teaming with a hefty woman to upstage 99 and a low-level baddie on the dance floor at a party. Much better stuff comes from the throwaway jokes, like the kid trying to get his mom’s attention while the climactic car chase whizzes by. The entrance to Control’s safe room, located in the middle of a duck pond, is a gag worthy of the show, as is Smart’s absurd yet rigorously logical exchange with Siegfried over whether Smart is a Control agent. The fight sequence on top of a car involving Smart and Agent 23 (Dwayne “The Rock” Johnson) is creatively resolved, and the deflation of Smart’s final triumph is too good a joke to give away. Suffice it to say we wouldn’t see Jason Bourne engaging in these shenanigans – Matt Damon, maybe; Bourne, no.

The abundantly strewn comedic bits carry the film over some minor but distinct rough patches in its final third when the spy plotlines pile up. Those hitches make the whole thing less fluid than the first Austin Powers movie, but they don’t keep it from being the first decent spy spoof since that film came out 11 years ago. Get Smart shares the same ’60s playful free spirit, and in Carell’s Smart, it has a character for our time that’s sturdy enough to hold down a sequel. All that’s pretty groovy, baby.