Local writer and retired journalist Phil Vinson has published his first work of fiction – and it’s a good one, although I suspect it is not altogether fictional. 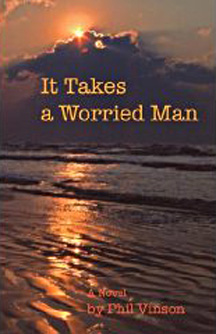 I doubt that anyone can write as compassionately and insightfully as Vinson does about the private hell of what the psychiatrists now call “major depressive disorder” without having first suffered through it or seen it in someone very close.

It Takes a Worried Man was a painful but ultimately satisfying read for this reviewer who, like the protagonist Greg Spencer, spent too many years in that lonely black hole before climbing out into the sun again. The title, of course, is from the traditional folk song, “Worried Man Blues,” and the refrain “I’m worried now, but I won’t be worried long” is the message for people who wake up each morning with the “shackles” of clinical depression’s worst manifestations: irrational fears, anxiety, paranoia, panic, feelings of worthlessness, thoughts of suicide, and frequent freefalls into catatonia. You can and will get well, Vinson tells us through Spencer’s story – if you don’t kill yourself first.

Fortunately for those suffering its pain today, the understanding and treatment of this disease are light-years away from the days when the 19-year-old Spencer first sinks into a “jangled melancholy” he can’t understand much less articulate to his frustrated parents. All he can tell them is that he doesn’t “feel right.” For months, he simply doesn’t want to get out of bed. “Why bother? …What’s the use? I’ll never feel normal again,” he says to himself each morning as he wakes up to a world where he feels he no longer belongs or even wants to be a part of. “All you need is a little backbone” is his mother’s advice. His father simply avoids him. Where has Spencer’s “zest for life” gone?

The time is 1959. The setting is Fort Worth, where Vinson’s autobiographical Ink in the Blood, published three years ago, chronicled a young boy’s coming of age in the working-class neighborhood of Polytechnic Heights in the 1950s. Ink ended with Vinson on the cusp of a career in journalism. His new fictional tome begins with a young man in his first year of college journalism – and on the cusp of flunking out. Spencer’s slide into darkness starts with a car wreck that leaves him with a concussion and broken ribs and a sadness he can’t shake. The journey that leads to recovery is a scary one indeed – not as bad as the 1948 novel The Snake Pit by Mary Jane Ward, about the horrors of an insane asylum – but it is equally disturbing in its depiction of the failed experimental treatments of the time and the careless over-preDELETEion of drugs that were more dangerous than the disease they were designed to help.

We spend six, angst-driven years with Greg Spencer as he goes from one drug therapy to the next: first Miltown, a popular tranquilizer during the ’50s and ’60s that was later found to be a highly addictive barbiturate and is seldom prescribed today, through Valium, which he eats like candy, and, as many depressed folks do, self-medication through alcohol. No doctor ever tells him that the prescribed drugs are addictive, so of course he becomes addicted, exacerbating his depression. He also tries a “Freudian shrink” and finds the sessions probing his past (“When you built that snowman [at age five] how did you feel?”) silly and pointless. We become caught up in the highs and lows of his career as he finally gets his journalism degree, finds work at a succession of Texas newspapers, breaks a major story about corruption in high places in Galveston, and has a passionate love affair that ends badly, all the while trying to cope with the 9,000-pound elephant on his back.

Vinson brings to the written page a highly perceptive observer’s understanding of a disease that today afflicts more than 40 million American adults, according to the National Institute of Mental Health, and one that is too often dismissed, even in this enlightened time, by family and friends with a “snap out of it” attitude. But as one doctor wrote, the clinically depressed patient can no more overcome his condition with will power than the diabetic can will his pancreas to produce insulin. Now, with wit and clarity and good writing and storytelling skills, Vinson has added to the growing body of knowledge of a disease that has burdened humans at least as long as we have had the ability to chronicle our history. But his is also a cautionary tale. The decades of the ’50s and ’60s, with their misuse of preDELETEion addictive drugs to treat depression, were not that long ago. Vinson’s novel reminds us of just how close we still are to some very dark ages in our treatment of mental illness.

You can reach Betty Brink at betty.brink@fwweekly.com