Cinematic inventors and pioneers were trying to make their medium three-dimensional as far back as the 1890s, but it wasn’t until 1952 that Hollywood embraced 3-D filmmaking as one of several technical innovations that would beat back that newfangled menace to the film industry’s profits called television. 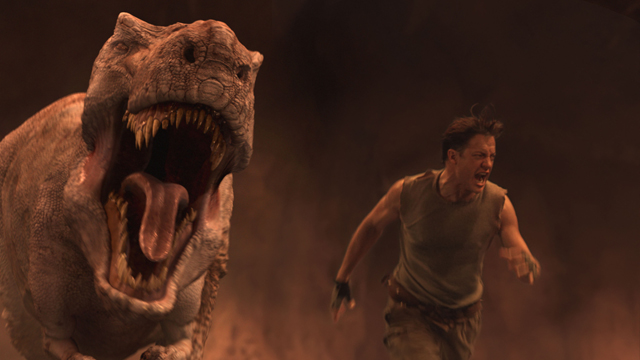 The process was used mostly on horror and science-fiction flicks, though a few more “respectable” efforts like the musical Kiss Me, Kate and Hitchcock’s Dial M for Murder were shot in 3-D as well. Since that fad ebbed away, 3-D has been treated as a curiosity rather than a potential means of creative expression. The advent of home video meant that 3-D effects got lost on the small screen, so there was even less incentive for filmmakers to pursue it. Often 3-D has been a way of gussying up the third installment of a tired series (Friday the 13th, Jaws, Spy Kids). Robert Rodriguez has shown interest in the medium, but has made terribly poor use of it (The Adventures of Shark Boy and Lava Girl in 3-D). The recent Hannah Montana concert film was shown in 3-D, but it’s probably safe to say that Miley Cyrus fans would have flocked to the thing in any format.

All this history is a prelude to me offering up this heavily qualified bit of praise: Journey to the Center of the Earth has the best 3-D special effects I’ve ever seen. The opening shot of the alien cockroach scuttling into view and turning its antennae toward the screen will make you jump out of your seat. There are a few other moments that have a similar power, but sadly, this movie follows most other films of its kind in that the 3-D effects upstage the story. Speaking of which, this film is very loosely based on Jules Verne’s novel. (Apparently, the film was originally planned as a straight-up Verne adaptation in a flat format, but the suits wanted a movie more like a theme park ride.) It takes place in the present day, and its characters have all read Verne’s book, including Trevor Anderson (Brendan Fraser), a vulcanologist whose unorthodox research is about to fall victim to budget cuts at the university where he works. On a weekend when he’s stuck taking care of his nephew Sean (Josh Hutcherson), Trevor discovers some notes left by his long-missing brother – also the kid’s father — that point to a world hidden under the earth’s surface. Quicker than you can say, “Axel Lidenbrock,” uncle and nephew are jetting off to Iceland to descend into a volcano and find this world.

First-time director Eric Brevig comes to this project as the visual effects supervisor on such films as Men in Black, Pearl Harbor, and Signs. His expertise (plus the three-dimensionality) comes in handy when the sailing adventurers are attacked by piranha-like fish leaping out of the water. There’s one genuinely hair-raising sequence when Sean tries to cross a chasm on floating magnetized slabs of rock. The action isn’t terrible, but Brevig has a tin ear when it comes to anything besides that. He consistently mishandles the tone when Trevor and Sean attempt to find the missing brother, and the resolution of this subplot reaches for way more pathos than this wispy film can bear. The world inside the earth has dinosaurs, luminescent butterflies, and a subterranean ocean, but it never achieves any sort of beauty. Also, there’s a third adventurer on Trevor and Sean’s descent to the earth’s core, a deceased scientist’s hot daughter (portrayed by Icelandic newcomer Anita Briem), and neither the character nor the actress adds much to the proceedings.

This year Brendan Fraser turns 40 and, with this movie and a third Mummy installment coming out this year, this is as good a time as any to ask: What is he doing? In addition to serving as a credible action star in the Mummy series, he has also headlined a great many cartoon-like comedies (from Encino Man in 1992 to Looney Tunes: Back in Action in 2003) that showcase his prodigious gift for physical comedy and a beguiling willingness to play the stooge. The trouble is, he hasn’t shown much ability to pick high-quality projects, either as an action hero or as a comedian. By contrast, the shiniest spots on his resumé are his infrequent turns as a dramatic actor (Gods and Monsters, The Quiet American). Dare we suggest that he do a bit more of that in the future?

As for Journey to the Center of the Earth, this film is too bland and forgettable to gain much traction, especially coming out in the same week as Guillermo Del Toro’s Hellboy II (which, sadly, I didn’t get to see by press time). Filmmakers have turned to Jules Verne for inspiration since 1902. It’s unlikely that this movie will be remembered 106 years from now.

Journey to the Center of the Earth
Starring Brendan Fraser and Josh Hutcherson. Directed by Eric Brevig. Written by Michael Weiss, Jennifer Flackett, and Mark Levin, based on Jules Verne’s novel. Rated PG.