Is it true? Did Talladega Nights really come out only two summers ago? It seems like ages, mainly because Will Ferrell has starred in so many other movies since then. 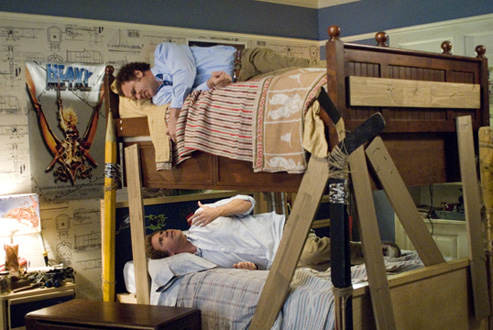 First came the atypical Stranger Than Fiction (November 2006), then two consecutive sports comedies, Blades of Glory (March 2007) and Semi-Pro (March 2008). Yet even though he’s been prolific and none of these movies was downright bad, Ferrell’s star has dimmed. No wonder his films aren’t events any more, when people know with each new release that he’ll have something else in the theaters in six months. Either he needs to learn the value of scarcity or do something radically different, like portray Dr. Watson opposite Sacha Baron Cohen’s Sherlock Holmes, which he indeed is going to do, according to a recent announcement. I have no idea how that might work, but it could be fantastic.

In the meantime, there’s Step Brothers, the fifth film he has headlined in the last two years. Even though it reunites him with his Talladega Nights director Adam McKay and co-star John C. Reilly, it’s still some distance below his usual standard of work. He plays Brennan, a 40-year-old frustrated singer who lives at home with his mother Nancy (Mary Steenburgen). Reilly plays Dale, a 39-year-old aspiring drummer who lives at home with his dad Robert (Richard Jenkins). When Nancy and Robert meet and marry each other in a whirlwind courtship, their adult sons wind up having to share a house and a bedroom. Acting like overgrown nine-year-olds – not that there’s any indication that they’re capable of behaving otherwise – the boys treat each other as mortal enemies from the time Brennan moves in until an exasperated Robert demands that they find jobs and move out.

Unlike previous Ferrell efforts, this one is rated R, and the filmmakers take full advantage of the rating to indulge in all manner of gross humor. When Dale lays down an ultimatum that Brennan stay away from his drum set, Brennan doesn’t just threaten to place his testicles on said drums. No, he makes good on his threat in full view of the camera. (I can only hope what I saw was a prosthetic.) I have to admit that I laughed at the sheer, uh, ballsiness of that scene, but elsewhere the comic invention is lacking. Too many scenes come up dry, like the montage of Brennan and Dale destroying stuff in their parents’ garage or the montage of the two of them botching job interviews together while wearing tuxedos. One of those interviews (with Seth Rogen portraying the interviewer, no less) even concludes with a fart joke. I expect that from the hacks who make dire stuff like Meet the Spartans, but surely these filmmakers could have come up with something cleverer.

Rogen’s presence reminds us that this movie is yet another Judd Apatow production – Apatow was involved with Ferrell’s comedies well before he started making comedy films in his own right. Unfortunately, Step Brothers looks quite passé next to Apatow’s Knocked Up or Greg Mottola’s Superbad. The male arrested-development cases in those films were subjected to scrutiny worthy of a Philip Roth novel. Whatever you thought of those movies, you probably came away thinking that you knew or maybe even used to be somebody like them. Brennan and Dale, on the other hand, are too grotesque and socially retarded to relate to, and they’re not helped by the story’s unrealistic turns. When Ferrell and McKay run out of comic ideas, they wave a magic wand and – presto! – Brennan and Dale become best friends. Or they suddenly buckle down and get real jobs. The movie alternates between spending too long running in the same circles and then suddenly shifting its premise around.

Another thing that’s missing here is the sense of ensemble that livened Anchorman and Talladega Nights. Those films didn’t give all the funny business to the stars; they let whole galleries of supporting actors chip in with the laugh lines. Here it’s all about Ferrell and Reilly, with Steenburgen and Jenkins playing straight roles, and the insularity of their tiny circle becomes suffocating. What fresh air there is comes from two terrific supporting turns: Baby-faced Adam Scott makes a great smarmy bad guy as Brennan’s corporate-shark younger brother Derek, and brassy-voiced Kathryn Hahn tears the roof off as Derek’s miserable wife who sexually ravishes Dale in a men’s room.

It’s great to see these lesser-known actors cut loose on this kind of a platform, but they’re not enough to hold up the movie. Much like the main characters in Step Brothers, Ferrell and McKay look like they need to leave the house once in a while and meet some new friends. When they do, let’s hope that they don’t ruin things by farting too loudly.