The title of American Teen makes me suspicious. Just as it was with the excellent late-1990s TV miniseries American High, the word “American” in the title gives off the unwelcome impression that these documentaries are aiming to be a portrait of The Youth of Our Nation Today. 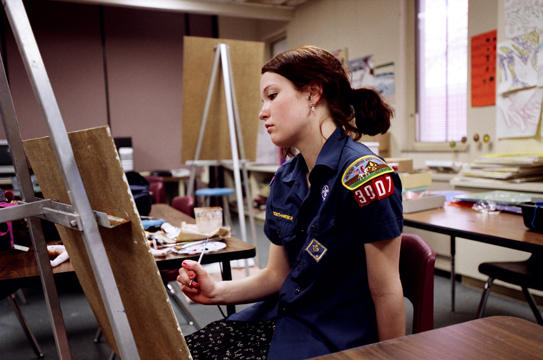 If that is indeed what the makers of American Teen were going for, they failed. Yet this movie has personable subjects (which is the most a film like this can really hope for), so it’s far from a total loss. Those subjects are five seniors in the class of 2006 in Warsaw, Ind., a town of about 12,000 people that’s described as “very white, very Christian, very conservative,” though we don’t see much Christianity and even less conservatism for some reason. The filmmakers miss the town’s biblical-themed botanical garden – how’d that happen?

Anyway, Jake Tusing is a band geek with severe acne, braces, and social skills so poorly developed that his idea of a conversational icebreaker is “I got my oil changed. That was pretty exciting.” On the opposite end of the popularity scale is Colin Clemens, a high-school basketball star in a state obsessed with the sport. His dad can’t afford to send Colin to college, so he pressures his son to win a scholarship by scoring lots of points. Naturally, this makes Colin allergic to passing the ball and thus a less effective player. One of Colin’s teammates, Mitch Reinholt, is also supposed to be a subject here, but he gets much less screen time than the other four and doesn’t really figure in the movie until more than halfway through.

The girls are characterized in much greater depth than the boys. Megan Krizmanich plays the role of mean, popular, rich girl to the hilt, acting pissy and passive-aggressive toward her best friend Jeff whenever he tries to date anyone. One girlfriend, Erica, e-mails Jeff a topless photo of herself (seldom a good idea), and Megan not only gets hold of the message and forwards it to the entire school but also crank-calls Erica’s house to harass her. (Erica is one of her friends, by the way.) The filmmakers do something regrettably cheap and withhold valuable information about Megan’s past until late in the film so as to make her retroactively sympathetic. It doesn’t quite compensate for what we’ve seen.

If you want a rooting interest, look no further than Hannah Bailey, a bubbly girl with a theatrical streak who plays in a rock band, wants to make movies, and can imagine no worse fate for herself than being stuck in Warsaw for the rest of her life. The irrepressible Hannah dominates the proceedings, but she crashes hard when her boyfriend Todd breaks up with her minutes after they’ve had sex. In contrast to the way Megan’s storyline is handled, the film tells us up front that Hannah has a family history of manic depression and is on medication. So it’s no joke when she misses 17 straight days of class and then sits crying in her dad’s car in front of the school, unable to get out and face her fellow students even under threat of losing a year’s worth of school credit.

No one who watches reality TV shows will be surprised at the easy way these kids relate to the camera. In the scenes and exchanges of dialogue that play out, these students exhibit the natural sense of timing that professional actors take years to successfully mimic. It raises the question of how much of what we’re seeing is staged, but there’s no denying its entertainment value – when Jake discovers his girlfriend has been cheating on him, he lays his face down on a table and then jokes about how he has made the table greasy. It’s terribly funny.

The same can’t be said for a handful of animated sequences that depict stuff like Colin’s dream of winning a championship and Hannah’s battles with her depression. Director Nanette Burstein used a similar strategy with her last documentary, The Kid Stays in the Picture, but there her subject was a man who didn’t want to appear on camera, so she needed to fill her movie out with fanciful visuals. Here the animation just jars with the live-action footage. There’s not much in the way of dramatic payoff, either, except arguably in Hannah’s case. We see Jake getting blasted with his older brother in San Diego, and nothing comes of it. Mitch winds up dating Hannah and seems like a totally nice guy, but then suddenly acts like a bastard when he breaks up with her.

The storytelling has too many gaps like these. Watch 1994’s Hoop Dreams, and you’ll see a truly epic documentary about high-school kids. Then again, American Teen is far from alone in losing a comparison with that film, and though it falls well short of greatness, it’s still a diverting little picture with a new school year getting under way.