Next time you feel a bout of road rage coming on, don’t just go bashing some driver’s car with a tire iron. Instead, head over to the Chef Point Café at the Conoco gas station/convenience store on Watauga Road in the town of the same name and let owner-chef Franson Nwaeze calm you down with some of his scrumptious fixin’s.

Here’s the backstory: Nwaeze and his wife Paula had always wanted to open a restaurant but didn’t have any ownership experience, which made getting a bank loan difficult. Financing a fuel stop was easier, and when they found one for sale – in 1983 – they bought it and turned half of it into the Chef Point Café. And though there are no tablecloths, Nwaeze’s place serves up variations on European and American standards that are so good they’d certainly improve the menus of most hoity restaurants. 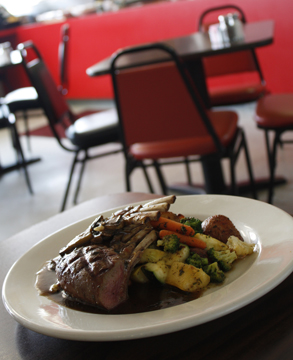 The stuffed mushrooms – listed under the menu section “Whatnots” – were heavenly. Loaded with cream cheese, Gruyère, and asiago and baked in rich garlic butter, the fungi amazingly held their own, which was impressive considering the powerful flavors of the cheeses.

On the American side of the appetizer equation, the boneless chicken wings were equally tasty. Dressed in Nwaeze’s own hot sauce and served with an excellent homemade ranch, they were hot enough to pique your interest but not so hot that you couldn’t taste the rest of the dinner. (Other apps include escargot, artichoke bottoms stuffed with crabmeat, and green-lipped mussels in a saffron sauce.)

Though I wouldn’t recommend it to anyone watching his or her weight, Chef Point’s mac ‘n’ cheese is probably the richest and tastiest in North Texas: penne pasta slathered in a sauce made from some sort of gourmet melting cheese, asiago, cheddar, and a touch of parmesan, and with just a bit of black pepper back-bite.

For an entrée, try the bowtie pasta dressed in a roasted red pepper sauce and served with two crabcakes that were good enough to stand alone. Plenty of crab and minced celery – not a lot of bread-crumb filler – they were moist on the inside, nicely fried on the outside, and tasty through and through. And combined with perfectly done, al dente farfalle under that thin but sinfully rich sauce with a touch of basil, well, the cakes were mouthwatering.

The rib-eye proved terrific as well. Accompanied by hearty roasted potatoes and a mélange of veggies, it arrived as ordered (charred outside, pink in the middle), and the seared fat – the rib-eye’s calling card so to speak – just melted in the mouth.
Our only quibble was with our to-go order. Though we ordered a 12-inch “Crowd Pleaser” pizza, what we got seemed to be a personal pie. Not only was it too small to please a crowd, it was too small to please several kids. The taste was never in question: non-sauced mozzarella and reggiano cheeses topped with fresh basil and drizzled in olive oil over perfect crust, thick but airy. Still, the size bothered me enough to call Nwaeze, who apologized and went on to explain that one of his assistants had made the crusts too small that day. Customers, Nwaeze said, should have been told and also charged a lower price. Our server evidently had forgotten.

Chef Point Café was fairly crowded both times I was there, with families eating next to people dressed for dinner. It would take a dozen visits to eat your way through the menu, and then you’d still have daily specials to try. There’s also a Saturday brunch with things like eggs Benedict and fresh blueberry pancakes. Everything is made to order and made from scratch, and it tastes like it.