The city’s got a plan to wring some extra change out of downtown visitors. 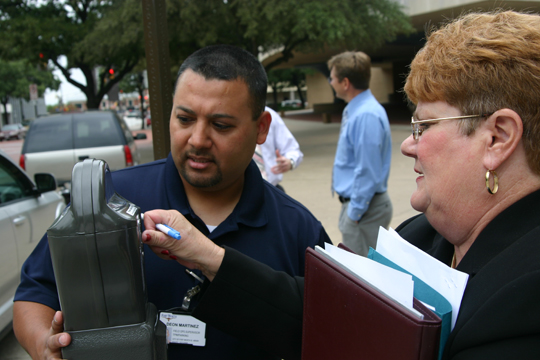 Park a car curbside in downtown Fort Worth, step out to feed the meter, and sometimes a nice surprise awaits – 10, 20, 30 minutes, maybe even an hour’s worth of time left on the meter from a previous parker with obvious time management issues.
Woo hoo! It’s like finding quarters at your feet, but better because you don’t even have to bend over.
The future of those little karmic gifts is at risk, though. As part of a pilot project overseen by the city’s Parking Services crew, sensors are being buried two inches deep in the asphalt beneath 50 parking spaces to monitor the traffic pulling in and out. The amount of money being dropped in and the length of time cars stay are among the kinds of information being gathered. But the sensors offer another feature: When cars leave the spaces, the sensors note it – and automatically reset the meters to zero. Subsequent motorists must ante up anew.
“That’s a crock,” said Robert Dorrough, who works downtown and usually parks in metered spaces. “The culture and attitude of the city is to stay small-town and friendly even though we’re a big city. To do this is just another step toward being Dallas.”
Fort Worth and North Texas are doing well despite a struggling economy nationwide, and resetting the meters to zero after each car leaves is “nickel-and-dime-ing” residents, he said.
City officials say the pilot project is just another step in the evolution of the downtown parking scene. Peter Elliott, manager of administrative services for the parking department, said the city’s population growth in recent years, and the continuing development of downtown residences in particular, is increasing demand for the approximately 2,000 metered spaces.
“We’re going to have greater demand in Fort Worth for parking than ever before,” he said.
The city tries to keep those spaces available for the quick-stop visitors who come each day to shop, visit city hall, attend court, eat at a restaurant, or maybe pay a traffic ticket. Maintaining frequent turnover among parked vehicles was the city’s impetus in 2005 to ban “meter feeding.” Maximum time limits as low as one hour are set on some meters, and an ordinance now bans drivers from dropping fresh coins into the slot when time runs out. The message was clear: If you work or live downtown and plan to park your car there all day, find a parking lot and stay out of the metered spaces.
“Turnover is probably our most critical issue,” Elliott said.
Turnover frees up spaces, which helps reduce the number of cars endlessly circling around looking for curbside parking. This, in turn, cuts down on traffic congestion.
Database Consultants Australia installed the sensors, referred to as vehicle detection units, to give city officials a unique overview of downtown motorists’ parking habits. And in the future, it could be expanded to give motorists similar information – a sort of GPS that will show motorists in correctly equipped cars where available spaces are, Elliott said.

The three-month pilot project was implemented in July and so far hasn’t cost taxpayers anything. Database Consultants offered to install the sensors and provide three months of monitoring data to try to convince city leaders to buy their system for more city streets. The first 50 sensors were installed in Sundance Square. If the city decides to pursue widespread use of the sensors, a contract will be up for public bid.
“We want to understand the technology and see if it brings anything to the City of Fort Worth,” Elliott said. “We may try it and determine it’s not for us.”
A couple of other data-gathering companies have offered similar technology for pilot projects, and Elliott said they might all get test runs before any recommendations are made to the city council.
Another change in downtown’s metered parking is the advent of “quads,” or parking meters that accept money for four parking spaces. Motorists are instructed to put money in the meter and select the appropriate parking space – A, B, C, or D. Quads reduce the number of meters and poles alongside city streets and make it easier for employees to collect money. The cost savings can be impressive as well. Four single-head meters cost $2,000, plus the cost and installation of four poles. A quad cost $600.
Quads have another advantage: durability. Vandals and thieves make a habit of destroying meters, taking money, and forcing the city to buy and install replacements. “We’ve lost in excess of 500 meters in the past three years,” Elliott said, at an expense of about a quarter-million bucks.
Cost isn’t the only problem. The city has found it difficult to replace the meters, and about 200 parking spots are awaiting replacements for vandalized equipment.
Quad meters take a little getting used to. “I’ve never seen one like this before,” said Charlene Davis, a sales manager from Bedford who was visiting downtown recently on business. “I hope I push the right buttons.”
She quickly figured out the process with assistance from the parking department’s field operations supervisor Deon Martinez, who happened to be nearby. After Martinez explained the reasons for the replacements, Davis deemed them a “very nice” improvement over the single meters.