Any preconceived notion of doom-metal takes
Four Days to Burn.

Easy categorizations are hard to find when talking about Fort Worth’s down-tempo punk quintet Four Days to Burn. They excel at fast, skull-rattling sonic assaults, but their trademark sound is a deliberately drawn-out, rhythmically chaotic, codeine-drowsy stagger. The band eschews the “goth” label, yet everything from the medieval font and imagery on its concert posters to the adoration of horror movies shared by its members telegraphs an obsession with death, decay, and suffering. They disavow commercial metal comparisons but find themselves sharing bills with clearly commercial metal acts. 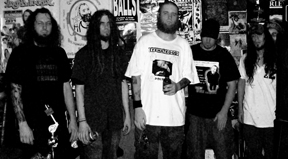 Daniel Naron, the band’s 30-year-old bassist, struggles to find the appropriate way to describe what his band conveys onstage. He doesn’t offer another band or mixture of bands as a comparison, but an underground movie that is both acclaimed and reviled: E. Elias Merhige’s famously unpleasant 1991 Begotten. The director has said that his film savagely if obliquely depicts the death of God, which causes the birth of Mother Earth and humankind who, in turn, meet their gory fate at the hands of a sub-human species … or something like that. (Marilyn Manson later tapped Merhige to direct a couple of music videos.)
For Naron, Begotten is “like a Rorschach test, in that you never know what you’re seeing, and you have to interpret everything,” he said. “It’s shot in extreme black and white, like they’re using the movie camera negative, and there’s no dialogue except for these wheezing sounds.”
Precisely because of its ominous impenetrability, the movie is a big influence on the five guys in Four Days to Burn: bassist Naron, lead singer (or maybe “primal screamer”) Scott Shields, guitarist and chief songwriter Jeremy Smith, guitarist-vocalist Jason Villarreal, and drummer Barney McKinney, all thirtysomething Fort Worth natives. (McKinney, though he’s been playing in bands since he was 17, is the grand old man at 32.) The other members also have performed with quasi-metal and pop-punk groups like Cadillac to Mexico, Lab Rabbit, and Dirt Merchant.
As a unit, the 4D2B members share a few personality traits. “None of us are what you’d call the outgoing, social type,” said Naron with a chuckle. “I wouldn’t say we’re miserable, but I think we see life as painful and hopeless a lot of the time.” His own deDELETEion for Four Days to Burn is “a stoner-ish doom-style band” whose primary influences are Black Sabbath and two California bands that feature the sludge-metal stylings of revered guitarist and vocalist Matt Pike: Sleep and High on Fire. In defense of a band that experiences its share of walk-outs – even as openers at a White Zombie tribute show – Naron said of 4D2B’s live sets: “A lot of people have ADD today. They want to be entertained on-demand, at their own pace. But sometimes we’ll hold a single note for 35 seconds. We have eight- and 10- minute songs. We’re not trying to impress anybody, but the people who like us really seem to like us.”


Naron taught himself to play guitar in his 20s, and then decided to try the bass – it was his quickest route to getting into a band – but found its strings uncomfortably thick and spaced too far apart. Nonetheless, he persevered, and his primitive skills as a bassist earned him membership in the group Cadillac to Mexico. But another band called Black Sun Ship had enchanted him with its dread-filled, wall-of-feedback sound. When the original bassist of that group departed amicably, Naron auditioned as a nervous fan and was accepted. Appropriately, his first gig with the band was a Halloween-night house party in Granbury in 2005. But before he could take the stage, however, he had to institute another change: The original bass player had chosen the name Black Sun Ship, so new bassist Naron was charged with renaming the group, whose members – Shields, Smith, McKinney, and Villarreal – wanted to take their music in a looser, dirtier, more methadone-ish direction.
“Four Days to Burn” was the name of a Black Sun Ship song, and Naron was intrigued by the title. Drummer McKinney’s grandmother “wanted to be cremated after she died,” Naron said. “His family was told by the funeral home that it takes a body four days to burn to be cremated. When I heard that, I knew that the name had a cool meaning.”
Naron brought something else to the newly christened band: a talent for inserting stray, pre-recorded audio samples into the trance-inducing noise. In songs like “High as a Goddamn Kite” and “Worse Than Bad,” he took dialogue snippets from Abel Ferrara’s 1992 Bad Lieutenant – “the part where Harvey Keitel is bitching at Jesus in church” – and Sidney Lumet’s 1976 Network and then “chopped and screwed” them, which is hip-hop argot for digitally altering the pitch or pace of a sample to render its source nearly unrecognizable.
Worse Than Bad is the name of the band’s upcoming five-song EP – and, indeed, it quotes directly from one of actor Peter Finch’s on-air rants in Network about the degraded, soulless condition of the modern world. Four Days to Burn agrees wholeheartedly with such sentiments. Naron admits that catharsis plays a role in what would seem to be the group’s incorrigibly bleak worldview.
“There’s a small core audience that wants to hear our music,” he said. “And it makes us happy to put these songs out there.”