The overheated but enjoyable Cadillac Records tells the story of Leonard Chess, the Polish immigrant (whose last name was changed from the similarly pronounced Czyz) who founded Chess Records, a mid-20th-century Chicago label that scored massive hits, made recording stars, and changed the course of popular music. The company was known informally as “Cadillac Records” because Chess initially sold LPs out of the trunk of his car and also because so many of his musicians came to own Cadillacs, though they often ended up short of cash due to Chess’ bookkeeping practices. His run of success ended with his premature death from a heart attack in 1969, though he did not die – as this movie tells it – while moving his personal items out of the Chess Records building after selling the company. This story detail is sadly typical of the cavalier way this film treats historical fact. 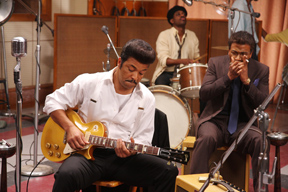 Adrien Brody portrays Chess, but a parallel storyline follows Muddy Waters (Jeffrey Wright), the Mississippi sharecropper who became Chess Records’ first star with his electrifying blues guitar stylings. Wright steals this movie from his Oscar-winning co-star, and this movie is a prime opportunity to savor the small-scale brilliance of this frequently overlooked actor. One of Wright’s first roles was starring as the feted painter in the 1996 biopic Basquiat, but stardom has eluded him ever since. I think it’s because he’s just too cool. Always self-possessed and reserved, Wright is an assured presence even in showy roles like the mentally disintegrating war veteran in the remake of The Manchurian Candidate or the tranny nurse in the TV version of Angels in America. He successfully played a backstabbing underling in Syriana, but he’s more often cast as self-effacing company guys trying to hang on to their decency amid ethical chaos, whether he’s playing Colin Powell in W. or 007’s CIA friend in the last two James Bond movies.

That’s pretty much what he does here. Muddy tries to balance his loyalty to Chess with his knowledge that he’s not getting the royalties due him, while also patching up his marriage after his wife (Gabrielle Union) discovers his infidelity, crossing swords with Howlin’ Wolf (Eamonn Walker), watching his own star being eclipsed by Chuck Berry (Mos Def) and rock ‘n’ roll, and trying to keep hard-drinking harmonica genius Little Walter (Columbus Short) and damaged, drug-abusing singer Etta James (Beyoncé Knowles) from destroying themselves. Through this ridiculous excess of plot, Wright’s underplaying serves him well, particularly in an early scene when Muddy first hears himself sing the blues via Alan Lomax’s field recording. Wright barely moves or changes expression, yet you can feel Muddy instantly sensing the magnitude of his own talent.

I actually thought Beyoncé might steal the movie away from Wright for the first five minutes of her screen time. She doesn’t show up until halfway through the film, and she has Etta James’ earthy, pained demeanor down, coming off as much coarser and more belligerent than she was as the demure, polished lead singer in Dreamgirls. What sinks her are Etta’s two lengthy scenes with Leonard later in the film, showing her in different stages of wreckage. The little slips and imprecisions in Beyoncé’s delivery trip her up, and the role demands more darkness than she’s capable of delivering.
The story obeys the same music-biography conventions that we last saw being parodied in Walk Hard. This film is by Darnell Martin, the writer-director who has largely been confined to TV since his 1994 filmmaking debut I Like It Like That, a movie pitched at Latino audiences at a time when very few other movies were. He doesn’t have the advantage here of working in a field where there’s no competition, and his sense of drama is incurably hackneyed and unsubtle.

Enough about that. This movie exists for the music, and Chess Records’ biggest hits are meticulously duplicated in their original arrangements, with the actors doing their own singing. They seem remarkably unfazed by the challenge of impersonating musical giants, especially Wright with his dead-on evocation of Waters’ elegant, dangerous allure on “I Can’t Be Satisfied” and “I’m Your Hoochie Coochie Man.” Walker can’t howl like the Wolf but conjures the man’s frightening intensity on “Smokestack Lightnin’,” while Short (made up to minimize his good looks to portray Little Walter) delivers a swaggering, smoldering version of “My Babe.” Mos Def sounds nothing like Chuck Berry but looks like he’s having enormous fun doing the duck walk and covering “Maybellene” and “No Particular Place to Go” – finally this actor’s comic skills find a proper outlet. Then, of course, there’s Beyoncé, who wisely doesn’t try to match Etta James’ power. On her own terms, she puts real snap into “I’d Rather Go Blind” and even manages to blow some of the dust off “At Last.” These songs make Cadillac Records yet another music film that’s much more fun to hear than it is to see.