Look up “survivor” in the unabridged dictionary and you’re bound to see a picture of New York rocker Walter Lure’s porkpie-hatted mug. Present at the creation of punk (CBGB’s, class of ’75), Lure was the “other” guitarist-singer-songwriter in Johnny Thunders’ Heartbreakers. He brought a soupçon of Bowery authenticity (and the heroin plague) to the nascent U.K. punk scene when he joined the Sex Pistols’ ill-fated 1976 Anarchy Tour. The Heartbreakers ceased operations permanently in the early ’90s when founding members and ex-New York Dolls, Thunders and Jerry Nolan, succumbed to lifestyle consequences. 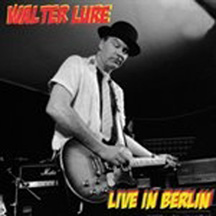 ay if you can find it – has also endured several members’ deaths. Undaunted, he continues gigging sporadically around New York City while working as a stockbroker (really!). In 2007, he undertook a brief European tour with a pickup outfit (“my band of Belgians”), like a punk-rock Chuck Berry.

Ten of Live in Berlin’s 14 tracks, including signature songs “Too Much Junkie Business” and the Dee Dee Ramone-penned “Chinese Rocks,” are from the Heartbreakers’ songbook, reflecting Lure’s sizable contribution to their repertoire. The HBs were known for their splenetic onstage repartee, but the mature Waldo has toned down his persona, from wiseass thug to likable lug.

His Bowery boy’s bark, thunderous chords, and double-stop bends are still intact, however, and rather than sounding haunted by his ghost-filled past, he sounds triumphant, buoyed by the European band and the crowd’s enthusiasm. Only non-snazz aspect: a couple of sub-par vocal turns by guitar foil Dee Jaywalker. While hardly supplanting the HBs’ classic Live At Max’s Kansas City, this set is a guaranteed ear-opener for anyone who thinks “old-school punk” means Suicidal Tendencies.