For Hollywood this year, 3-D filmmaking seems to be the new old wave. At least 12 more 3-D movies are slated to hit our theaters before next January, including Pixar’s Up, DreamWorks Animation’s Monsters vs. Aliens, the Jonas Brothers concert movie, and even a three-dimensional version of A Christmas Carol. Mark Cuban recently called 3-D “the LSD of 2009.”


I’m not sure this isn’t just a fad, like it was in the early 1950s and the early 1980s. I still haven’t seen a film that takes full artistic advantage of the capabilities of 3-D. However, I have to say that the stop-motion animated film Coraline comes closer than anything Hollywood has given us so far. 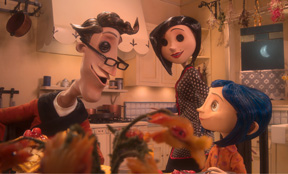 The film is adapted from Neil Gaiman’s subtly terrifying 2002 novel about an 11-year-old girl named Coraline Jones (voiced by Dakota Fanning) who’s just moved to the Pacific Northwest, into an ancient mansion that’s been divided up into apartments and painted a rather pathetic shade of pink. She’s bored and frustrated because she’s left all her friends behind, and her parents (voiced by Teri Hatcher and John Hodgman) manage to ignore her even though their jobs as writers allow them to work from home. The only people she has to talk to are dotty elderly fellow tenants who keep mistakenly calling her “Caroline.”

Thus she’s overjoyed when she discovers a secret doorway in the house that leads into another world much like the one she lives in, only with brighter colors and talking animals and cooler versions of her parents (also voiced by Hatcher and Hodgman) who dote on her, cook delicious food for her, and go to elaborate lengths to entertain her. It only seems to matter slightly that the new parents have black buttons instead of eyes. Later on it matters a great deal, since the other mother turns out to be a beldam, a witch who has created an entire fantasy world tailored to the girl’s wishes so that Coraline won’t resist having buttons sewn over her eyes and her soul stolen.

The animator behind all of this is Henry Selick, who previously made The Nightmare Before Christmas, an under-appreciated adaptation of Roald Dahl’s James and the Giant Peach, and a fascinatingly messy foray into live action, Monkeybone. Working in the labor-intensive field of stop-motion animation, he has carved out a style as unique and imaginative as the great Nick Park’s (of Wallace & Gromit fame), though he’s neither as funny nor as good at delivering visceral thrills. Coraline was adapted only last summer into a disquietingly realistic graphic novel by P. Craig Russell. Selick’s film takes the material in the opposite direction, using meticulously outfitted plasticine dolls for the characters and contrasting the overcast drabness of Coraline’s world with the moonlit unreality of the beldam’s.

The middle section of the film is just glorious. The beldam’s world is seductively beautiful, with a circus of performing mice, a garden laid out to look like Coraline’s face from the air, and a vehicle driven by her dad that looks like a giant praying mantis. Wondrous as that mantis is, it’s also one of many subliminal hints that all isn’t well. When the snapdragons in the garden playfully twist themselves around Coraline’s ankles and pull her down, you know they won’t always be so friendly. The same goes for Hatcher’s voice work – her small, grainy voice wouldn’t leap to mind as one belonging to an evil sorceress, but the warm, treacly tone she adopts for the fake mother is right on, and it contrasts well with the dull, preoccupied voice she gives to Coraline’s real mom. Much like Pan’s Labyrinth (which this movie cheekily refers to during its climax), Coraline intentionally presents us with a fantasy world that’s just a little too shiny and perfect to be believable.

Coraline isn’t as scary as Pan’s Labyrinth, which is a main reason why it isn’t as good. Oh, it’ll still be too intense for very small children, and for overprotective parents looking to shield their kids from anything too edgy. Yet even though the story touches on all sorts of primal fears (rats, bats, zombies, fetuses, giant insects, enclosed spaces, parents who turn into monsters), the film doesn’t pack the same shivery power as Gaiman’s novel or Russell’s graphic novel. You’d think the movie would use its three-dimensionality to make us jump in the last third, when the beldam starts to reveal her true nature. Instead, the 3-D effects add surprisingly little in the way of horror.

OK, so this movie doesn’t have everything. The technique of its handcrafted animation is still remarkable, and Coraline has bounteous amounts of imagination, wit, and beauty to go with it. More than just a good fantasy story, this is a shimmering, thoroughly worked-out artistic vision that’s unlike anything else in the theaters. Let’s see if Pixar, DreamWorks, or the Jonas Brothers can top this.