Like many Asian cultures, the Vietnamese celebrate the lunar New Year. They call it Tet, and on Jan. 26, Vietnamese people welcomed in the Year of the Water Buffalo (slightly different than the Chinese’s Year of the Ox). During Tet, it’s customary to give presents and, among other things, avoid eating shrimp. Apparently, shrimp are one of the few foods that don’t bring success on the first day of the new year.

Regardless, if you go to Pho Bella in Haltom City, you’ll want to try anything with the chao tom — the shrimp mousse — whether it’s lucky or not. It’s not like fluffy dessert mousse. Here it’s a dense, salty, terracotta-colored paste with fish sauce and other spices. The spring rolls with shrimp mousse and sugar cane were a delight and a nice change from the standard sliced-shrimp-and-pork version. The rice wrappers were wonderfully fresh and not tough: the sign of fresh-made spring rolls. 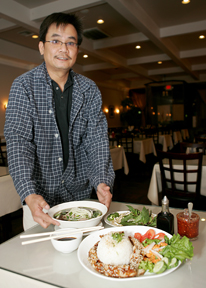 You also get grilled shrimp; some perfectly crunchy, spicy egg rolls; and cubes of pork and beef. Pho Bella serves the bounty with vegetables, imperfect yet still tasty rice, and a flavorful sauce. After you get done eating all of the meat and fish, the rice soaks up the sauce perfectly.

Factor in a delicious, heavily sweetened Vietnamese iced coffee (doctored with condensed milk and twice as strong as a double shot at Starbucks) and a boba tea, and you may be tempted to stop there. But press on. You’ll come across more hits than misses.

The dry-noodle vermicelli with grilled pork, savory veggies, and more of that shrimp mousse was a mixed bag. The mousse and egg rolls were delicious, but the pork, while tasty, was fatty, and the noodles were sticky and gelatinous.

The rice pancakes with pork and shrimp were a delightful surprise. The entire entrée was bright yellow, courtesy of a little turmeric powder, and the pancake was chewy and scrumptious. It was served with lettuce leaves, with which you’re meant to wrap chunks of the pancake. The side serving of pickled carrots and daikon radish was absolutely marvelous. The shrimp were tasty, but the pork in the pancake didn’t have a lot of flavor, and there were just too many bean sprouts.

Pho Bella offers an extensive menu, with versions of different Asian dishes. However, extensive selection sometimes means that certain things aren’t ordered often, and they may not be the freshest or the best prepared. Stay away from the Korean barbecue with fried rice. The ribs were dry and stringy, and the rice simply lacked flavor.

The restaurant looks beautiful and restful. The color scheme is subtle, and muted black-and-white pictures of elegant women line the walls. It’s fairly inexpensive. But other than the chic décor, there’s not a lot to differentiate it from any of the other Vietnamese restaurants that grace Haltom City. On a recent visit, the potentially tranquil atmosphere was marred by loud music, and the service was uneven — the main dishes came out one at a time instead of all together. Fair warning: There’s a bit of a language barrier at Pho Bella. But with a little patience and ordering by the (right) numbers, you shouldn’t have too much difficulty at this pretty little restaurant.