You might mistake the slight, raunchy, thoroughly charming I Love You, Man for one of Judd Apatow’s movies, especially since it stars two actors who’ve worked for him extensively in the past. In fact, Apatow is neither a writer, director, nor producer on this affair. This movie is a knock-off of his work, though it’s a pretty good one, it should be said. 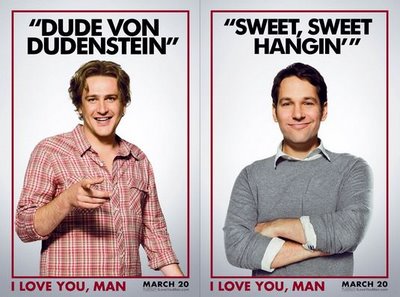 Structured like a conventional romantic comedy, the film is about Peter Klaven (Paul Rudd), an L.A. real estate salesman who’s looking to buy and develop his own property as soon as he sells Lou Ferrigno’s mansion and earns his commission. His love life is going similarly well: The film’s opening shows him proposing to his longtime girlfriend Zooey (Rashida Jones), who says yes. Peter realizes that he has no close friends only when they start planning their wedding and he needs a best man. In most movies like this, the straitlaced hero learns how to loosen up by meeting a kooky, free-spirited sprite of a woman. Instead, Peter meets Sydney Fife (Jason Segel), a fun-loving single guy with a sharp eye for human behavior and a disarming candor about his sexual preferences for older, newly divorced women. The two bond over their shared foodie obsessions and their love of the band Rush, but their friendship has unexpected repercussions on both Peter’s job and his relationship with Zooey, especially after Sydney spills a big secret during a toast that’s almost as appalling as the one in Rachel Getting Married.

Actually, Sydney is just as much of an artificial construct as any of his kooky, free-spirited female equivalents. If he feels more real, it’s because of the effortless chemistry between these lead actors. Rudd and Segel worked together before in Forgetting Sarah Marshall, wherein Segel played straight man to Rudd’s stoned surfing instructor. Here the dynamic is reversed, with Rudd playing the earnest dork (though he’s so winning in that opening sequence) who learns to cut loose around a raffish, surprisingly self-assured Segel. Rudd is particularly good in a running joke in which Peter tries to make up cool phrases (“totes magotes”)  and falls flat. It’s difficult to be funny when you’re playing a character who’s unfunny, yet Rudd makes it look easy. Rudd and Segel are good enough to wring laughs even out of a seeming throwaway scene when Peter tries on tuxedos and Sydney gets him to strike a few poses.

Director/co-writer John Hamburg, who made the 2004 film Along Came Polly, occasionally descends into hackdom here. Supposedly a successful investment broker, Sydney lives in a small, broken-down house and seems to have endless amounts of free time, and though the movie is setting us up by presenting him this way, it’s still a loose end. Nevertheless Hamburg gives these actors enough material to work with, and the early montage of Peter looking for new friends comes to not one but two explosively funny climaxes. Mostly, the filmmaker gets out of his actors’ way, and they make this movie a more persuasive comedy about male friendship than Superbad. I’m not ashamed to say it. I love Paul Rudd and Jason Segel, man.