A hero complex is an incredibly dangerous quality in someone with no heroic qualities. That’s the lesson of the Bush administration, and it’s also the lesson of Observe and Report, which is being sold as a comedy but is in fact the scariest movie so far this year. 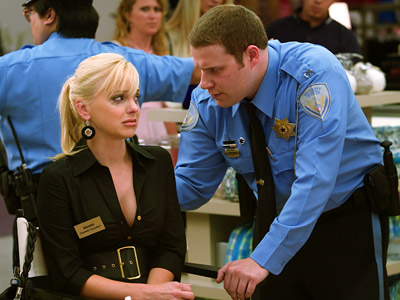 The writer-director is Jody Hill, who made last year’s polarizing martial-arts comedy The Foot Fist Way. Much like that movie, this one has a main character with no awareness of his own lowly station in life. He is Ronnie Barnhardt (Seth Rogen), a shopping mall security chief whose bipolar disorder prevents him from joining the proper police force though not from harboring fantasies of saving the world. When a flasher starts exposing himself to the mall’s shoppers, Ronnie goes on local TV news and vows not only to catch the pervy perp but to kill him as well. His resolve is further strengthened when the sexual deviant gives a traumatizing glimpse of his naked self to Brandi (Anna Faris), a cosmetics saleswoman on whom Ronnie has such a crush that he doesn’t notice what a dimwitted drunk she is.

If you’ve grown used to seeing Rogen as a loud, genial teddy bear, his soft-pedal performance here shows him in a new light. Ronnie beats up a bunch of pubescent kids for violating the no-skateboarding ordinance, but he’s even more unsettling during his awkward attempts to make small talk with civilians, which only reveal how disengaged he is from reality. Sporting a severe haircut and a clean-shaven face, Rogen deploys just enough of his charm to create pathos for the maladjusted mall cop, yet he also locates a core of serenity in this self-styled savior that makes the character’s delusions dangerous to everyone around him. You feel this sharply when Ronnie’s stranded at a street corner infested by crack dealers and faces the armed thugs with a total lack of fear or false bravado. Near the movie’s climax, Ronnie’s quasi-religious voice-over monologue is littered with such lines as “I see my path laid out before me. … The world has no use for another scared man. … I am a hammer in the hand of righteousness.” Rogen’s quiet delivery of this speech is downright terrifying.

The director might have given more shape and thrust to this story, but the movie’s constant ability to evoke nervous laughter keeps its momentum from flagging. You’ll often find yourself thinking “This can’t lead anywhere good,” as when Ronnie shoots off a large-caliber gun at a firing range, when his behavior goes off the rails while he’s being interviewed by a police psychologist, or when he’s introduced to recreational drugs by his lisping fellow security guard (Michael Peña). Most appalling is Ronnie’s date with Brandi – she’s way more excited about doing tequila shots than talking to him, and he’s starstruck by her beauty even when she’s throwing up. (The sequence is punched up by Faris’ virtuoso turn, matching Rogen stride for stride in comic loserdom.) Long before Ronnie earns a small measure of redemption with an unsurprising amount of overkill, Observe and Report becomes a descent into the depths of madness that’s funnier than it has any right to be. l