American Violet is the sort of movie that Hollywood used to love making. It’s a story of racially tinged injustice that lends itself to the sight of heroic, downtrodden African-Americans and their enlightened white friends crusading against the prejudices of a bunch of rednecks who look like they just crawled up from the swamp. 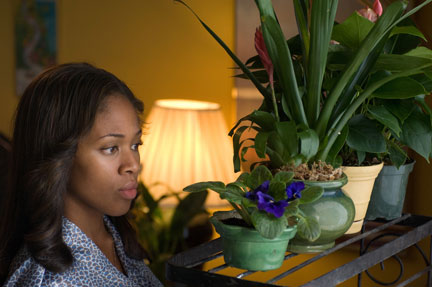 What could be more inspiring, especially for audiences looking to congratulate themselves on being on the right side of history? These days, however, the only time civil rights struggles seem to come up in movies is in the context of a sports film (The Express, Glory Road). Hollywood prefers to leave that stuff in the past. Maybe that’s why the major studios didn’t make American Violet, leaving it to independent filmmakers to tackle this true story. Sometimes that’s a good thing, because indies are free to give the story less polish and more subtlety than a Hollywood treatment would accomplish. This isn’t one of those times.

The plot is based on the story of Regina Kelly, an African-American waitress who in November 2000 was scooped up in a military-style drug raid on her housing project in the town of Hearne, near College Station. This much of what the movie tells us is true: She was a mother to four young girls. She was wholly innocent of the crime she was accused of (dealing drugs in a school zone). Her accuser was a single and extremely unreliable confidential informant. She spent three weeks in jail. The charges against her and everyone else arrested in the raid were dropped due to lack of evidence. She sued the district attorney with the help of the ACLU and forced police to alter their drug-enforcement practices.

The fact that everybody’s names have been changed should tip you off that the rest of the movie’s history is seriously compromised. (Meanwhile, the fact that this movie, set in Texas, was actually shot in Louisiana should tip you off as to why Gov. Rick Perry is trying to revive our state’s film industry.) Here the heroine based on Kelly is named Dee Roberts (Nicole Beharie), and she lives in the fictitious town of Melody. After landing in jail, she’s saddled with an idiotic public defender (Paul David Story), who joins her mother (Alfre Woodard) in begging her to take a plea bargain. That’s before her minister (Charles S. Dutton) sends her three lawyers: a nerdy Jewish ACLU guy (Tim Blake Nelson), a drawling Melody attorney recruited to relate to potential jurors (Will Patton), and an African-American (Malcolm Barrett) who at first seems to be there for window-dressing but later plays a key role in the legal proceedings. The movie’s title refers to Dee’s habit of keeping violets in her apartment.

In the tradition of bad drama everywhere, Dee and especially her legal team emerge as spotless heroes while the villains are as bad as bad can be. These include her sketchy baby daddy (rap star Xzibit) and his sex-offender girlfriend (Karimah Westbrook) who are trying to take Dee’s kids away. Bad as they are, they look like pillars of virtue next to the D.A. (Michael O’Keefe), who’s so loathsome and racist that his own family hates him. Writer Bill Haney and director Tim Disney – yes, he’s descended from the famous Disney family – pile on the signifiers by showing news footage of George W. Bush stealing the 2000 election as a way of telling us that the system is rigged. At its worst, this movie’s lack of subtlety approaches Tyler Perry levels.

Newcomer Beharie (whose film career prior to this consisted of one small role in The Express last year) looks a bit too put-together for a single mom in the projects, though in light of the character being a hairdresser’s daughter, maybe it makes sense that the character pays more attention to her appearance than most. She fails to give this role any human dimensions, which probably isn’t her fault given the bland way Dee is written. The supporting players give rote performances except for – no surprise – Woodard, who has a history of punching up bad movies with lively and insightful performances. (Interestingly, she does much better picking out good TV shows to appear on than she does with movies.) Commonsensical and snappy in this role, Woodard injects some much-needed comic relief.

The film does move along reasonably well, which only makes you think that Disney and Haney could have made this into something worthy if they hadn’t stretched the truth. The ability of prosecutors to abuse their power is too rarely discussed in the movies or in real life, and a straight-up telling of Regina Kelly’s story would have pressed home that point far more effectively than this movie does. American Violet‘s biggest and most dubious achievement is proving that indie movies can be as fast and loose with history as Hollywood. l