Well, well. April 15 was a day when the nuttier wing of the Republican party yet again managed to embarrass the rest of the GOP by holding a protest with the same name as a sexual practice (thus issuing an open invitation for mockery) and letting a few vile hatemongers come out and play to the cameras. Yet somehow on this day, Gov. Rick Perry managed to distinguish himself by hinting that Texas might secede from the United States.

Yeah! For too long Republicans from Alaska and Georgia have been the party’s standard bearers for prejudice, paranoia, and plain old idiocy. It’s time that Texas took back its rightful spot. Of course, the unhinged Michele Bachmann of Minnesota is always a threat to say something crazier than anybody dares to think, but it’s good to see Perry show some initiative in stupidity, just like the guy who preceded him in the governor’s chair.

Seriously, Gov. Perry is a disgrace. Nobody thinks he’s serious about secession. He just said that to win some votes toward his re-election. But if he needs to pander to these wingnuts to stay in power, what does that say about him? And why hasn’t his Republican party primary opponent Kay Bailey Hutchison jumped on this? She’s not afraid of offending the black-helicopter crowd, is she? Will any GOP politician show some backbone? And if Texas did secede, would Perry even win an election against Chuck Norris?

As you might predict, the late-night comics are having a field day with this. My favorite line was one of Jay Leno’s: “The good news is, if Texas does secede, we can invade it for the oil.” 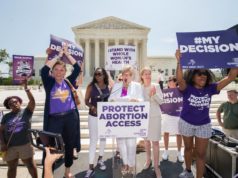