Last month, Jason Manriquez got to fulfill a longtime dream: He performed a set with his band, Fate Lions, at a local drag show. The 36-year-old lead singer, songwriter, and guitarist grew up in the San Francisco Bay area, so very little is outré to him. The Red Goose Saloon downtown hosted the band and a gaggle of out-and-proud drag artists as part of a fund-raiser for the upcoming Million Gay March of Texas, the Dallas edition of the gay rights march happening in major cities across the country later this month.

“I think Fate Lions is known as a group that’s not afraid to associate itself with this cause in Texas,” Manriquez said. “All of us have friends in the gay community. Someone e-mailed us and asked us to perform, and we said, ‘Of course.’ It was exciting.” 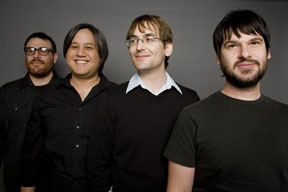 Manriquez, guitarist and singer Niki Saukam, bassist and singer Anthony “Bob Fante” Ferraro, and drummer Josh Hoover arrived at the Goose around 9 p.m. as requested but didn’t hit the stage until close to midnight. By way of explanation, one of the organizers informed Manriquez and company that there is “standard time” (“ST”) and then there is “gay standard time” (“GST”).

Perhaps the musical highlight of the evening was “The Queen Himself,” a jaunty, sparkling, echo-laden tune from Fate Lions’ superb Good Enough For You, an album recorded and mixed piecemeal during weekend sessions over the course of a year by Salim Nourallah at his Pleasantry Lane Studios.

From the album’s start in March ’08 to its release in March ’09, everybody’s schedules were crazy with work, family, and side projects. Ferraro creates tuneage with Eaton Lake Tonics and as his musical doppelganger, Bob Fante. Hoover played with The Chemistry Set and a bunch of other bands before officially joining the Fate Lions lineup during recording. And Manriquez and his wife conceived and gave birth to their first child, a daughter.

“It was a relief just to get the album finished and out there,” Manriquez said. “For a long, long time, people would come up to us at shows and ask us when it was going to be released. It was nice to have a physical object to hand them.”

The singer-songwriter expressed much gratitude to the busy Nourallah for taking time to oversee the album. Anyone who’s ever heard either of Nourallah’s solo CDs will recognize an overlap in sensibilities. Fate Lions, like Nourallah, make thoughtful but unrepentantly sumptuous pop with ear-tickling sonic flourishes such as creamy layers of background vocals, hand claps, tambourines, and enigmatic lyrics that step right up to the brink of melancholy but never fall into ennui. Saukam’s and Manriquez’ guitars retain just enough snarl to remind listeners of the mother lode of Teenage Fanclub, Elvis Costello, and Smiths songs that inform the Lions’ sound.

Good Enough For You also spills over with very personal content. “Astronaut” riffs on legendary Austin musician and benevolent space-case Roky Erickson; Manriquez once chatted with the legendary 13th Floor Elevators frontman’s brother, Sumner, at a protest outside George W. Bush’s ranch in Crawford several years ago. “All You Do is Crazy” concerns that stunning moment of maturity when young people realize they can’t really control life’s changes. For good fanboy measure, “Ride the Artifact” and “Seen It All” are sprinkled with references to the movies Donnie Darko and The Shining.

Indeed, one of the things Manriquez loved about working with Nourallah was that “he wasn’t afraid to be derivative,” he said. “He knew [references] could all be part of the texture of the music. He didn’t want to sacrifice ‘interesting’ to build a quality song.”

Right now, Fate Lions are concentrating on promoting their sterling new disc, although, again, bandmembers’ schedules have to be balanced. The band played SXSW for the first time last March, and Manriquez wants to expand the band’s audiences in Austin, Houston, and San Antonio. He’s already begun writing songs for an EP with a target release date of January. Be forewarned: It deliberately won’t sound very much like Good Enough For You. The EP’s title: House Ferrari. (“We can’t afford a Ferrari for each of us, so we’ll have to share,” he said.)

Meanwhile, Good Enough For You is available online. Copies have been sent to indie labels, college radio stations, alt newspapers and underground presses, and prominent blog sites. Manriquez waxes nostalgic about the glories of ‘zines: self-created and self-distributed publications full of stories, reviews, and art that help promote independent musicians. Blogs are the new ‘zines, of course, and Manriquez is intrigued by young fans who come to Fate Lions shows with technology in tow.

“The new generation communicates in a way that is very different from what I was taught to think of as ‘paying attention,'” he said, remarking on the phenomenon of concertgoers’ texting during a live show. “But that’s another source of promotion for the music, I guess. I hope they’re Twittering about us at least.”