Coming up for air in the middle of a period of obsessive listening to the 1964 Charles Mingus band with Eric Dolphy, I slipped this disc into the player and was surprised and delighted to discover a jazz release as fiery and feisty as that august unit. Matt Wilson is an Illinois-born drummer who’s logged time on the Boston and New York scenes, including a stint backing Fort Worth native Dewey Redman (he’s on the late saxman’s ace In London CD). That’s Gonna Leave a Mark is Wilson’s eighth album as a leader. 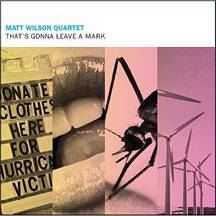 Together since ’96, the Wilson quartet boasts a frontline as fierce as the ones that used to feature prominently in Jack Dejohnette’s Special Edition  back in the ’80s. Andrew D’Angelo is as adventurous and expressive as Dolphy on alto sax and bass clarinet, while Jeff Lederer is equally muscular and exploratory on tenor and soprano saxes. Bassist Chris Lightcap, making his recorded debut with the quartet here, is an able accompanist and deft soloist, but it’s Wilson who anchors and propels the band with aplomb and abandon. His style is flashy and showy but not unduly exhibitionist. (No matter how animated his patterns become, he’s always playing the tune.)

Besides excelling as improvisers and ensemble players, the musos all also make strong contributions to the disc as composers. Except for two covers, of John Lewis and Dizzy Gillespie’s bebop classic “Two Bass Hit” and War’s funk hit “Why Can’t We Be Friends,” the tunes are a mixed bag of originals, ranging from D’Angelo’s Ornette-ish opener, “Shooshabuster,” to the lumbering rock groove of Wilson’s “Area Man” to Lederer’s ruminative tone poem, “Lucky,” to the careening free-jazz romp of the title tune. Overall, it’s a stirring and inspiring listen. Cop via www.palmetto-records.com. –