Michael Barnard is a wealthy Fort Worth real estate developer who owns property all over town. His latest project has an artistic bent, though Barnard is neither a big art collector nor a creator. What he’s doing is teaming with local artists to create studio space and a gallery on the near South Side that he hopes will bring in crowds of buyers who will make money for both him and the artists. 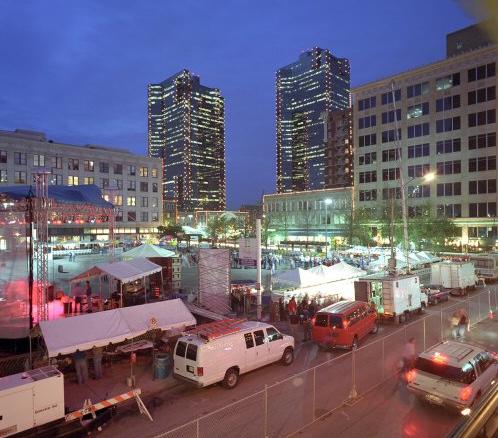 The space he’s now leasing to artists is the former Landers Machine Shop, just south of downtown in the South Main Street corridor. The cavernous factory was built in 1910 and added onto over the years. The building now encompasses more than 18,000 square feet of space, with high ceilings supported by steel trusses. Many of the original lathes and drill presses are still bolted to the concrete floors.

Barnard had originally thought the space might be best used for loft living units when he bought the property a few years ago. But he could see that market was getting oversaturated in Fort Worth. “I started to see that the artistic community was growing in this part of town and the market to lease studio space to artists was somewhat neglected,” Barnard said. “What we will be doing is creating a destination place fo

r the public and not just a space to create art.”

Within a year, Barnard hopes to have between 10 and 20 artists leasing space. They will work in one big room, divided into smaller spaces, and have access to transport trucks (for big sculptures, for example) through a huge metal bay door on the west side of the building. The gallery will be housed in another part of the complex. Barnard also foresees a wine bar and maybe a food court with local restaurants participating. On weekends live music might be forthcoming.

“We think this can be a destination spot for art lovers an d other people who want an interesting place to go,” Barnard said. “The public will be able to see the artists working, have an opportunity to buy their art, and maybe have some good wine and food while they are here.”

About five artists are already leasing space. Rick Bullock, who does large impressionistic paintings, likes the location and the design of the building. “Most artistic communities get concentrated near downtown areas, and this is happening now on the South Side,” Bullock said. “Much of the market for our art comes from people who live and work downtown, and what we have here is going to be very accessible to that market.”

Bullock also said the big space with big entrances is a plus. “Artists always joke that a big doorway is as important as anything else,” he said. “You need a door that you can get the big stuff through, and we have that here.”

Barnard is starting the serious renovations in the next few weeks and will keep most of the concrete walls and metal roof trusses. He also plans to exhibit art other than what is created onsite. Photographers Billy Stone and Byrd Williams IV (whose collection includes four generations of Fort Worth photography from him and his family) will be showing their work. Painter David Earp, grandson of famous lawman Wyatt Earp, will also be showing.

Contemporary realist painter Ann Ekstrom, who comes from a family of Fort Worth artists and is well connected within the Cowtown arts community (she serves on the board of the Emerging Artists Support League, which helps local struggling artists) will work as a liaison between Barnard and area artists.

Barnard said he saw how the art market has been changing over the past few years. While the heart of the gallery scene is still on the near West Side by the Cultural District (read: near the big money), the Southside scene is picking up. At the most recent Arts Goggle, a day and evening every March when Southside retailers transform themselves into temporary art galleries, Barnard featured works by Earp and Billy Stone, a monumental steel sculpture by Alice Bateman, and a multimedia narrative and performance art piece by Letitia Eldredge. About 200 people came through the Landers Machine Shop doors on that cold March night.

“I just have this feeling that the market here in Fort Worth is ready for a place like this,” Barnard said. “More people are moving in around here, and the entertainment and restaurant scene is growing on Magnolia Avenue. And if 500 people come down here to tour the Rahr brewery every Saturday, I think we can get the same number to come down to see art, drink some wine, and maybe buy some art made by the locals.” – Dan McGraw

Vince Bell delivers a literate one-two punch with the simultaneous release of a CD and a book, both of which serve as ideal introductions to this native Texan who has flown under the radar for much of his career.

Bell performed in clubs around Houston and Austin during the 1970s Outlaw music phenomenon that spawned the “Willie, Waylon, an’ the boys” era, and in 1982 he was recording a studio demo that he felt certain would catch a record label’s attention. Instead, it catapulted him headfirst into an abyss.

After recording with guitarists Stevie Ray Vaughan and Eric Johnson in an Austin studio, Bell was driving home, feeling one step closer to chiseling himself a place among the pantheon of Texas singer-songwriters, when a drunken driver broadsided him, sent him through a shattered window, and landed him comatose in a hospital. A severe brain injury meant many years of rehabilitation, learning to walk and talk and, eventually, to play guitar and sing again.

The book tells the tale in a compelling narrative fashion, although Bell’s poetic tendencies occasionally weigh down the paragraphs — some of his ornate passages require some deciphering. Much of Bell’s past was wiped from his mind by the crash, but he recalls some interesting adventures of life on the road, including a raucous but ultimately depressing night spent with a soused Townes Van Zandt, who bumbled his way through a gig, bummed a ride home with Bell afterward, insisted they take home a homeless wino, then locked Bell out of a hotel room onto a balcony on a freezing Houston night.

Exhaustive details about Bell’s injuries and recuperation bog down the book’s flow, but finding a more insightful and elegiac look into one man’s journey through brain-damaged hell would be difficult.

The CD, on the other hand, is uplifting throughout, even in the quietest, most poignant songs. A sparse production featuring Bell on guitar and Ned Albright on piano highlights the inspired, astral aspects of Bell’s lyricism. Most of these songs can be found on previous albums but are given excellent reincarnations here, befitting an artist who, in effect, rose from the dead.

Neither book nor album needs the other to be enjoyed, but consuming them both at the same time, as I did, provides a rewarding trip. – Jeff Prince