What a strange play is Harvey, Mary Chase’s 1944 Pulitzer Prize winner. It’s as dated and syrupy sweet as a fruitcake, yet it also contains punchy comic repartee and an otherworldly charm that’s grown more potent with the decades. Indeed, the script functions surprisingly well without Jimmy Stewart’s patented aw-shucks befuddlement at its center, as Theatre Arlington’s current solid revival demonstrates. 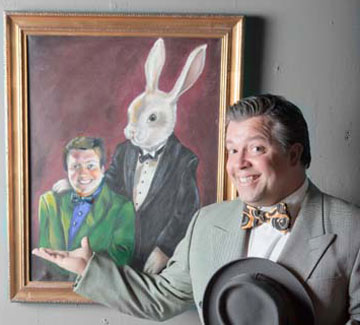 The many years since Harvey‘s stage debut have also thrown into sharp relief the play’s two main features: the eponymous, invisible, 6-foot-tall white rabbit, and the alcoholism of card-carrying gentleman Elwood P. Dowd. The former is identified by the playwright as a “pooka,” a Celtic spirit that takes the form of a talking animal and who protects society’s weaker elements, including the addicted and the mentally ill. The hazy, genial Elwood (played with crisp bravado by departing artistic director B.J. Cleveland) certainly qualifies as vulnerable: He spends most of his days loitering in downtown bars and often invites strangers back to the ancestral home he shares with his social-climbing sister Veta (Shirley Orr) and niece Myrtle Mae (Jacque Wahl). The women hatch a plan to commit Elwood to the local sanitarium run by Dr. Chumley (Michael Craig Rains), whose brutish attendant Duane (Scott Crew) enforces strip searches and “cold water treatments” that today wouldn’t sound out of place at Abu Ghraib.

Under the hand of accomplished guest director Charles Ballinger, Theatre Arlington’s Harvey never dodges the intriguing antiquities and just plain oddities of the play while maintaining a vigorous, thorough line of comic freshness. Even the unseen, towering bunny comes across as equal parts weird and whimsical. I’ve always been a little unnerved by Elwood’s assurance to another character — who, of course, cannot see Harvey — that they shouldn’t be alarmed at the animal’s stare because “he stares at everyone that way.” What way is that? Anthropomorphized rabbits should munch amiably on carrots and chatter away in Jersey accents, not burn holes through you with a quiet, critical, calculating expression. Top that off with Harvey’s casually referenced ability to manipulate time and space, and you’ve got a leporid that more closely resembles Donnie Darko‘s messenger than Peter Cottontail. Playwright Chase seemed determined to drop a tiny hint of supernatural menace into Harvey’s mystery, and Theatre Arlington doesn’t balk at it.

On the matter of Elwood’s chronic drinking: It’s not fair to judge the past by our present obsession with 12-step recovery programs, except that modern ideas about alcoholism were already circulating by the time Harvey opened on Broadway in 1944. The Lost Weekend won the best picture Oscar in 1945. Tennessee Williams’ first two great plays, The Glass Menagerie and A Streetcar Named Desire, both debuted during Harvey‘s five-year New York run and were haunted by very realistic notions of how addiction destroys lives. The Harvey script feels as though Chase wanted to acknowledge Elwood’s alcoholism, especially in the character’s heartbreaking “Nobody ever brings anything small into a bar” monologue, and also sentimentalize it via sister Veta’s unconvincing, eleventh-hour change of heart at the sanitarium. Even Jimmy Stewart lobbied to deliver a more desperate interpretation of Elwood in the 1950 film version, and, when that was denied, he reprised the role with the desired darker undertones in a 1972 TV remake.

Then again, any Harvey that hewed too close to the harrowing accuracy of, say, William Inge’s Come Back Little Sheba — a kitchen-sink weeper about the bottle’s toll also from that period — would lose the precious naiveté that is probably the secret to its huge appeal. There are multiple pleasures in Theatre Arlington’s brisk staging, mostly due to spot-on casting. Cleveland’s pauses between dialogue suggest that while Elwood’s brain may have already softened from liquor, he still takes a keen interest in what his fellow humans have to say. As sister Veta, Orr is a lacy, delightful whirlwind of comic frustration and indecision. Crew seems magically lifted from a 1940s film comedy and deposited in the flesh onstage, so thoroughly does he inhabit his slang-spouting, blue-collar goombah of a hospital bouncer. Harvey sometimes feels hobbled by time and imitation, but Elwood P. Dowd probably wouldn’t think that was a bad thing. As he famously advises another character, it’s better to be pleasant than smart.