The Federal Bureau of Prisons seldom loses when a prisoner’s family tries to take it to court to right some wrong. Two weeks ago it did.


In response to a negligent death lawsuit filed in 2005 by the family of Linda Fenton, a former prisoner in the Federal Medical Center-Carswell’s psychiatric unit, Justice Department lawyers issued a request early this year for a summary judgment in favor of the bureau. On August 17, United States District Judge Terry Means of the Northern District of Texas denied the request. Now the case can go forward to trial and possibly breach the heretofore impenetrable bureaucratic wall that has kept Carswell’s dismal record of medical negligence documented by this newspaper over the past decade from widespread public scrutiny. 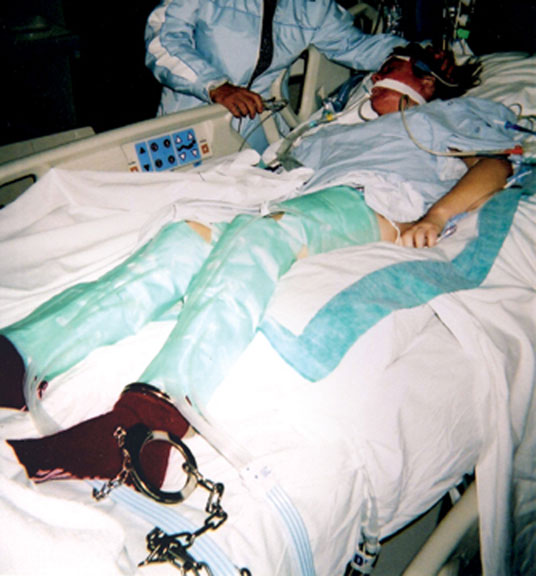 Fenton died from injuries she suffered as a prisoner there in 2004. The injuries – either inflicted in a suicide attempt, as the prison contends, or by others, as the family believes – occurred two days before she was scheduled to be released after serving seven years for possession of methamphetamines. She was 34. The family’s suit charges that negligence, failure to follow the bureau’s own protocols, and/or a deliberate act of violence against Fenton by one or more members of the Carswell staff caused her death.

The facility on Fort Worth’s western edge is now the only medical and psychiatric hospital in the country for women convicted of federal crimes.

Fenton served her time there because she suffered from Tourette’s syndrome, a brain disorder that causes uncontrollable and often violent outbursts. She developed Tourette’s after sustaining brain injuries in a car accident when she was 12. She spent the rest of her life in and out of mental hospitals or prison. “The facts in this case are hotly contested, but no one would dispute that Linda Fenton was troubled,” Means writes.

Fenton, he says, “routinely acted out and would exhibit suicidal tendencies, including … tying things around her neck in an attempt to hang or suffocate herself.” Her caretakers believed that the suicide threats were manipulative, conducted “in order to get her way.” She was nonetheless placed on suicide watch 18 times from April 1999 through September 2003, according to Means – but inexplicably not on the day that counted.

She died at an off-site hospital eight days after she was found unconscious in a cell in Carswell’s “psychiatric seclusion unit.” She never regained consciousness, yet she remained shackled to her bed “as if she was going to escape,” her distraught brother, Paul D’Antuono, said bitterly (“Cancer Cell,” Aug. 24, 2005; “Hospital of Horrors,” Oct. 19, 2005).

Court records show that she was sent to the seclusion unit as punishment following a serious outburst on February 23, 2004. She was about to be released from the place that she had often described in letters as worse than hell, rife with what she claimed were sexual and physical abuses against the inmates by the psychiatric staff – conditions that she threatened to expose when she got out.

“Linda was upbeat, not at all suicidal, anxious to go home,” said an inmate friend, Dana Corum. D’Antuono believes the worst: that his sister was killed to silence her and that an elaborate cover-up was concocted to protect the prison personnel involved.

There is no argument that the circumstances surrounding her death are murky. Calling Means’ order a vindication of the family’s long struggle to keep the case alive, the Fenton siblings’ attorney, Todd Duncan of Hurst, said, “Obviously, the judge believes there may be legitimate questions of negligence here and some conflicting issues of fact that deserve to be heard” in a full court proceeding.

The events leading to her death seem to have begun with a couple of innocent requests. Her friends asked permission to throw a going-away party for her in the prison recreation room. Fenton asked permission to shave her legs for the party because, as a patient in the psychiatric unit, she didn’t have access to razors. Both requests were denied by her psychiatrist, William Pederson, without explanation. At that point, according to a staff reports, Fenton “lost it.” She became extremely agitated and combative and was put in the seclusion cell as punishment. She then asked to speak to an officer she trusted. That request was also denied.

At 11:21 a.m., according to on-duty officer Joe Reamy and seclusion unit nurse Deborah Castner, Fenton threatened to “tie something around her neck, covered her window with toilet paper, and refused to speak further to anyone.”

At that moment, with her history of suicide threats and by the bureau’s own policy, Fenton should have been put on suicide watch, according to two doctors who once worked in the federal prison system. That she wasn’t is a violation of the bureau’s policy stating that any inmate threatening self-harm must be placed in a special “suicide watch room” (a Plexiglas cage, in effect), be given only paper clothing and paper blankets, and be kept under 24-hour observation. The person watching her “will have verbal communication with and constant observation of the suicidal inmate at all times.” (BOP’s emphasis.) The policy also states that if an inmate does commit suicide, the place where she is found must be preserved as a crime scene. None of that was done in Fenton’s case. (Even her clothes, which could have provided evidence, disappeared, and her family’s request that she be examined for signs of sexual abuse was refused by Carswell.)

At 11:25 a.m., according to Reamy, when no one could get Fenton to respond and she could not be seen in her cell, Castner was told to open the cell door.

It had been only four minutes since Reamy and Castner said they had heard her voice, yet Fenton was already near death. Means writes that she was found “lying at an angle on the bed with her head down between the wall and the mattress. … a strip of sheet wrapped tightly around her neck and her face … a dark shade of blue.” The sheet was knotted so tightly that it had to be cut off by the first responders.

Enter: the “hotly contested facts” referred to by Means. When her family was notified of her injuries, prison officials told them that Fenton had become suicidal early on February 23 and had been put on suicide watch. That statement is now proven to be a lie.

The judge’s order notes other conflicts: “The timing of when the cell door was opened, when the code blue was called, and when the ambulance arrived is disputed, and the [bureau’s stipulated] evidence from the staff on hand at the time of the suicide is conflicting.”

The most damning evidence was presented by Dr. Roger Guthrie of Hurst, then a four-year employee of Carswell and the first doctor to respond to the code blue call. As the official recorder of the incident, he took notes that show that he arrived at 11 a.m., yet Reamy and Castner both stipulated that Fenton spoke to them at 11:21 a.m. and was not found unconscious until 11:25.

In a complaint to the Carswell medical director written the next day, Guthrie charged that as soon as Fenton was taken from the prison, he was asked by two prison officers to change the “times of record and response” recorded in his medical report: “I was asked by [the officers] to change the time that I arrived on the scene from 11 [a.m.] to 11:30,” he wrote. He refused. Guthrie believes he was asked to falsify his report to make it appear that he arrived on the scene only shortly before outside paramedics showed up. However, the paramedics didn’t arrive until long after he reached Fenton’s room, he said. Guthrie found out later that the emergency ambulance personnel weren’t called until 40 minutes after he was notified.

The Tarrant County Medical Examiner’s autopsy report is also in conflict with the prison’s official report. Two county pathologists who performed the autopsy wrote that Fenton had probably been “unconscious and in respiratory distress for half an hour to 45 minutes” before anyone attempted resuscitating her, rather than the four minutes that Reamy and Castner stipulated.

The pathologists also were told by prison officials that Fenton was found “hanging by a bed sheet” in her cell.  Yet a prison social worker told the family that there was nothing in the near-bare cell from which to hang a sheet.

Guthrie was later fired “on trumped-up charges,” he said. “My real crime was not changing the time that I was called to Fenton’s cell.” Guthrie believes that the prison is trying to cover up the facts because of its negligence in not protecting her, given her history of suicide threats and her erratic behavior that morning.  “There is no question that she should have been on suicide watch,” he said. “If she had been, she might still be alive today.”

Dr. Jim Womack, now in private practice in Fort Worth, is a former federal prison psychiatrist who also believes the prison was negligent. “Fenton’s past actions during her confinement and her specific behavior on February 23 indicated that the Carswell staff should have put Fenton on suicide watch, which would have prevented [her] suicide,” the psychiatrist wrote in a report submitted to the court on behalf of Fenton’s family.

Means accepted Womack’s report over the objections of the bureau, citing that the report rightly goes to the heart of the family’s case, “attacking standards of safety within Carswell and the alleged breach of internal operating and safety procedures.”

Florida pathologist Brian McCarthy performed a second autopsy at the request of her family, and his findings support D’Antuono’s belief that his sister was the victim of a violent attack. McCarthy found that the bruises on her neck were “consistent with injuries from a chokehold and that her 102-pound body showed “a pattern of bruises” on her arms, neck, and wrists that were “consistent with the effects of a physical struggle.” Fenton did not commit suicide, he wrote, concluding that she was killed either deliberately or accidentally from a chokehold that went wrong and that she fought her attacker.

Wherever the truth ultimately lies in this tragic tale, Means’ order brings the family of Linda Fenton one step closer to knowing what happened on that fateful day, a day that started out with a young woman’s simple desire to look pretty for a party.