I’ve never been a huge fan of Mike Judge’s movies. The satirist got his start on TV with Beavis and Butt-Head and of course has spent the last 12 years providing the voice of Hank Hill on King of the Hill. His sporadic output as a filmmaker has nevertheless developed a loyal cult following, one that doesn’t include me. I don’t think Idiocracy is a lost masterpiece, and I don’t think Office Space is one of the great comedies of our time, even though it made me laugh a fair bit. Now comes his third comedy, Extract, and the good news is, it also made me laugh a fair bit. If all you Office Space devotees want to take that as a sign that he’s produced another winner, feel free.


The main character is Joel Reynolds (Jason Bateman), the founder and owner of a prosperous company that produces and bottles flavor extracts for sale in supermarkets. He’s ready to sell the plant off to General Mills and retire when a Rube Goldberg-like chain of workplace accidents leaves one of his employees, Step (Clifton Collins Jr.), without a testicle. The deal is jeopardized by the legal fallout and by Joel’s employees after they hear about the deal and begin fearing for their jobs. 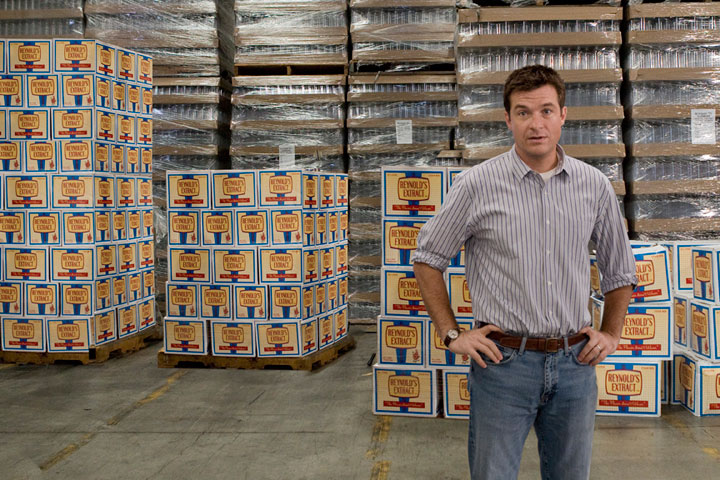 Whereas Office Space showed what kind of hell it is to have idiots as co-workers or bosses, this movie shows that it’s not much fun supervising the idiots, either. With the exception of Step, the workers on the factory floor — Latinos of questionable legal status, a wannabe rock musician who’s in five bands (T.J. Miller), and a passive-aggressive middle-aged woman (Beth Grant) who folds her arms and refuses to do her job when she sees other people not doing theirs — are all kinds of unmotivated. These subsidiary comic roles aren’t as sharply drawn or as funny as the ones in Office Space, and the only actor who pops here is KISS rocker Gene Simmons, who’s cast very effectively as Step’s blustery lowlife of a personal-injury lawyer. Reacting to all these malcontents, Bateman works the same exasperated vibe that he did on Arrested Development, but Joel’s supposed to rediscover the meaning and dignity in his unglamorous occupation, and neither the actor nor the filmmaker can quite put that over. The whole work aspect of the movie is mishandled.

Fortunately, that’s only half the movie. The much funnier other half is about Joel’s home life, where the sex has gone out of his marriage to a telecommuting graphic designer named Suzie (Kristen Wiig). Frustrated, he contemplates an affair when the factory’s hot new temp worker Cindy (Mila Kunis) starts flirting heavily with him, though he doesn’t know that she’s a con artist on the lam who’s gravitating to him because he’s the nearest guy with money. At the suggestion of his bartending friend Dean (Ben Affleck), Joel hires a brain-dead male prostitute named Brad (Dustin Milligan) to seduce Suzie so that he can indulge his own adultery without guilt, but when Brad actually succeeds, Joel is too upset to follow through on his end.

The way it plays out, I spent more than half the movie expecting to find out that the moronic Brad had gone to the wrong house and had sex with someone else’s wife entirely. That’s not the case, and it’s a bit of sloppiness from a film that doesn’t mean to mislead you on this point. That aside, Joel’s dissatisfaction with his life feels very real, and though the havoc in his marriage is expressed as farce here, the issues underlying it are treated seriously. In his tortuous fantasies, Joel imagines Suzie as some sex-crazed desperate housewife ravishing the pool boy, but in reality, we see that Suzie cheats on Joel because her self-esteem is at a low ebb and because Joel is as bad a communicator at home as he is at work. (In fact, he’s a pretty crappy husband, truth be told.)

The laughs come from all sides in this part of the movie. David Koechner practically yawns out his lines as the Reynolds’ lethally dull neighbor, and Wiig gets one spectacular scene near the end when she finally cracks and tells the guy how boring he is. (This Saturday Night Live star has never gotten her due in movies, though I have high hopes for her part in the upcoming Whip It.) With stringy hair and a full beard, Affleck nicely soft-pedals his role as a guy who’s a fount of bad ideas, preventing the character from becoming a caricature. On the other hand, Matt Schulze injects some redneck glee into the part of Dean’s pot-dealer friend who’s way too enthusiastic about his product. The dealer pretty much forces Joel to smoke from a bong that’s at least six feet long, and in the resulting scene Judge even finds a funny new way to convey that a character is stoned. With bits like that, Extract brings a sweet note to what is usually the blandest moviegoing weekend of the year.