The deceptively advertised Sandra Bullock-starring romantic comedy All About Steve has had its release date delayed more than once, but now seems like a good time to put it out, what with its leading man, Bradley Cooper, having received a merited career boost from The Hangover. (As a bonus, Ken Jeong from that movie also pops up in this one in a prominent supporting role.) There’s one small flaw in that logic, though: When a movie is this awful, there’s never a good time to release it. 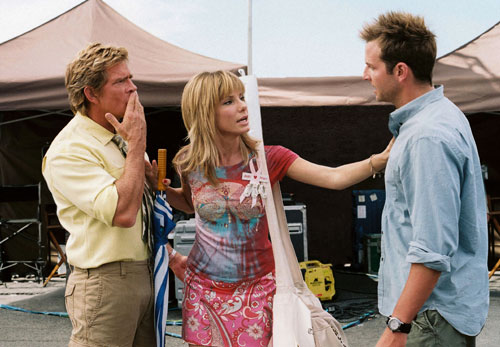 Bullock plays Mary Horowitz, a woman who lives with her parents in Sacramento and works as a crossword puzzle creator for the local newspaper because it’s the only thing she’s any good at. She’s meant to be lovably eccentric, but she lands well on the far side of seeming to have a personality disorder. Incapable of remaining quiet for any length of time, she talks like one of those people in the Bing.com TV commercials who represent indiscriminate Internet search engines, spewing random trivia about every subject that comes up. More annoying behavior is to follow when her parents set her up on a blind date with Steve (Cooper), a cameraman for a TV news network. After spending all of 10 minutes with him – half of them trying to have sex with him – she decides that he’s her soul mate and promptly loses her job after submitting a crossword to the paper composed entirely of Steve-related clues. Unencumbered, Mary then starts following him in crazed fashion all around the country as he goes from assignment to assignment, encouraged by the dirtbag TV reporter (Thomas Haden Church, stealing a few meager laughs) whom Steve works with.

This film won’t satisfy anyone looking for a traditional romantic comedy, as Steve rather sensibly takes fright and spends the rest of the movie trying to get away from Mary. It’s hard to tell what this movie is, really, since in the latter half it veers away from its relationship story and launches into some satire on the mainstream media’s blanket coverage of disasters and scandals. God knows this is worth doing, and yet Kim Barker’s script somehow contrives to miss this huge target, turning preachy and sour in its disdain toward cynical journalists.

All About Steve is so radically misconceived that it’s hard to imagine how it could have been saved. It might have had a chance if director Phil Traill had played this as more of a cartoon or if the filmmakers had gone way darker with its conception of the main character (think: Observe and Report) or if the leading lady had been younger. Indeed, Mary’s antics befit a 12-year-old, and probably no fortysomething actress would have looked good in the role. Bullock’s manic performance, however, surely ranks as the worst of her career and helps this unmitigated failure of a movie make her previous romantic comedy, The Proposal, look like a towering masterpiece by comparison.