When Luke Wade sits down to write a song, he often starts with nothing more than a melody. A cappella, he can concentrate on a simple vision, a concise emotion. The music comes later.


Through seven years of writing and gigging with his popular, former band, Hurt Street, Wade learned a lot about what he wanted from music. With his new band, No Civilians, the 26-year-old Fort Worthian has evolved into the purpose-driven songwriter he has been waiting to become. In a matter of months, he managed to assemble a super-group of players to support his mature, personable voice. With a debut solo album on the horizon, things have never been more in focus for him. 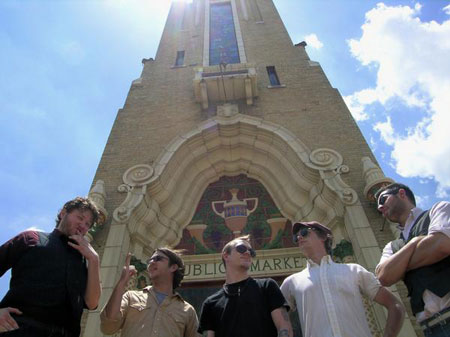 As a teenager in Stephenville, Wade saw the guitar as “a tool to help me say what I had to say.” While in college at nearby Tarleton State, he started Hurt Street, in which he waxed poetic about women and their tortuous ways.

By 22, Wade was traveling all over Texas, playing around 90 shows a year with his band. He was young, unworried about making money, and copacetic with the enthusiastic, jam-bandish music that Hurt Street was delivering. But now that he’s 26 and scraping by as a full-time musician, he has upped his standards about both life and music.

The encumbrances of adult life eventually led Hurt Street to disband last October. Meanwhile Wade discovered powerful new influences in Americana singer-songwriters Ray LaMontagne, Jay Buchanan, and John Mayer – especially Mayer’s album Continuum. From these writers, Wade learned several important musical tenets. “You can say whatever you want as long as you sell it right and sing it right,” he said. “I also found the empty space in music to be a sexy thing.”

With no band and a renewed outlook about what he wanted to create, Wade began recruiting instrumentalists to add input to his tunes. He tried to make a solo record on four separate occasions, eventually scrapping each attempt because he didn’t dig the overall vibes. Two months ago, he and a producer friend, guitarist Nick Choate, handpicked local players and invited them to Choate’s Blue Smoke Studios on the East Side to work on the album, tentatively titled Tomorrow’s Ghosts. With drummer Blaine Crews (The Campaign), keyboardist Justin Pate (The Orbans, Pablo and the Hemphill 7), bassist Scott Lee (Sam Anderson, Becky Middleton), and Choate on electric leads, Wade finally found the combination that he felt could understand the simple, tasteful way he wanted to make music.

Everyone else apparently felt the chemistry too. They decided not only to help with the record but also to form No Civilians. Wade “loosely” guides what he wants the guys to play, but he also trusts their musical capabilities. So far, so good. “They did their parts better than I ever could have imagined,” he said. “They are good at serving the song and what it needs … that takes creative players.”

Wade bases his songs around his acoustic guitar, which almost always leads to a funk-oriented groove. Space, however, is what he craves, and No Civilians complies. Crews’ drumming keeps a steady pace without any distracting fills or showboating. “The genius of Justin Pate,” as Wade likes to refer to his keyboardist, uses big, swelling sounds rather than finger-piddling to bolster the music. Choate chooses tastefully sparse parts for the guitar, and, all together, the band uses its skill to gently point toward Wade’s words.

Although he ultimately aims to be uplifting, Wade is unafraid to touch upon the less-than-sunny side of life. If he weren’t telling the whole story – heartbreak and all –  he wouldn’t be telling the whole truth. “When you take the honesty out of the music,” he said, “it’s like you are stealing from the listener.” His music, he said, “isn’t meant to tear you down. It should help you to really feel and deal with your emotions in a way that is comforting.

“I am lucky to be able to love and be a part of people’s lives,” Wade continued. He is indeed sharing his life and relationships through his music, and this honesty is what he wants to define him as a songwriter. “If I write a song, it can’t be about an ordinary thing,” he said. “I have to really feel it … and maybe I can help you to feel your emotions in a way you couldn’t all by yourself.”

Luke Wade and No Civilians

Friday on the Green, Fri at Magnolia Green Park (Lipscomb between Rosedale and Magnolia on the South Side). 7pm. Free.