A well-earned tip of the hat to Tarrant County Medical Examiner Nizam Peerwani, whose long-awaited decision on the April 18 cause of death of 24-year-old Michael Patrick Jacobs Jr. – who died shortly after being jolted twice with a Taser fired by a Fort Worth police officer – was finally released last week. In the bombshell press release, Peerwani says Jacobs suffered “sudden death during neuromuscular incapacitation due to application of a conducted energy device.” Peerwani ruled the death a homicide. 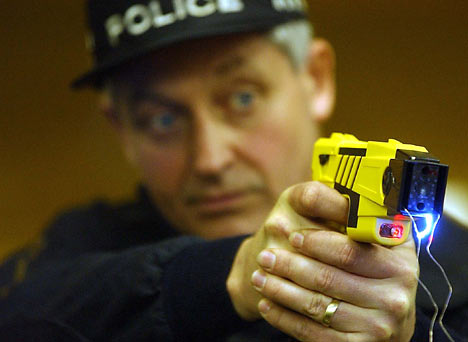 No medical examiner in the United States has gone as far as Peerwani has with that simple line. Other M.E.s have listed other causes of death as the results of electrocution, but no M.E. has named the Taser weapon as a vehicle for homicide.

Jacobs’ parents had called the police on their son, who suffered from schizophrenia and bipolar disorder. He was causing a disturbance and was hit with a 49-second blast from the Taser of FWPD Cpl. Stephanie A. Phillips after refusing to comply with orders to get into a police car. The initial jolt was followed by a five-second jolt after a one-second respite. In a story in the Fort Worth Star-Telegram, Phillips said she did not realize how long she had held the trigger down during the initial jolt.

Peerwani will likely take some heat from Taser International over his findings. The company, armed with tons of lawyers, is notorious for intimidating M.E.s for suggesting that Taser weaponry played even peripheral roles in police-custody deaths.

No matter how much coverage we give to the Barnett Shale, there’s always more to write about in a day or two. The day we went to press with our last Barnett story (“The Big Takeover,” Aug. 26, 2009), a piece that dealt largely with the Texas Commission on Environmental Quality‘s new camera that can film hydrocarbons escaping from gas wells, Gov. Rick Perry appointed Brian Shaw, Ph.D., to head the TCEQ. Shaw, a member of the three-person TCEQ commission since 2007, is notable in that he denies that humans are at all responsible for climate change. No doubt he will scrap the camera. Who wants to see all of that depressing footage of invisible poisons filling our air anyway?

On the same day, Aug. 25, the federal Environmental Protection Agency released a report concerning the poisoning of an aquifer in Wyoming by gas drilling. The report noted in part that, “Many activities in gas well drilling, [including] hydraulic fracturing [or “fraccing”] … involve injecting water and other fluids into the well and have the potential to create cross-contamination of aquifers.”

That report came out at nearly the exact time that Texas Sharon wrote on her blog (http://txsharon.blogspot.com/) about the Diamond Oaks municipal water well in Parker County in the Paluxy aquifer. The well is being taken out of service because of the sudden appearance of radium 226, radium 228, and alpha radiation in the aquifer. The well, by chance, lies within a quarter-mile of two dry holes and three working gas wells drilled by Devon Energy in 2007 and 2008.

Static doesn’t think you’re getting enough of that mailbox money to have to put up with all of this.