I can’t remember the last time an Academy Award-winning screenwriter followed up her Oscar victory with a cheap horror flick. That indeed describes Jennifer’s Body, the second screenwriting effort from Diablo Cody. Where her previous movie Juno was heartwarming and romantic, this witty dark comedy is massively sick and twisted. I love it to distraction.

Our heroine is Anita “Needy” Lesnicki (Amanda Seyfried), a mousy virginal high-schooler in a tiny Minnesota town. She’s overshadowed by her promiscuous, insanely hot best friend Jennifer (Megan Fox), yet their friendship from childhood days persists. That changes after Jennifer ditches Needy to ride in a van with a bunch of cute guys from out of town. This leads to the flat-out scariest scene in any horror movie this year, as Jennifer reappears in Needy’s kitchen, covered in blood and flashing a maniacal bloody grin. 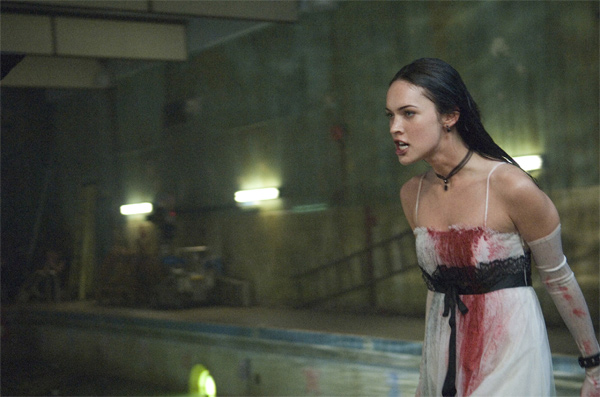 Needy eventually figures out that Jennifer has been turned into a flesh-eating succubus who’s preying on the boys at school, also noting that Jennifer’s hair looks totally awesome after she’s just eaten someone. The movie hinges on their relationship, but it never quite figures out what that is. Is this a story about two lifelong friends falling out? Is this a lesbian romance gone bad? (In the much-hyped kissing scene between the girls, Needy seems to be harboring some seriously repressed urges.) Is the new Jennifer a stand-in for Needy’s sexual hang-ups, or does she represent Needy’s murderous id unleashed upon the world? The film indicates all of these at different points; it would have been better off settling on one.

Fortunately, the brittle, dewy-eyed Seyfried not only anchors the movie but sets the screen ablaze from our first glimpse of her as a violent, screaming mental patient. (Her co-star is basically here as a selling point, though the predatory role makes good use of Fox’s limited capabilities.) The role gives her lots to play with, and she’s incandescent whether she’s expressing concern for Jennifer, flaring up with lesbian lust, or howling with grief over the corpse of someone close to her. By the end, with the unfiltered rage that she carries into the final showdown, Seyfried is hardly recognizable as the songbird from Mamma Mia!

The shortcomings in Cody’s script are more than offset by her keen observations of small-town life (check Needy’s distinction of the local bar from a nightclub) and her pop-culture references that give this movie a hipness that most horror flicks don’t have. Cody also pulls off some difficult Heathers-like satire after several townspeople burn to death in said bar. The film bristles with comic invention, especially midway through when the bad guys are revealed as pretentious hipster rock musicians dabbling in Satan worship to further their careers. (“Do you have any idea how hard it is to make it as an indie rock band? There are so many of us, and we’re all so cute!”)

Director Karyn Kusama stages piquant visual gags to go with the ones in the script, and the film is full of neat little touches like the tears-of-blood spatter on Needy’s face at the end. The director also manages a deflowering scene between Needy and her boyfriend (Johnny Simmons) that’s hilarious, realistically awkward, and supernaturally terrifying all at the same time. Together, these filmmakers make Jennifer’s Body into the funniest horror movie since Shaun of the Dead and one with a female flavor of its own. Let’s see the upcoming Twilight movie match that.