Most of us who go to local shows probably spend a lot of time paying polite attention, maybe nodding along to the beat a little. Rarely do we have an experience. But a couple of years ago at a show at Lola’s Saloon-Sixth, I was transported. I had gone to see the headliner but got there in time for the opening act. Without any warning, a crowd of what seemed like 20 people came on stage, including a petite fiddle player, a guy wearing a marching bass drum, and a wiry, ZZ Top-ishly bearded, balding frontman whose acoustic guitar seemed as big as the stage.


The music came on all bombast and brightness, with the frontman shouting down the microphone like a drill sergeant and the bass-drum player pounding away like his life depended on it, emphasizing points — and indeed many points were emphasized. I don’t remember the specifics of the song or songs. What I do recall is feeling as if I had been overtaken by pure sound. Not volume. Sound. 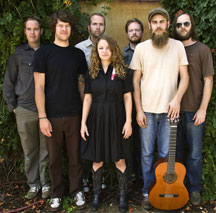 The band was Telegraph Canyon, a Fort Worth septet that recently released its sophomore album, The Tide and The Current, produced by Will Johnson, frontman for both Centro-matic and South San Gabriel. Much has changed since that Lola’s show. For one thing, Telegraph Canyon doesn’t open for other local or regional bands anymore, just the occasional marquee touring act. For another thing, the band doesn’t have to overpower listeners to impress them, to give them an experience. Telegraph Canyon just has to play.

The album’s arrival is a momentous occasion, not only for the band but for Fort Worth. National trendsetters have been sniffing around here lately. Two other bands that call Fort Worth home, Bosque Brown and The Theater Fire, recently released albums that were reviewed — warmly — by Pitchfork Media, the indie tastemaker of all indie tastemakers. We all know about The Burning Hotels and Bandslam. And we also know about the appearance of Calhoun’s “When the Earth Has Lost Its Hold” on the NBC dramedy Chuck. Most recently, Telegraph (as the group is often called) was recognized as one of three new bands to watch by Rolling Stone magazine. “Sprawling Fort Worth septet writes alarming small songs, ornamented with accordion and violin,” the mag says, “quiet little alt-country numbers that work their way toward irresistible choruses.” If something’s happening here, you can bet, Telegraph Canyon will be leading the charge.

One of the band’s many selling points is young frontman Chris Johnson’s nervous, evocative tenor, an instrument that’s brassy in the higher registers and dusty in the lowers. He never overuses it or wrings it for pathos, though he occasionally amps up the twang. Johnson simply sings the songs as if they could be sung no other way. Always quavering in the back of his throat is a kind of woe, a fear of inflicting or receiving pain. His pipes bring to mind Freedy Johnson and Neil Young, two vocalists with reedy, lighter-than-air voices.

What Johnson’s singing about is mostly epic. No petty why-don’t-you-love-me or you-broke-my-heart songs here. Johnson and company meet the grand themes — life, death, isolation, abandonment, universality itself — with sweeping instrumentation that incorporates violin, banjo, organ, piano, mandolin, accordion, vibes, and pedal steel in addition to the requisite guitars, bass, and drums. One of The Tide and The Current‘s most ambitious tracks is “A Light in the Field.” A small, echoing piano figure that calls to mind some lost ’80s-era baroque-pop dance hit shimmers above the twitchy acoustic strumming that introduces the song. “The force and the fire / The fight and the frenzy,” Johnson sings, his voice hushed, breathy, and agitated. “We’ll replay the night / For the glad and the grieving.” A pause. “If everyone is tired,” Johnson continues, his voice now loud and assertive yet still somehow contemplative and inwardly drawn, “but everything’s alive, oh, oh-oh / We’ll replay the night / You can relive the time.” Something happened the night or day before, the song says, something that’s worth reliving for better or worse. But by the ache in Johnson’s voice — and by the melancholy ramble of the rest of the song — that something is lost forever.

Loss is a recurring theme. Sometimes it’s a blow. Other times, a boon. On “Shake Your Fist,” perhaps the band’s most vintage-Springsteenian song, Johnson croons lightly, “Turning pages, oh, you grew / Testifying nothing but the truth / Walking in your righteousness / Shake ’em like you shake your fist / I loved you for getting more / Left you when the night was warm.” He doesn’t sound too heartbroken over the dissolution of what was clearly a friendship. He might even be glad.

Though the instrumentation is sparse, the arrangements are diverse enough to keep monotony at bay. (The choruses that erupt in both “Dressed in Fight” and “A Light in the Field,” however, share the same kinds of smashing cymbals, rumbling drums, and highs and lows.) All 10 tracks quote some predecessor or the other: Iron & Wine, R.E.M., The Boss. But none ever devolves into pastiche or slavish homage. They never seem to sound anything less than Telegraph Canyon-y, erected carefully on solid foundations of acoustic rhythm guitar, drummer Austin Green’s inventive beats (sometimes he marches, sometimes he cudgels like a caveman), and fiddle, accordion, or piano flourishes that exist chiefly to respond to Johnson’s calls. The album is lean but dense. Hints of all of the permutations of roots music from the latter half of the 20th century are gracefully, neatly packed into the album’s 30-minutes-plus running length. Effortlessly, the band ambles from bubbly Talking Heads-inflected radio-rock (“Quiet Assurance”) to classic French torch song (“Welcome to the Night”). One of the most rocking waltzes you may have ever heard is “Safe on the Outside,” a one-way conversation between Johnson and a fine feathered friend. “Sparrow, so tired / Rest here for the time,” the frontman sings over a swaying rhythm, “I won’t keep you / But you can’t try until your wings are dry / No destination among those in the service of the tide / Soon you will be home again / Safe on the outside.” “No destination among those in service of the tide”: a great lyric, one that’s probably aimed not at an animal but a wayward loved one, subject as people like him are to the heartless whims of nature.

Most of the songs have a hopefulness that leavens the overarching, majestic gloom. The sad accordion that wheezes a few memorable notes in select portions of “Welcome to the Night” hints at daybreak, perhaps because the accordion itself is such a jovial, almost comedic instrument. At moments, “Quiet Assurance” sheds its serious timbre for a funky, bluesy breakdown. “Captain” pivots on an acoustic chord progression that dips and rises in high, traditional C&W style, and on “Reels and Wires,” the album closer, two notes — on acoustic guitar and banjo — bounce back and forth, giving a little bluegrass kick to what’s perhaps the most somber track. “Holding the reels and the wires,” Johnson sings, his voice as desperate as ever, “Scared of all the giving this time / The water’s washing over you / The reasons rewind / The reasons behind / The truth … Will they come back for you now? Will they come back for you now?”

The album opens with a soft, stuttering piano over which Johnson — his voice cloudy, as if it’s being transmitted from a sepia-toned past — sings, “You’re nobody until you’re breathing / You’re nobody until you’re dead.” Metal screeches in the deep background. The album ends on an intense series of a cappella oooooh‘s — are they mournful? are they hopeful? — pointing up one of The Tide and The Current‘s best qualities, its artful ambiguousness. The average listener might have to spin the record a couple of times to really absorb the subtleties that add up to the heart-wrenching, life-affirming, mind-melting whole. The current will overtake you, rest assured, but at its own pace.