George W. Bush is out of office. Healthcare reform is on track to be enacted. So what do you do if you’re Michael Moore? You take on the whole gosh-darned system, as we can see in his latest essay film, Capitalism: A Love Story. Don’t be fooled by the subtitle. There’s very little love here. 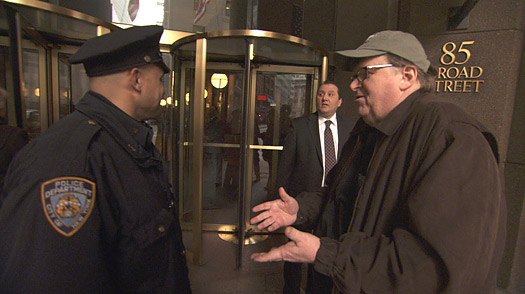 The first half of the film finds Moore following his tried-and-true formula of beginning with the stories of ordinary Americans falling into misfortune, then widening out to show us the larger picture. Behind the factory workers thrown out of work and farmers kicked off their farms, Moore discovers all sorts of unsavory business practices. In one particularly heinous example, Wal-Mart and other corporations secretly take out life insurance policies on their employees and then cash in when they die, while the deceased employees’ families never see a cent. (The practice is known in the trade as “dead peasant insurance.” Yeesh.)

Appalling as these anecdotes are, they don’t really prove Moore’s thesis that capitalism is broken beyond repair. They illustrate that some people and entities will always try to game the system, whatever it is. Moore yanks at our heartstrings with tight shots of the emotionally roiled faces of people who’ve lost their jobs and houses. Unlike in his previous film Sicko, however, he fails to tie their suffering to the system’s ills, so it feels creepy and exploitive.

Another problem is that Moore’s target is too big. It’s one thing to say the system has failed large numbers of people, and another to say what should be installed in its place. Moore seems to think the economies of Europe and Japan are fairer toward working men and women, but if he looked a bit closer at those countries, he might rethink that. The filmmaker’s social critiques are usually accompanied by killing humor, but Moore’s comic touch deserts him here.

His movie picks up steam only in the second half, when Moore narrows his focus onto the recent housing and financial crisis, depicting it in easily understandable terms. He effectively blasts predatory lenders and mortgage brokers. He finds economic experts unable to explain precisely what a stock derivative is. He details the toxic grip that big business has been gaining on government regulators over the last 30 years, regardless of the party in charge. He even trains fire on congressional Democrats for not standing up to the likes of Goldman Sachs during the recent round of corporate bailouts. Then, just as we start to feel helpless about all this, he shows workers organizing to take back their jobs, businesses, and homes. The movie builds to a sweeping upbeat ending that includes a trademark rhetorical flourish from Moore: “I refuse to live in a country that treats its citizens this way, and I’m not leaving.”

Just like his conservative counterparts, Moore is tapping into the anger that many working Americans feel toward heartless corporations and the government. The filmmaker’s calls to social action are probably more constructive than Glenn Beck’s, but he’s not any closer to figuring out how our system can change so that people feel like it’s working on their behalf. That disconnect poses the biggest political challenge of our time, and it’s also why, for all its shortcomings, Capitalism: A Love Story is a useful snapshot of our time.