Writer-director Oren Peli’s Paranormal Activity has been labeled “the next Blair Witch Project” – meaning, essentially, horror’s new runaway phenomenon – and judging from audience reactions at one of the first screenings in the country, that doesn’t seem far off.


Here’s the thing: People at the movie were actually scared. They screamed. They were freaked out, and it was actually fun to hear people talking on the way out about how much the movie had gotten to them. Some giggled nervously, some tried to cover it up, some shook their heads as if they were trying to un-see it. For all the controversy over the changed-by-Steven Spielberg climax, I have to say it freaked me out too. 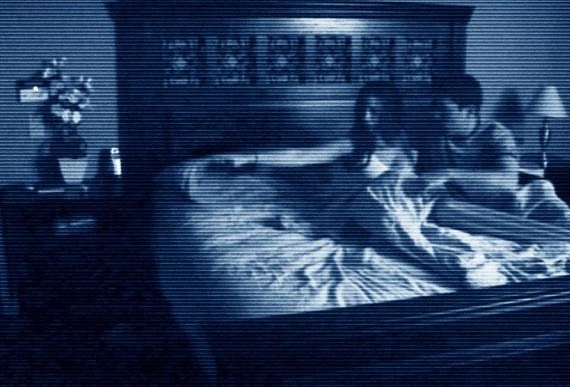 Without spoiling anything, I’ll say that personally I wasn’t all that comfortable walking into the night knowing the implications of the ending. (Interestingly, the other two endings that were considered hit a very different – shall we say very final – note.)

There are some important differences between Paranormal Activity and Blair Witch Project that I think will help the former in the long run. There are similarities, sure. Peli made his movie for $15,000, and the plot is the most you can expect anybody to get out of $15,000. It centers on a young couple, played by Katie Featherston and Micah Sloat using their real names (in what seems like an homage to Blair Witch), believing something disturbing is going on in their house. Micah buys a handheld camera to try to capture it on film, recording day and night. This leads to the movie’s biggest flaw, one that’s also a weakness in Blair Witch, Cloverfield, and almost any other cinéma vérité movie, what I call the Why Am I Picking Up The Camera Right Now Syndrome. It pulls me out of the movie when I have to think, “Wait, would someone really go pick up the camera and film what’s going on if it was really happening?”

However, it also leads to lots of genuinely creepy footage, and Peli’s excellent sense of timing makes this certainly the scariest movie anyone will see this year. He made it in 2007, but it kicked around until Spielberg saw it and supposedly was so scared that he returned the DVD in a garbage bag, saying it was haunted. Now, Dreamworks and Paramount are putting it out, and it’s already made back its production cost more than a dozen times over.

The biggest difference between this movie and Blair Witch is that Paranormal Activity delivers when it counts. Its title is as much a threat as a name, and while the film sometimes uses the name as cover to deliver some unexpected twists, it always lives up to it.