The economic downturn has not been kind to the folks from Indian Casino Records, the plucky little Seattle-based indie record label that we’ve profiled (“South by Northwest,” Feb. 11, 2009) and that has released recordings by local Fort Worth luminaries, including the hard-rockin’ Me-Thinks, the rootsy Barrel Delux, and the uncategorizable Eyes, Wings and Many Other Things. In a recent e-mail, label honcho Jack Bensonhurst said that he had to lay off half of his staff, including the entire A&R division. (Of course, Bensonhurst is the nom de biz of Haltom City expatriate John Frum, former frontman for Hasslehorse. Indian Casino is really his one-man operation – it’s all good-natured B.S.)


The all-too-real lack of cash flow, however, hasn’t prevented Indian Casino from forging ahead with releases — all due in January 2010 — that include a sophomore CD by Frum’s own Seattle-based Transient Songs project and a split 7-inch vinyl single featuring new tuneage from the Me-Thinks and the rockin’ pride of Weatherford, One Fingered Fist. Also on tap is a compilation CD of tracks by artists primarily residing in the 817 entitled The Return of HellDamnCrap. 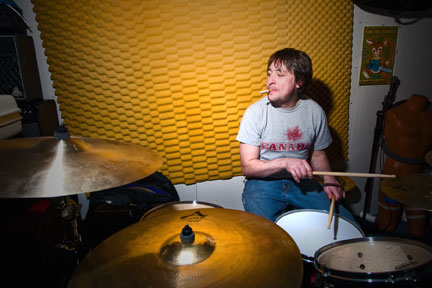 The comp’s title refers to another long-defunct label, one piloted by Mike Bandy, formerly of Dragworms and Tractor Trailer and currently playing guitar in The Me-Thinks and Barrel Delux. Commencing as the ’90s drew to a close, the label released a couple of similar collections but on CD-R (replete with snazzy Pussyhouse Propaganda artwork). The terminal HellDamnCrap compilation was released in 2002 and featured artists of the stature of Eleven Hundred Springs, Vena Cava (the band that evolved into The Theater Fire), and Jasper Stone, alongside the usual Haltom City ne’er-do-wells. The Return will be released “in limited physical form,” Frum said, “and mainly on digital outlets like Rhapsody, eMusic, iTunes, Amazon, and on the Indian Casino web site” (www.indiancasinorecords.com).

The track list will include songs by pretty much the entire Indian Casino roster — The Me-Thinks, Barrel Delux, Shotgun Messiah, Transient Songs, The Pungent Sound — plus some interesting fellow travelers. One is Andy Gassaway, an alias for Frum’s Transient Songs co-conspirator Jimmy Andrews, who played in the Kansas band The Pomonas before relocating to Seattle. Another is Napoleon Complex, a project by reclusive former Me-Thinks drummer-guitarist-songwriter-“spiritual adviser” Will Risinger, who left them not long after the release of their 2007 discs, Make Mine A Double E.P. For The Return, Risinger also collaborated on a track with his Me-Thinks “replacement,” Bandy, under the rubric With Signs Following. “I’m pretty excited about Will contributing,” said Frum.

The Headlights Up is the brainchild of guitarist-singer Cody Yates, who played with Risinger in an outfit called Wizbang before the Me-Thinks assembled. Yates currently performs with a band called Sloan Automatic, who’ll be providing music for a Contemporary Dance Fort Worth performance in the Poultry Barn at Will Rogers Memorial Center in mid-November.

“I wanted to do this because it seemed like everything was getting really fragmented,” said Frum, speaking from his Pacific Northwest studio, dubbed The Snakepit. “This record label’s in the red, but this is all in the name of fun anyway.”

Full disclosure: This writer was a member of the defunct Cowtown improv outfit PFFFFT!, which will also have a track on the compilation.