Famous playwrights don’t offer succinct explanations of their plays very often. Of course, Steve Martin was famous as an absurdist comic star long before he tackled playwriting, so he didn’t have any kind of literary pedigree to uphold when he wrote an open letter last March to the citizens of La Grande, Ore. It was published in the county newspaper. A local high school was preparing to stage his 1993 debut script, Picasso at the Lapin Agile, when parents circulated a petition to halt the production because of “objectionable content,” including characters who loiter in bars and treat women like sex objects.


Martin wrote patiently, “The play attempts to explain, in a lighthearted way, the similarity of the creative processes involved in great leaps of imagination in art and science.” To summarize the show as being merely about barflies and lechers, Martin continued, would be “like calling Hamlet a play about a castle.” Martin graciously offered to fund a modestly budgeted staging somewhere off the high school campus. 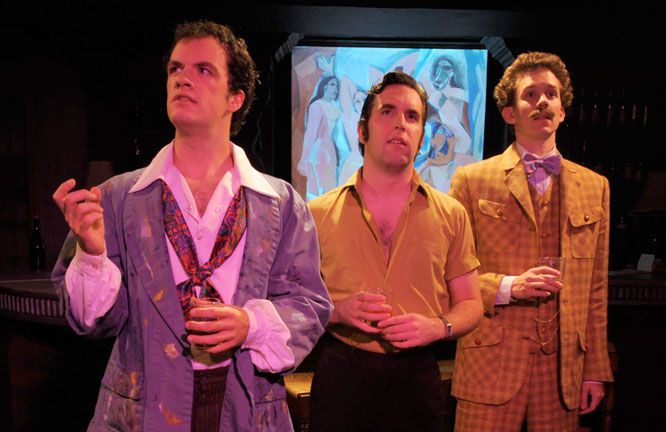 Having seen Circle Theatre’s meringue-light but captivating co-production (with the TCU theater department) of Picasso at the Lapin Agile, I have to say that a.) the script is no Hamlet and b.) that Picasso is indeed about a group of budding Parisian drunks exchanging imaginative, usually quippy, and sometimes lascivious chitchat. But that everyday quality of just-passing-the-time interactions is what lends this show its magnetic buzz.

Director Harry Parker understands that Martin’s fictional 1904 meeting between a 25-year-old Albert Einstein and a 23-year-old Pablo Picasso at a real-life French watering hole earns its appeal from the clumsy but familiar earnestness of the nascent geniuses. The kind of greatness that this German physicist and this Spanish painter would eventually achieve involved reinventing the way people view the ordinary world, so it follows that a pre-famous Albert and Pablo would have to have more than a passing acquaintance with the mundane and the earthy. Plus, there’s nothing more down-home than having drinks with friends while bullshitting about the meaning of art and life at a neighborhood tavern.

Picasso at the Lapin Agile is a smart choice for Circle to co-produce with TCU, because the show kicks up comic sparks when cast with young, baby-faced actors in the roles of historical figures we usually visualize as the wizened sages of their latter years. TCU students Daniel Fredrick (sporting a conspicuous stubby mustache as Einstein) and Andrew Milbourn (modeling a giggle-inducing beret upon his entrance as Picasso) certainly fit the young-turk mold. Each is given to lavishly expounding on his field of expertise at the Lapin Agile, a bohemian pub owned by amateur philosopher Freddy (David Fluitt) and his no-nonsense wife Germaine (TCU professor Jennifer Engler). Other patrons include Gaston (master smart-ass David Coffee), a sexagenarian bachelor with a bottomless appreciation for both wine and the female form; the mercenary art dealer Sagot (Paul Taylor, doling out contempt with great finesse); and Suzanne (TCU student Sydney Baumgart), a Picasso paramour, who gives a hilarious step-by-step account of his seduction methods.

Martin’s play serves up a goulash of themes: the progress of Western civilization, the process of inspiration and creation in art and science, capitalism, sex. It’s long on spice and short on nutritional value. His characters never alight upon any subject long enough to say anything particularly deep. But director Parker’s ensemble comprises highly trained comic athletes fearlessly determined to joust with every non sequitur, pun, and clever insult. There’s a lot of bad predictions about what the new 20th century will bring: Freddy declares that not only will the Wright Brothers invent a delicious low-calorie fudge but also that France will emerge as the dominant military power of Europe. Put-downs are launched and hit their mark: “No pun intended,” one character said smugly, while another replied, “No pun achieved.” And, of course, there’s a lot of saucy humor, as when Germaine asks, “Do you know Picasso?” and Suzanne answers, “Twice.”

Perhaps the most engaging aspect of Circle’s Picasso at the Lapin Agile is watching how lead actors Fredrick as Einstein and Milbourn as Picasso approach their characters. Milbourn plays the randy painter as a kind of heterosexual Latin dandy, given to preening poses, extravagant hand gestures, and dramatic sighs. It’s a gamble that pays off and also proves that of all the human vices, vanity is the most inexhaustible source of satire. Fredrick is more scaled-down and internalized, to the point that you could also see him playing the young Einstein in a drama. He’s no less funny, however. When an actor can trigger laughter with his pauses, you know he’s got impressive comic skills. Their performances complemented each other nicely.

By the time a blue suede-shoed, slick-haired Visitor (Eric Dobbins) enters late to make a point about the unpredictability of genius, you get the feeling Martin had run out of ideas on how to end his free-form comedy. The show spins its wheels for the last 10 minutes or so, but by that time, Circle’s mischievous cast has wooed the audience so effectively that we’re a little sad to watch them take their bows. However spotty the overall script, this mixture of great minds and fragile egos is a potent shot of theater.

Picasso at the Lapin Agile