Frank Whetstine has reinvented something almost as commonplace and universally accepted as the wheel: the plastic guitar pick. The flat, triangular pick favored for decades by folk strummers, country pickers, and rock ‘n’ roll speed players has been re-envisioned as a bizarre facsimile called the Sik Pik.


Whetstine will unveil his creation this weekend at the Arlington Convention Center. “There’s never been a pick like this,” he said. “That’s what the U.S. Patent Office is telling me.” He is using an injection-mold tool to mass produce the picks and will begin selling them this weekend for $3 each or two for $5. That’s about 10 times more than the average flat pick costs, but the Sik Pik is thick and durable and should stand up to years of heavy playing – assuming a guitarist can go that long without losing it. 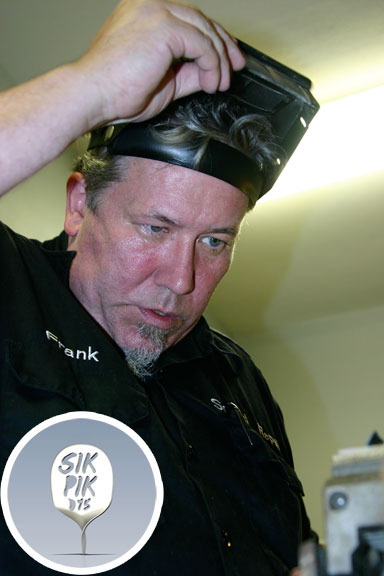 He said the early prototypes of the Sik are drawing rave reviews from a handful of local pickers.

Inspiration came to Whetstine earlier this year while he was working on an amplifier at Sound Repair, a shop he owns in downtown Arlington. Guitarists often hold their flat picks at odd angles to bite into the string more aggressively and find interesting colorings and tonal variations. “A buddy of mine was showing a boutique amp to a couple of customers, and he was talking about how some people will turn their picks, and he was playing like that, and I looked over, and he had his hand cocked at a really weird angle,” Whetstine said.

Suddenly an idea popped into his head. He could heat up a pick, reshape it with a sharper point, and twist the narrow end to create a slight lip that allows a fluid up-down picking style, one requiring a shorter range of motion while getting a bigger bite and better tone on the strings. The Sik Pik name is a play on the twisted appearance of the resulting creation.

Whetstine is currently pursuing distribution deals to put his product in guitar shops across the country. “I’ve got some folks who see it and hold it in their hands and say, ‘Oh god, ever since I’ve had it in my hand, I have gotten rid of all my flat picks and will never use them again,’ ” he said. “And I’ve had folks who pick it up and say, ‘I don’t like it,’ and that’s the end of that. Innovation doesn’t strike everybody the same way.”

He made a few prototypes and gave them to musician friends and was pleased with the reactions. After researching previous patents, Whetstine decided he had developed something unique. But producing the picks would take money, so he approached Bill Silvey, the former owner of Charley’s Guitar Shop in Dallas. They formed a limited liability company and set out to conquer the world — or at least give the world something new to pluck a guitar with.

For decades, guitarists have relied on standard plastic picks to strum their strings and create beautiful tonal qualities. The modern pick was created about 100 years ago, but over the centuries players of stringed instruments have used tortoise shells and many other materials for picks.

None looked like the Sik Pik, however. At first glance, some guitarists just shake their heads and wonder how something so oddly configured would ever work. Eric Dobbins, a professional guitarist based in Lindale, took his guitar to get repaired at Whetstine’s shop several months ago. While he was there, he began fooling around with an early prototype of the Sik Pik.

“I’m always interested in new things that will give me an edge and help my performance,” said the self-professed gear head. “It looked different. I’d never seen anything like it. It’s not as flexible as a regular medium-gauge pick, but once you get used to it, I can’t imagine playing without the thing.”

The design lends itself toward speedy lead playing but is also adaptable for strumming.

“Now it’s all I use,” Dobbins said. “It helps the tone. It really grabs the string. You don’t have to work as hard at it, and you can get more out of your playing.”

Eventually Whetstine plans to seek an endorsement from a name artist. But he’s in no hurry. He figures he’ll let the Sik Pik circulate a while and grab some attention. “Eventually somebody is going to get hold of this, somebody who has a big name and recognition, and they’re going to fall in love with it, and we’re off,” he said. “There’s the face that we can associate with the use of the pick.”

Until then, you can check out Whetstine’s creation at http://greasybbs.com/SikPik/Home_Sik.html.

Full disclosure: Whetstine is the significant other of a longtime Fort Worth Weekly freelance writer.