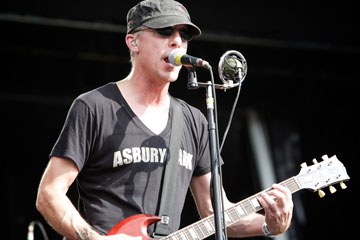 Two weekends ago at Austin City Limits, about 65,000 official ticket holders and thousands more who managed to infiltrate Zilker Park without paying a dime became a temporary small town. This year’s lineup featured some of the grunge-era’s finest, along with indie-rock’s latest and “greatest.” In other words, a big contrast between stuff and fluff.

Friday started out on a beautiful note. The city of Austin had re-sodded Zilker Park beforehand, and the whole place looked like a massive putting green. Pushing back the typical August date to the cooling fall helped make the overall experience more enjoyable.

On to the Friday shows:

Dr. Dog’s quasi-pop was warm and friendly. The Avett Brothers, unfortunately, were too acoustic and subtle for such a large venue. Coheed and Cambria offered a welcome dose of heaviness. But I could take only so much guitar showmanship before my head felt like exploding. The band is fun to see live, but its music lacks any sense of catchiness.

Daniel Johnston may be the father of the indie movement. His awkward self-reflection was a tad goofy. Makes you wonder what kinds of songs the crazy-eyed kid in the corner of fifth-period trigonometry might be concocting. Thievery Corporation’s multi-ethnic, electronic mellowness should have been satisfying, but the huge stage on which the band was playing had sound issues for anyone very far away. The band’s processed beats were overshadowed by the obnoxious twang of congas. Too bad.

Them Crooked Vultures — the new and untested union of Dave Grohl (Foo Fighters, Nirvana) on drums, John Paul Jones (Led Zeppelin) on bass, and Josh Homme (Queens of the Stone Age) on guitar and vox — was the big buzz band. And for good reason. I loved the music enough to fight my way all the way to the front of the stage. I’d never seen Grohl play drums, and now that I have, I dare say that’s where he should stay. TCV’s time-bending locomotive of oblivion took me somewhere I’d rather be – to a time when music was mean and had a backbone: no pondering, no sadness, all certainty. I can’t wait for the album. I’ll eat it up.

The Beastie Boys had to drop out of Friday’s headliner spot and were replaced by the Yeah Yeah Yeahs. Hard choice for me between them and Kings of Leon. But since my own band covers “On Call,” I chose the latter. Bad choice. What was once rootsy and guttural is now mediocre and arena rock-ish. We concertgoers were flooded by big guitars, run-of the mill beats, and choruses ad nauseum. Listening to frontman Caleb Followill speak about his band’s ascent, you would have thought that “Sex on Fire” was the best song ever written and recorded. Don’t think so, dudes. Next time I’ll opt for the Brooklyn trio.

Friday’s music was as pleasant as the weather, but I wasn’t feeling inspired. Saturday, however, the clouds rolled in, which wasn’t good for my recent recovery from the flu but good for my ears.

I got there early to check out Dallas singer-songwriter Sarah Jaffe’s set. North Texas was representing well. The Austin Chronicle had referred to her “mountain woman spirituality,” which I don’t really think fits. Her songs are barebones, and she does have a great, focused, and expressive voice. The vibe I get is tinted with hopelessness – something to which I, unfortunately, can relate. Even if the sound engineers didn’t want to transmit much more than acoustic guitar and vocals, the show was really good. Kudos to Jaffe for getting such an awesome gig. She deserves a better time slot next year.

Damien Horne had roots-reggae simplicity. When I walked up, he was singing a song with a refrain about how life would be so much better if “you” weren’t in it. Then he gave a spiel about how much music was available on-site. The irony was a little more intense than I’m sure he had planned.

After watching a forgettable few minutes of the Felice Brothers, I chatted with Dallas’ Jonathan Tyler and the Northern Lights. I had listened to their last record, Hot Trottin’, on the way down, and they do a marvelous, lovey-dovey blue-eyed soul thing. They were stoked to play ACL and unfazed by the potentially large crowd — after all, they had toured with Kid Rock and Lynyrd Skynyrd last summer. The heavy rain started just in time for their set, but they brought a boatload of energy to counteract the miserable weather. The crowd was seriously into the music.

The rest of Saturday was literally a wash. I opted for watching the TCU/SMU football game in the middle of a pro foosball tournament rather than sitting in the mud to catch Mos Def and Dave Matthews. I guess I’m not as dedicated to the music as I used to be, but no one can question my loyalty to the TCU football program. And they did win … easily.

Sunday showcased what I most wanted to see in Austin – The Toadies – so I was going despite the rain and the mud and the flu. I made it early enough to catch singer-songwriter David Garza’s set, even though I had to slip and slide through an ocean of mud to get there. Garza has continually reinvented himself since I first saw him in 1994. He has scads of albums, boundless creativity, and a solid following. This year’s incarnation features some stream-of-consciousness stuff set to blues guitar and electronic vibraphone (whatever that is). The set wasn’t breaking any ground, but it was entertaining.

Instead of sloshing around and getting dirtier than needed be, I stayed at the same stage for Terri Hendrix. Turned out she wasn’t there, but a decent art-rock band from Austin named White Dress successfully filled her spot, but enough of all that.

I had been in a hard, drumming mood all weekend. So who in the world would I rather see than The Toadies? I made my way to their stage – the big one – 45 minutes before their set, and still, the closest I could get was at least 15 yards away. Looking around, I could see how The Toadies attract a different crowd than your average ACL trendsetting band. Most of the people near the stage were in need of a haircut and a smile but not any more alcohol. Rowdy isn’t the word I would choose. More like ready. And, of course, the band delivered.

I may be biased, but it was the best thing I saw all weekend – by far. Everyone knew the words to all of the old songs and still seemed interested in the new ones from No Deliverance. A grunge-era band successfully translated into the future? Hooray! They didn’t play “Hell Below/Stars Above,” but I will forgive them because they included “Happyface.” The Toadies make standing in a pit of mud worthwhile. And that’s saying a lot.

Speaking of mixing old and new, it’s not working for Ben Harper, who also played ACL. I like his new stuff with his new band, the Relentless 7 (including Fort Worth’s Jordan Richardson on drums). The music is feisty and musically impeccable. But it doesn’t seem to be really live-performance-friendly. In previous years, I’d witnessed thousands of fans whipped into a frenzy and hanging on Harper’s every word. But by the end of this year’s set, there was a 6-by-10-foot hole in front of me, and I was fairly close to the stage. I’d never seen so many people leave a show early. Perhaps they were expecting “Burn One Down,” not modern-gospel-tinged Led Zeppelin. Oh, well. Hopefully, the transition will just take time. Tastes are hard to change, and I’m sure his massive fanbase will come around soon. I know a lot of people who really like the new material. It just might not be a marriage made in heaven.

And last but not least: Pearl Jam. A Democrat is back in office, and being openly (if not actively) rebellious is back in favor. Almost all of the 65,000-plus-plus folks stuck around for the show. The venerable Seattle rockers played the old and the new and at one point were joined onstage by Harper. I was too far away to hear anything, so I left. Might as well go to Target and get the new CD. It kinda beats sitting in the mud a mile away. As far as musical taste goes, apparently I’ve changed by not changing at all.