When the Fort Worth City Council last month granted a variance to Chesapeake Energy allowing it to drill gas wells that will be closer to homes and parkland than city ordinance generally allows, it didn’t seem like that big of a change. After all, since 2008 the council has granted almost every exception to the setback rules requested by the drilling industry.


But for critics of Fort Worth’s approach to gas drilling regulation, the variance – for a multiple-well site just west of downtown and near the condos and townhomes of the So7 development – marked a new and troubling weakening of protections for citizens. 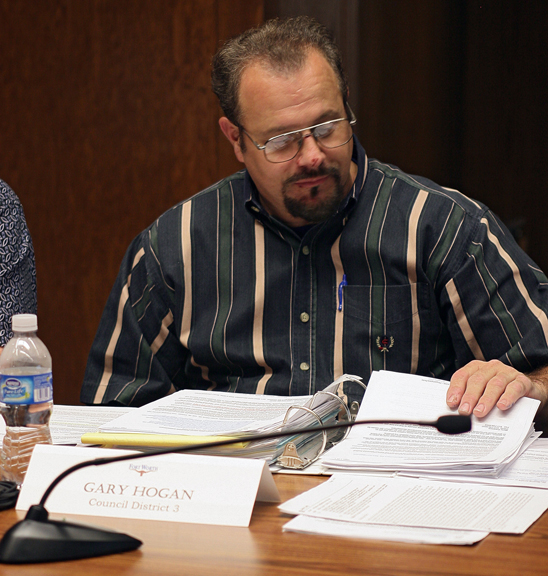 Gary Hogan, who helped write the city’s gas drilling ordinance, and others saw several problems with the council’s decision: First, the council granted the variance even though Chesapeake, despite being given extra time, was able to get waivers signed by only eight of the 22 homeowners who live less than 600 feet from the site.

And second, the drilling site is less than 300 feet from at least one home, as well as Trinity Park – but the city ordinance makes 300 feet the absolute minimum separation allowed between well sites and residences or parks.

“I found it unbelievable,” said Hogan, who served on gas drilling task forces in 2006 and 2008 and closely monitors the council’s actions regarding the drilling industry.

Council members approved the permit under an exception that allowed them to override the waiver requirement entirely. Hogen said the vote was an abuse of that clause in the ordinance.

Assistant City Attorney Sarah Fullenwider told the council that Chesapeake wasn’t bound by the 300-foot setback because the gas company bought the property before that setback was in effect. (The ordinance passed in 2008 increased the minimum setback from 200 to 300 feet.)

She later told Fort Worth Weekly in an e-mail that Chesapeake was right in claiming that the property was grandfathered because the company had declared its intentions to drill before the 2008 ordinance was approved.

The current ordinance generally requires a distance of at least 600 feet from the edge of a multiple-well drilling pad to the nearest protected area, which includes homes, parks, and schools. If a drilling company wants to drill closer, it must get signed waivers from all parties less than 600 feet away. Even that provision doesn’t allow any drilling closer than 300 feet.

Alice Cranz, whose home is less than 300 feet from where Chesapeake now has permission to drill, said she can’t believe “that the city council ignores their own rules. They’ve never met a well they didn’t want and don’t care whose property it ruins.”

Hogan pointed out that the wells planned for the site represent a lot of money for the city and Fort Worth school district. “You’ve got to remember that two of the largest mineral owners for that site are the Fort Worth ISD and the City of Fort Worth,” he said. “So in this case the city was looking out for its own pockets and said the heck with the homeowners.”

He said the provision allowing the council to grant a permit without waivers was “meant to be used in cases where just a small percentage of people objected to the well, or a company couldn’t find an absentee owner. The ordinance says you’ve got to get 100 percent of the waivers signed, with the override as just a way around one or two people who refuse to sign.”

The well site, called the Aussie Lease, is at 1291 Foch St. and will draw gas from beneath Trinity Park, the Will Rogers Coliseum, the Botanic Garden, the school district’s Farrington Field, and the luxury townhome and condo development called So7 – so named because it’s located south of West 7th Street. A road built for rig traffic passes  within 50 feet of the Van Zandt Cottage, and some fear that the heavy trucks could put the historic home at risk.

Trinity Park and Cranz’ home are roughly 250 feet from the pad site boundary, at least according to Chesapeake’s own measurement, given in a letter she received from the company months ago. “But later, at a city council meeting, a Chesapeake representative said the well itself would be set back an additional 75 feet, making the total over 300,”  Cranz said. Her house looks out onto the tall wall of sound-reducing bunting that Chesapeake recently erected.

The council first heard Chesapeake’s request on Aug. 4. At the time, the gas company had collected eight waivers. The council asked Chesapeake to continue to negotiate with the community.

Chesapeake was back before the council on Aug. 18, and again the council gave the giant drilling company more time to secure the necessary waivers. But even two more weeks didn’t help. By Sept. 1, Chesapeake had secured not even one additional waiver.

Nonetheless, council member Joel Burns, after adding several stipulations to the permit, moved that the variance be granted. The other five members of the council present voted with him.

“Chesapeake had weeks to get those waivers, and they couldn’t do it,” Hogan said. “They didn’t even get half of the 22. And you’re supposed to get 100 percent.”

At that meeting, Burns did raise the issue of the well pad being less than 300 feet  from both Trinity Park and Cranz’ home. When the Chesapeake spokesman said that restriction didn’t apply because of the grandfathering, Fullenwider agreed.

But Hogan said he’s not sure that is true. “Just because Chesapeake bought the property before the new ordinance was passed, why does that automatically grandfather it into the old ordinance as a well site? Was it registered as a well site?” he said.

In fact, according to city officials, the site did not receive a drilling permit until May 22, 2009, but still falls under the old ordinance because Chesapeake had filed a report with the city of Fort Worth announcing its intentions to drill there, before the newer ordinance took effect on Jan. 1 of this year.

Fort Worth Weekly requested a copy of that filing from Susan Alanis, director of the city’s Department of Planning and Development. Alanis said the document would be provided, but the Weekly had not received it by late Tuesday.

Burns said he is satisfied that the 22 families affected by the Aussie Lease drilling are amendable to the gas activity near their homes. In an e-mail, he said that, between the first time Chesapeake’s request came before council and the Sept. 1 meeting, “I met numerous times with residents of So7 … and other interested parties. Based on feedback from these meetings, I feel that there was significant community support for this application.”

He suggested contacting David Steckler, whom Burns said was president of the So7 homeowners association. Burns said Steckler had polled the association members and found that a “significant majority” of them “were either in support or at least were not opposed to the drilling operation.”

In actuality, Steckler is a member of the homeowner group’s board of directors but not president. At the Sept. 1 meeting, he told the council that he had spoken with the residents of So7 who had not signed the waivers and the majority were “OK with it.”

“That’s what we’re dealing with,” said Hogan. “Here is this fellow who has no written authority to speak for anyone other than himself, and his word that people who had not signed waivers were [actually] in favor of the drilling is what counts with the council.”

Steckler said he never claimed to represent the homeowners but merely made a report of his findings, as asked. He told the Weekly that some people who hadn’t signed waivers “told me they just didn’t feel like going to the bank to get them notarized.”

“Nonsense,” said Cranz, when told of Steckler’s comment. “I like David Steckler but that is just nonsense. This is a very well-educated community, and if they had wanted to sign the waivers they certainly would have gone down to the bank and signed them and had them notarized.”

In his e-mail, Burns noted that he added important stipulations to the Aussie Lease permit before leading the move to approve it. Those stipulations included that drilling would be allowed initially for only two years, followed by two years without drilling. (The stipulation doesn’t keep Chesapeake from reworking or refraccing the existing wells during that time.) The permit also requires installation of sound blankets around the site and rubber mats on the drilling rigs to mute rig noise and directs Chesapeake to consult with the Friends of the Van Zandt Cottage and the Texas Historic Commission on any survey work needed in connection with the road that will carry heavy-truck traffic to and from the rig.

Asked whether the council’s decision makes the waiver process hollow, Burns passed the question on to Fullenwider.

Fullenwider’s reply was to quote the portion of the drilling ordinance that allows variances to be granted either by written consent from all those with nearby interests or by the council’s own decision. She added that the ordinance “allows the operator to choose which avenue the company wishes to take to be granted the variance.”

Hogan said that, after the variance was approved, council member W. B. “Zim” Zimmerman told him that if some people didn’t want the drilling, they should have come to city council to say so – that, in effect, not showing up constituted tacit agreement. “But there is no requirement [that those opposed to a permit] come to council,” Hogan said. “Those homeowners voiced their opposition when they didn’t sign those waivers.”

Cranz is disgusted with the outcome. “Joel Burns is our city councilman who did not protect us,” she said.

“This is simply another move to eliminate the protective distance the gas well task force set up,” said Hogan. “This might be the first time the council has ignored [the absence of] homeowner waivers, but in more than 20 cases since the beginning of 2008, it has approved distance waivers from parks. That’s every case they’ve heard. What’s next? Schools?”