The Future Unlived’s music is “built upon revenge,” according to frontman Danny Future. Case in point: “Machine,” a blues-rock stomp in which Future, whose baritone is reminiscent of Ian Astbury’s (The Cult) and Josh Homme’s (Queens of the Stone Age), swaggers through a tale of good love gone bad. You can almost see the chip on his shoulder. “Typical story,” he said. “This girl and I broke it off, and it wasn’t all smiles and handshakes.” In other words, he said, “She took it to me pretty bad.”

But the Arlington band’s post-punk music is composed of more than just black valentines. Rounded out by guitarist Deff Javis, drummer Justin Tyme, and bassist The Professor, The Future Unlived throws everything into a pot — Kyuss’ desert-rock, punk’s rawness, The Toadies’ crispness — and whips up something that’s break-neck enough for the kids and classic-rock-ish for the adults, always an intoxicating recipe. 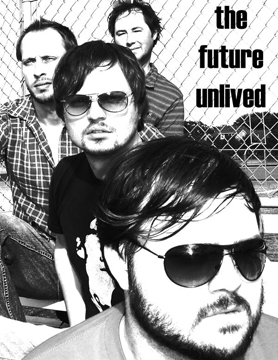 Formed in 2005, the band is working on its third recording, an album to be released early next year. Future said to expect more of the same: dusty scorchers (“Wage War,” “Western Skies”), a little T. Rex-inflected glitter and glam (“Devil on the Patio”), and revenge served ice cold (“Childish Lies”), a track whose wispy piano intro belies the song’s sinister hardcore heart.

Much in the way that The Toadies couldn’t get arrested here but were stars seemingly everywhere else — they broke out in Tampa, of all places — The Future Unlived has been having a rough go getting local gigs. Out of state? No problem. The band recently returned from a tour of the Rocky Mountain region. “We have better gigs in Boulder and the Colorado area than we do in our own backyard,” Future said. “Maybe it has to do with us being from out of town [to Coloradans], not too sure.”

Not that the band’s looking for pity, but you’d think, considering The Future Unlived’s caliber, that getting local gigs wouldn’t really be such a problem. “The scene here is built primarily off of nepotism,” Future said. “Landing a decent gig is a real episode in teeth-pulling.”

After a group’s been together about five years, hard career decisions start coming up — in this case, all the bandmembers have day jobs. “We’ll keep making music and trying to gig,” Future said. “If we can grow and gain a fan base, then we’ll take it from there.”

Thu w/American Mantra, Most at The Cavern,