Prolific indeed is Eaton Lake Tonics frontman Domenic “Tony” Ferraro, who’s already released two of this year’s most intriguing local discs under his literary-inspired alias Bob Fante: Rancho Folly V and Proud Now American, the latter a split LP with The Ox Magnolia. Wouldn’t you know, this ELT release might just be the best of the lot. 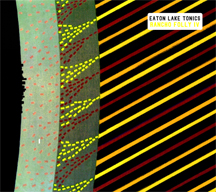 Though some of Ferraro’s projects – particularly under the Fante rubric – might be resolutely lo-fi and DIY, it’s still puzzling to many that this publication classifies his band as “avant-garde/experimental” around Music Awards time. First and foremost, Ferraro is a pop tunesmith of great facility. His catchiness is his signature strength. Sure, he might throw in a soupçon of dissonance here and there (always in the accompaniment, never in the actual melody), but that’s just a red herring. Rancho Folly IV is as accessible a rock record as you’ll hear this year.

Ferraro is not above recycling repertoire, either. “Business Just Gets Bad,” the gorgeously anthemic “Monty and Lettie,” “How To Get Out of My House,” “John Fogerty,” and “Barbara” all appeared on Rancho Folly IV, but here they are radically different – much more fully realized and powerful. The last two, in particular, are transformed into extended tours de force, courtesy mainly of his full band. The quaint charm of the Fante versions is replaced by an in-your-face immediacy, with interesting instrumental interplay between Ferraro and longtime collaborator Ryan Thomas Becker. Indeed, the new “Barbara” starts out sunshine-poppy and winds up sounding downright lysergic.

Vocally, Ferraro can’t seem to wipe the wiseass smirk off his mug (think: Ben Folds or the guy from Green Day), but his music is smart and surprising enough to hold your interest through its myriad twists and turns. Cop via www.myspace.com/numericpiglatin.