If The Fourth Kind had come out next spring, we could have dismissed it as a Johnny-come-lately rip-off of Paranormal Activity. Coming out now, this alien-abduction flick will likely receive a fairer hearing because writer-director Olatunde Osunsami clearly came up with the same idea – using home-video footage to give his horror film a documentary feel – on his own. This doesn’t make his movie good or anywhere near as effective as the other vérité horror flick. However, it does make The Fourth Kind an instructive failure. 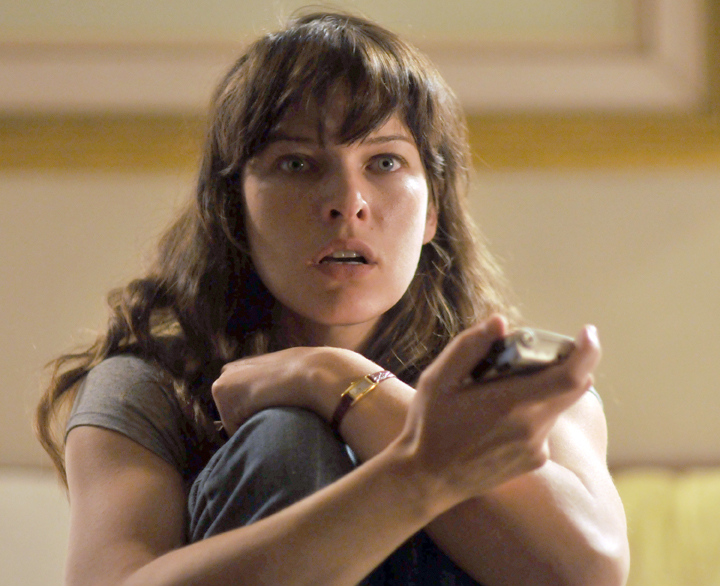 The film begins with star Milla Jovovich addressing the camera not in character but as herself, delivering a disclaimer that what we’re seeing is based on real events. (As far as I can tell, this is bogus.) In the rest of the film, she plays Dr. Abigail Tyler, a traumatized psychiatrist who witnessed her husband’s murder but has blocked out significant portions of her memory of that. Now she’s carrying on his work researching the sleep patterns of people in Nome, Alaska, and she turns up some disconcerting similarities in their stories of insomnia, particularly their shared conviction that an owl has been watching them in bed. Under hypnosis and regression therapy, those subjects all experience total panic, and some of them experience stranger things that lead Dr. Tyler to think that they might have been abducted by aliens. Advising her academically are her skeptical mentor (Elias Koteas) and an expert on ancient civilizations (Hakeem Kae-Kazim) whose knowledge of dead languages comes into play.

What distinguishes the movie is its use of purported documentary footage, including Osunsami’s interview with the “real” Dr. Tyler. There’s also grainy video footage of her sessions with her sleep study subjects, often placed on a split screen alongside the lushly filmed re-enactments of those sessions. Perhaps there’s a commentary on the artificial nature of fiction cinema going on here; the people in the “real” footage look much less polished than the actors portraying them. That’s the only clue I have as to what the juxtaposition is supposed to accomplish.

In fact, I wonder why Osunsami bothered with the dramatizations at all. They aim for heft, but they’re hopelessly crude in their treatment of the characters’ emotions, never more so than when the disbelieving local sheriff (Will Patton) removes Tyler’s son from her custody. Osunsami mishandles the drama both as writer and director, the amateurish Jovovich is way out of her depth in this role, and composer Atli Örvarsson turns in an absolutely wretched score. The movie tries to introduce a note of psychological realism near the end, which feels tacked on, doesn’t jibe with the tone of the rest of the movie, and doesn’t even make much sense in and of itself. Worst of all, none of the dramatized portions is scary. So much of the movie ends up feeling like filler.

All the scares come from the fake documentary footage, and as was the case in Paranormal Activity, what we don’t see is more frightening than what we do. One effective scene revolves around an audiotape of Abby dictating notes in bed, which records some highly unpleasant noises after she falls asleep. The hypnotized subjects appear to be levitating and having their bodies twisted into unnatural shapes, but we can’t be sure because the supernatural activity causes the video quality to fuzz out. The final interview with Dr. Tyler is perhaps the most unsettling, a picture of a now-skeletal woman consumed by demented belief.

The question, then, is: Why didn’t Osunsami do up the entire movie in this way? Perhaps he was aiming for a hybrid of styles like District 9, but the South African film combined documentary techniques and traditional storytelling with far greater skill. The Fourth Kind occasionally attains the skin-crawling power that it’s aiming for but not often enough.