Under normal circumstances, three guys who all work at art museums starting a band together would either be the beginning of a lame joke that only art history majors would get or the kind of buzzworthy event that would make UNT composition majors salivate.


Throw in the fact that two of the guys are in their 40s — and no one in the band owns skinny jeans — and the picture gets even more confusing. But such is the case for Great American Novel, a rock trio from Fort Worth. 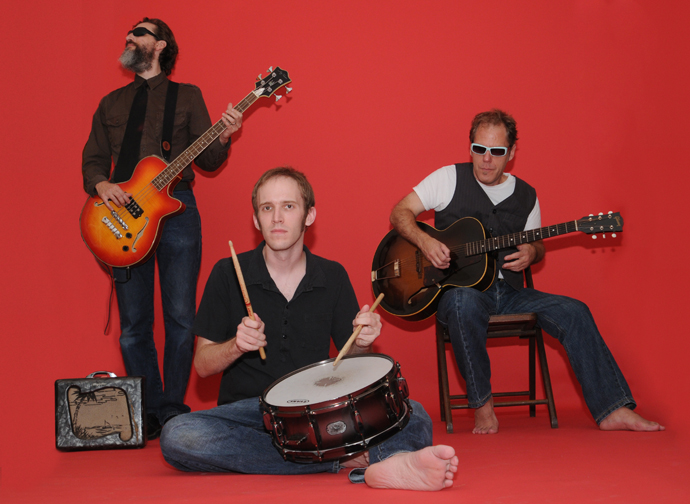 “We steal from the thieves,” said lead vocalist and guitarist Will Gillham, who works at the Amon Carter Museum as director of publications. “It’s all been done before. It’s folk-punk rock. My wife says it’s punk-y. We’ve had people tell us everything from Nirvana to Firehouse to even The Who”

The band formed in 2006, at the suggestion of Gillham, who asked bassist and co-lead vocalist Rob Caslin to help start “a loud guitar band,” as Caslin retells it. The band’s original drummer moved to Seattle over a year ago, and James Lassen, who works with Caslin at the Modern Art Museum of Fort Worth, took over.

After choosing a couple of names and finding out they were already taken, Gillham, Caslin, and Lassen settled on Great American Novel, referring to a song by iconoclastic Christian rocker Larry Norman, whose music, like the band whose name he inspired, is agreeably schizophrenic.

Gillham and Caslin share songwriting duties as well as lead vocals. The majority of songs featured in Great American Novel’s live sets are Gillham’s, though the two wrote about the same number of songs on the group’s forthcoming album (being recorded now at Fort Worth Sound). The two, however, are co-writing new material. Stylistically, Gillham and Caslin share a lot of common ground, but there also are some distinct differences. Gillham has a darker, more sardonic tone. His songs are often tightly spun narratives centered on a main character. Caslin takes more of a poetic, metaphor-laden approach. His songs are mostly about love and its myriad ramifications.

“I kind of see us like, he’s the chrome and I’m the black,” said Gillham. “I do tend to have an apocalyptic streak … just sort of a nihilistic darkness.”

The Gillham-penned song “Dread” — about post-9/11 anxiety and Islamic fundamentalism — showcases his Mad Max streak. The song ends on a refrain of “Not if, but when.” Similarly anxious, “The Kitchen Song” is about a kid who witnesses his boss’ murder, and “Crazy Johnny and Mexican Joe” is a Natural Born Killers-esque narrative about two drugged-out vigilantes.

Caslin’s “Gods or Saints,” addressed to the universal “you,” is about the confusion of love: “Your face appeared to me / Frozen in the dark / Ice-cold eyes, mystified / Steel-hardened heart.”

“There’s a lot more salvation in love in [Casslin’s] songs, which is refreshing, which the band needs, and our songs need, and I need,” said Gillham. “He shines us up.”

The band hopes to complete its album by the new year. Some old tracks can be heard at www.myspace.com/greatamericannovelband. However, Great American Novel, according to Gillham and Caslin, doesn’t have rockstar aspirations and doesn’t plan to tour extensively anytime soon. (Gillham and company aren’t intrinsically opposed to hitting the road — they recently played a gig in New York City, opening for a friend’s band.)

“We all get along, and we enjoy getting together to rehearse,” Gillham said. “We all carry our own weight, and we’re not flakes. We really want to put out an album to have a document of what we’ve achieved together.

“Really, we just want to play,” he continued. “It’s not like at this point in my evolution I’m ready to live out of the back of a van.”